Urban Climbing in New York City: The Story of a Guide 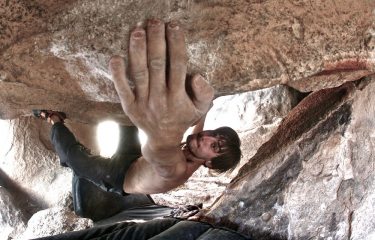 Gazleah30th July, 2014
This has been read 18,186 times
Gaz Leah is a Brit living in New York, and has released a guidebook to bouldering in the Big Apple. Here he talks about his quest to find real rock in the concrete jungle, discovering the secrets of New York bouldering, and getting to grips with his first ever guidebook project.

This lesser known fact may come as a surprise to most people. New York's not exactly the place you look to go when scouting for your next climbing destination. However, hidden within the various parks of the city are a large number of rocky outcrops that have a culture and community all of their own. Add into the mix the fact that people have been establishing routes here since the 1970's and you have a great climbing location, if only you knew where the boulders where.

I moved to the Big Apple in April 2012. Being a self-proclaimed climbing addict, I was a little disheartened to be moving away from the beautifully shaped gritstone crags of the UK to one of the world's largest metropolitans. I decided I was going to make the most of my time here in the 'concrete jungle'. After all, I'd heard that there were a couple of climbing gyms including Brooklyn Boulders, the largest centre in the city, so all was not lost. The gym was bustling with people and for a short time I was satisfied with my new home. I'm all for plastic pulling when it comes to training, but I'm more of an outside climber myself. After a couple of weeks, I started to ask around to see if anyone knew of climbing spots nearby. There were a few people that knew of some climbing in Central Park at a place called Rat Rock, but that was all. That night when I got home, I promptly began my search for rock climbing in the city and the location of Rat Rock with the intention of going there the next day.

I showed up at the rock early and to my surprise found a group traversing it. They were attempting a route named The Polish Traverse, a notoriously difficult V5 that was the test piece of the area. They were very welcoming and helpful in pointing out the boulder problems they knew, but when I asked where I could find a complete guide they had no idea. It turned out there was no real guidebook to rock climbing in the city and the routes were simply known through word of mouth.

I returned to the rock several times that week to work on problems that locals had pointed out and on one of those days I met a couple of guys named William 'Bill' Piehl and Lorenzo Montanez. Bill had been climbing in the city for twenty years and filled me in on the history of climbing in New York including the many famous locals and visitors that climbed there; Yuki Ikumori, Lynn Hill, Ashima Shiriashi, Sasha Digiulian, Kevin Jorgeson and Ivan Greene. Even Sir Edmond Hillary was rumoured to have scrambled around on the rocks of Central Park. All this knowledge though was carefully held in the minds of locals, generally un-documented and in danger of being lost to time. I came to a conclusion. Why don't I document this knowledge in the form of a guide allowing more people to enjoy rock? It would build the community and immortalise the rich history of climbing in the most unlikely of places. How hard could it be?

Armed with Bill's knowledge, great support from the local climbing community and my seemingly endless free time while I waited for my Visa to arrive, I decided I would go ahead with the book project. We began documenting in May 2012 and figured we would have it all done by September. It quickly became apparent that my four month turnaround was an overly ambitious goal even with the forty hours a week I was spending writing, shooting images and exploring the city to find more crags. September came and went and I had only managed to document ten areas of the more than thirty we had found from our hundreds of hours travelling pretty much every street in Manhattan in search for rock. One of the main things slowing down progress was getting images for the guide, not helped by the fact that firstly I wasn't much of a photographer and just couldn't seem to capture the true feel of climbing in New York, and I didn't know many climbers to shoot pictures of.

In a wonderfully fortunate turn of events which is characteristic of New York, I met a brilliantly talented climbing photographer by the name of Francois Lebeau while at a gallery viewing in Williamsburg. After a brief chat we decided we would work together and organised to go shoot some images that week. With his talent behind the camera and my time freed up to focus on the writing, the project began to build momentum. Over the next few months, the guide quickly came together and Francois was out relentlessly snapping climbers from the local community, plus one or two celebrities.

By December, news of the guide was now humming around all the gyms with people psyched at the thought that they could climb in their city. We had completed documenting the hundreds of routes, both low and highball, with grades ranging from VB to V12; all there was left to do was find a graphic designer with some urban flair to do the book justice. Once again, the perfect person showed up at the right time in the form of talented designer and climber Anna Porreca. With a background in fashion advertising, Anna worked her creative magic on the guide, capturing the feel of the city's unconventional climbing perfectly.

By November 2013 after an estimated 2000 hours of combined work effort, we were finished and the guide was released by Sharp End Books with support from the Access Fund. It's taken blood, sweat and plenty of flappers to bring this guide to you and we're psyched to share this with everyone. My hope is that this guide will bring together the fragmented climbing community in New York whilst preserving and enriching the areas of history, sharing it with those who visit. I hope that this guide will pique your interest into visiting the boulders of New York. Perhaps I'll see you there?

There are over 30 bouldering locations in New York City and hundreds of boulder problems. Picking the best hasn't been easy but here are some of the favourites:

The book is available at REI, Rock and Snow, Sharp End Publishing and at some stores in the UK.

Thanks to Tiffany Stoneman for her work editing this piece.

Return to Latest Articles or view other Destinations
UKC Advertising

Sufferfest - Biking and Bouldering in the Lakes

Cyborg-Climbers - Come to your Senses!

williap
30 Jul, 2014
I'm so gutted this wasn't out while I spent a few weeks in New York last year! Totally should have spoken to Adam Radcliff and got linked up with Gaz - good effort mate
Paul Phillips - UKC and UKH
30 Jul, 2014
Looks like there's some great lines. Nice one Gaz!
Ackbar
30 Jul, 2014
Cool article. Like someone else said, would have been nice to know about this when i was there. Not surprised that this was created by a Brit. Guidebooks and documenting climbs seems to be a british obsession. From my limited experience i find that outside of britain, boulderers tend to like to keep their knowledge to themselves. Probably an access thing.
owensum
30 Jul, 2014
Yeah a surprising number of guidebooks to major US/canadian destinations have been written by Brits - Bishop bouldering (Wills Young and Mick Ryan), Squamish climbing (Kevin McClane), Rifle climbing (Dave Pegg, also head of Wolverine publishing).. well cant think of any more, but thats a few...
rgold
31 Jul, 2014
Red Rocks, A Climber's Guide, by Jerry Handren. He's British yes?
More Comments
Add Comment