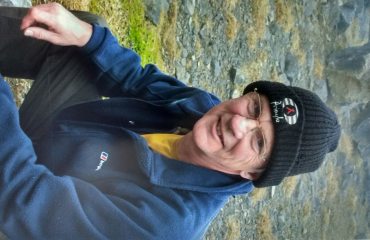 Castlebergh has been the backdrop to a landscaped, hillside walk for well over 100 years and one of the large lower terraces once hosted swing-boats and other recreational park apparatus. There was, however, no recorded climbing history here prior to 2009. A lone relic of a rusty piton halfway up the central corner is no doubt the result of an aid climbing attempt probably back in the 1960s. Others may have tried but without the extensive clean-up operation undertaken recently traditional climbing, even up the easier grooves on the left, would have been a worrying proposition. Most climbers just assumed that being so close to the town centre climbing would not be permitted.

Early in 2009 a rock-fall caused by invasive tree roots on one of the lower, subsidiary buttresses was the catalyst which forced the Town Council to act and close the area to the public. A subsequent chance conversation between Glyn Edwards and Councillor David Heather set a chain of events in motion which saw a unique collaboration and an intense period of activity by a group of eight local climbers who, in conjunction with the council and supported by several local traders transformed the cliff into the excellent climbing venue it is today. During May and June several tons of loose rock and vegetation were removed and 22 routes were created. The main activists were, Nigel Baker, Paul Clarke, Glyn Edwards, Paul Farrish, Bob Larkin, Keith Morgan, Dave Musgrove and Johnny Walker. Most of the climbs were joint efforts between several of the above. Other regular contributors during this period included David Campbell, Mick Haffner, Angela Soper and George Wright who all did their bit in brushing, cleaning, checking and pruning.

Special thanks go to the Council, local residents and traders whose names or logos are now enshrined in the route names on this cliff. They understand and value the contribution that climbers can bring to the vitality of their town, and the wider area, which has long been a centre for limestone climbing in the Dales. Their sponsorship will help to further the work of the Yorkshire Bolt Fund on other nearby cliffs. Your custom in the local shops, cafes and refreshment houses etc will help them preserve the traditions of rural market-town life. You know it makes sense.

This crag is the prominent cliff holding up the flag-pole directly above the town centre of Settle. It faces south-west, gets lots of sunshine and gives great views down to the market place. The previously quarried walls give rock of variable quality with easier climbs on the slabby left wing and steep undercut routes on the right. The cliff dries quickly, holds no seepage and the steeper routes can be climbed in the rain. It should also feel sheltered and be easily accessible in the winter months Virtually all routes are protected with stainless steel resin-fixed bolts and double bolt lower-offs. Please don't attempt to climb out over the top or remove any more cliff-top vegetation, particularly on the left side of the cliff. The prickly bushes are there to deter the public from getting too close to the edge.

The cliff can be accessed via gates in Castlebergh Lane or Constitution Hill leading to various paths which zig-zag up to the crag. Parking is a difficult problem for residents in these narrow streets so please use public car parks around the town centre. The cliff and land below are owned and managed by Settle Town Council who have given permission for the development of climbing here. However, please remember that the area is also used by local residents and visitors so take extra care if members of the public are below you as you climb. It is also worth remembering that your voices can be heard all around the town. Please temper the expletives as you fail yet again on your red-point!

The first five climbs start from the grassy terrace 3 metres above the path on the left side of the crag. The first two are to the left of the band of overhangs.

A pleasant wall on the left end of the crag leads straight up to a sloping ledge. Step right and up to a steepening finish in a shallow groove.

Sponsored by D&R Clements from the 'smithy' below the crag. Start on clean rock just left of the shattered corner and 'forge' your way direct to the overlap and a move right. A couple of high stepping layaway moves gain the lower-off in a short corner on the left.

Beyond the band of overhanging rock and towards the right end of the terrace climb the shallow double groove to a lower-off just left of the upper arete.

A narrow broken groove takes the middle ground leading to one tricky move to gain the lower-off just right of the upper arete.

The most prominent open groove from the right-hand side of the terrace gives a pleasant introduction to the cliff.

The next 5 routes take the prominent central buttress from the lowest point of the crag directly below the flag-pole.

A long, easy but satisfying, rightwards-trending slabby line up the Central Buttress to a lower-off in the upper corner left of the white tower.

An easy-ish but pleasant climb. Climb the lower rib in the centre of Central Buttress and then easier ledges lead to steep cracked grooves and the lower-off of the previous route.

Great Entertainment! Just right of the low, hanging rib is the start of a vertical fault line of crystalline rock. The climb follows this for most of its length before stepping left for a 'grande finale' up the prominent white tower below the flag-pole.>/p> 7.6.09 Bob Larkin

The clean and 'exposed' white pillar on the right side of the central buttress has some long reaches or wide spans in its middle section below the big ledge. Finish up the top corner to join the final moves of the next route. Can be clearly seen from the café window!

A steeper than it looks groove up the right edge of the central buttress leads to a ledge and then the left side of the wall above with a tricky move to the lower-off.

This is the area from the prominent overhanging corner to the right-end of the crag. All the routes here are steep and powerful climbs.

The obvious narrow hanging groove on the left of the big corner is gained and followed with difficulty using improving holds on the left rib before a step back right gains the ledge. The upper wall is less strenuous but more technical. The lower-off is in the bay above.

A fine pitch leading to the upper arête left of the big Corner. The overhanging lower wall, is climbed via a tenuous crack-line, mostly on good but spaced holds, stepping left near the top to the big ledge. The more technical upper arete is started direct and climbed with a sense of urgency until the top and the lower-off are reached.

The start of the previous climb leads naturally and directly into the upper corner of the next route to provide a superb and sustained link that is 'practically everything' you could wish for in a classic rock-climb.

A superb and strenuous line but never technically too hard once you've mastered the initial bulge. Assuming you do so, bridge steeply and precariously up the lower corner to good flakes below the roof. Traverse left and pull up strenuously with a couple of long reaches into the upper groove. A semi-rest is available by continuing the mid height traverse to the arete before returning for the big moves into the upper groove.

You might need big 'arms' for this one. A slightly more direct version of Castleberg Outdoors which climbs the steeper black central feature and negates the temptation to sneak out left for a rest. At the top of the first corner continue via the three mechanical bolts to regain the upper corner at its final bolt. Same grade but a bit more sustained – thirsty work?

Let's hope so! The undercut wall just right of the main corner is gained with great difficulty from blocks below the roof. At the second bulge step up right to a resting position before climbing the arete and moving left with interest into the impending upper groove.

No plants were up-rooted during the preparation of this climb! An excellent line up the centre of the right wall giving sustained but varied climbing. Start from the prominent 2 finger shot-hole and, if you manage to leave the ground, finish with some interesting bridging in the upper groove.

Using the shot-hole with the left hand dyno for the obvious ledge. Slopers on the wall above may just give enough grip for an even harder dyno to the half-way ledge. Most mortals will move further right to share holds on the crux of the Bike Shop which is easier but scarier! From the break move left to climb the bulge and upper crack. This is more straightforward but still a challenge for those of a nervous disposition!

4.7.09 Nigel Baker, Dave Musgrove, Keith Morgan (7a version) ).The lower wall was top-roped by the direct 7b method by Ben Hirst before the bolts were placed.

An interesting ride! Make an undercut 'jump-start' just right of the shot-hole to gain jugs and then hang on tight for an awkward sequence involving long reaches and hidden holds to the big ledge. Use the big flake on the left lightly, and with some trepidation, to reach over for better holds above the roof.

A steep and highly technical start gives great moves up and rightwards to large blocks. Pull out 'carefolly' past these.

Get 'charged up' for the powerful problematic start up a hanging, slanting flake which fortunately soon eases to better holds trending left near the top.

A useful variant as a warm-up for the steeper routes is to link the start of Settle Injuries Clinic to the finish of Mounsey's Electrics.

By the time you've worked your way to this end of the crag you just might be in need of a bit of treatment for over-stretched tendons. This last route is also steep but short lived, a useful warm-down perhaps.

Not too hard if you've done everything else but still a route you may have to 'train' for! This fine and pumpy number, rattles along the obvious break that crosses the Right Wall from right to left. Once the 'platform' on the left of the corner is reached follow the finish of The Maypole Inn and, before you run out of steam, reach across to the 'buffers' of Off the Rails. Some long clips are helpful to avoid rope-drag.

The development of Castlebergh Crag came about as part of a unique collaboration between the council, local businesses and climbers. You can read more about what happened in this UKC news report.

Thanks to Dave Musgrove and Nigel Baker for their contributions to this article. 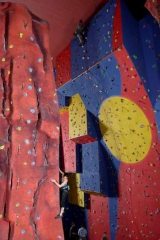 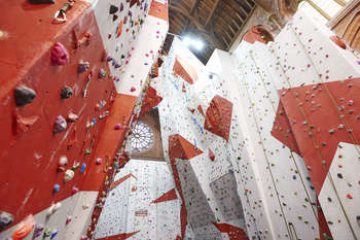 Tyler
9 Jul, 2009
Is this using the same star system as everywhere else?
Alex Thompson
9 Jul, 2009
Oooh you cynic...
AJM
9 Jul, 2009
Just you wait til Bruce Hooker hears about this - we'll be hearing about how this will inevitably lead to grid bolting on every crag forevermore! AJM
Simon Caldwell
9 Jul, 2009
you think this won't set a precedent?
Andy Farnell
9 Jul, 2009
First Castlebergh, next is Cloggy ;) Andy F
More Comments
Add Comment