The Fiendish guide to climbing in New Zealand

Share
Fiend 28th July, 2003
This has been read 33,659 times
Share
New Zealand climbing? Pretty damn good if you ask me. The crags are well spread out, but varied, accessible, with lots of fun sport and trad climbing. Plus the country is civilised but sparsely populated, the weather's okay, and they do steak and cheese pies. What more do you want?? As you'd expect, though, with a less developed climbing scene, there's a good blend of information, mis-information and occasionally dis-information in the local guides. Thus this guide should give you a bit of perspective whilst avoiding the over-intimacy of the locals and the fuckwittedness of some other views we've seen. Although it's unashamedly biased towards stuff we actually did, it's supposed to supplement the information available in the published guides so read those carefully. Enjoy. Any comments or queries please email Fiend.

Getting around: Combine the traffic of Scotland in the early hours, a Japanese-orientated car market so cheap they almost pay you to have cars, and petrol at "proper" prices, and it's clear what's the best way to get around. Pity the speed limit's only 62mph tho. Go cheap or save up a bank-breaking 3 grand, treat yourself to a rudified Toyota Celica or Subura Impreza and join the other hoons.

Eating: Food is cheap and plentiful, although if you're unfortunate enough to have chosen vegetarianism as your calling, you might struggle. Supermarkets, take-aways, cafes, and good fish and chip shops abound. Recommended highlights include: The plethora of cheap Asian eateries in all cities, the ubiquitous steak and cheese pies, Paddle Pops ice creams and Hubbards cereals. Ef liked the cafe scene - funky places, great savoury muffins, good coffee.

Sleeping: Accomodation is also plentiful. Be warned that it gets cool at night even in summer. The usual options include car+tent, camper van, or perhaps most sensible, car+campsite cabins or hostels. Likewise it's fairly cheap, though it pays to look around for the best places.

Weather: Hot sun, cool breeze, fresh showers sums up NZ. The weather changes very quickly so don't be put off by rain as it often blows over, and take forecasts with a handful of salt. Remember this is upside-down land so the seasons and sun direction are opposite - and although the air is often cool, the sun is bloody fierce indeed. Beware of North facing crags and dying of sunstroke. The warmer North Island has a climate that spreads sunshine and showers across the whole country, while in the cooler South Island the Southern Alps keep the West rainy and the East dry. Most guidebooks have good information about how well the crags are suited to various weather conditions.

Grades and stars: Once you've got used to a crude numerical system that tells you neither the state of protection nor the hardest moves, the grades are fairly servicable. See the UKC and Rockfax grade tables to begin your confusion.
There is a definite variation from area to area, this is mentioned in each area's section. Be aware that there are few good genuinely easy routes (10-14), and they can be underused as the wall-bred apes jump straight to 16+ where a better choice of climbing begins. To add further demoralisation, "moderate climbs" don't mean that at all, they mean "mid-grade climbs", usually around 18-20.
Stars are pretty reliable although there's a quite a few excellent understarred routes. A couple of guides use a sparse single star system which is not particularly informative - thus spying out good unstarred routes is more relevant.

Guidebooks: I think one should be wary of Climbing New Zealand by Posing Productions. Although it gives an overview of most of NZ, and along with South Island rock it is available in the UK, we thought it an amateur effort and found the information patchy and sometimes unreliable. Instead....

North Island:
Northern Rock - Ngahere, Ti Point, Mt Eden and a few other Northland crags. Single stars only.
Central North Island Rock - Good for Froggatt, Wharepapa South, the adventurous Mangatepopo valley, and some minor Taupo crags (note that the excellent Motuoapa is now banned).
Or alternatively both the Froggatt and Wharepapa guides - all the climbs but no star system.
New Ignimbrite Climbs - all the other ignimbrite crags, but check the update sheet too.
Waipapa - available from Bryce's
Whanganui Rock - Single stars only.

South Island:
South Island Rock - just about everything except Wanaka. Comprehensive if slightly variable in accuracy.
Paynes and Beyond - available from Hangdog and conveniently in easy (up to 23) and hard (23 +) versions. Includes the seacliffs and lots more routes.
Queenstown Climbing - should be back in print sometime soon, various other crags as well as Wye Creek.
Wanaka Rock - the guide.
There are also guides available to the Port Hills and Dunedin Rock but these don't have much useful extra information.

Websites: Don't expect an NZClimbing.com. Their climbing websites are few and far between. The only regularly updated one is www.mojozone.co.nz and there is also an older general site at www.climb.co.nz.

OK! On to the crags themselves:

You can also download this article in 3 sections as separate PDF files:

If you don't have Adobe Acrobat, or want to know more about it, you can download it from Adobe. Tips on downloading, saving and printing PDFs can be found on the Rockfax site. 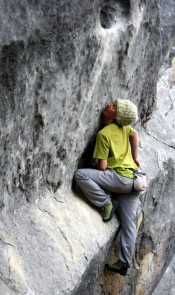 Over the past month a group of climbers from the New Zealand Alpine Team have been active in the Cordillera Blanca,...

Late in the afternoon of August 14, while guiding the New Zealand Prime Minister Helen Clark, her husband Peter Davis, and ...

Brothers Dez and Wiz Fineron aged 12 and 14 have recently emigrated from Llanberis to New Zealand. Rising stars in the North...

Michael Ryan
30 Jul, 2003
Good job (top job) Fiend. I enjoyed that. Another place to put on my ever expanding list of places to visit....I only wish those kids would grow up faster.....so they'll appreciate it more when we visit. Nice tone too. Verdy green. Mick
DazMan
30 Jul, 2003
Seconded ( I wish. I aspire to following him up an E0!). Good stuff Fiend, invaluable info' for those lucky enough to get the chance to climb down there.
Offwidth
30 Jul, 2003
I wonderered where he dissapeared too and why he has come back so miserable. Well done Fiend.
Fiend
31 Jul, 2003
Thanks for your comments. An important note: The individual crags in the Wharepapa area (e.g. Bayleys etc), Port Hills (e.g. Jane Fonda etc), Banks & Queenstown are not individually that important, in those cases it is the areas themselves that are important but the crags have points worth mentioning. I don't think the formatting shows this well but Charles wasn't able to change it before he went away for a bit =/.In reply to rich: Bouldering, yes. Best areas would be Castle Hill, Wharepapa Area, Castle Hill, Wanaka & Queenstown, Castle Hill, Elephant Rocks, and, err, Castle Hill. Generally lots to go at throughout the grades and usually good landings too, for the matless. See http://www.cactusclimbing.com/powerband/ for more info.In reply to BMC Alex: Oh thanks for posting that Alex, good to have some more photos to sell the climbing there.In reply to Ben: Nope didn't do either of those, wasn't really climbing 21 in the Wharepapa region =/.
Fiend
31 Jul, 2003
Yes.
More Comments
Add Comment
Loading Notifications...
Facebook Twitter Copy Email LinkedIn Pinterest