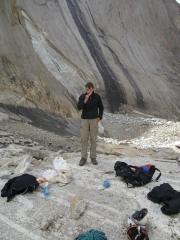 ian d f7th December, 2012
This has been read 16,001 times
In August-September 2012, Tom Codrington, Ian Cooper and Ian Faulkner from the Oxford University Mountaineering Club took on the Big Walls of the Karavshin in Kyrgyzstan. After patching their way across the country, mollifying men with guns and sharing vodka with local headmen, they arrived in the heartland of Russian Big Walling. A few days later they found themselves hundreds of metres up one of the biggest faces in the world. Ian Faulkner takes up the story:

Spinning in space several thousand feet above solid, safe ground, I struggled to recover my bearings while Tom and Ian watched gripped from above. I was a small speck on the North West face of Pik 4810, the most formidable cliff in Kyrgyzstan, having slipped my footing while seconding and been sent swinging into a pendulum. As I gasped for breath, I couldn't answer the anxious shouts of the others. A quick assessment revealed only a few cuts though, and I quickly started to recover from the shock. Pushing my jumars up the rope I continued to the belay where Tom and Ian were digging the first aid kit out of a haul bag.

We were five days up the 1200m vertical face of Pik 4810 in the remote Kara-su valley. It was a steep learning curve – only one of us had done any Big Walling before, and despite our expansive ambition and a number of new routes to our names, we felt distressingly under-prepared for the demands of this Kyrgyz giant. Our aim for the trip was to free climb the Mirror Route on Peak 4810, a feat accomplished only once before by Lynn Hill and Alex Lowe in 1995. The Mirror Route takes a sweeping diagonal line across the steepest and blankest part of the cliff, and won Alexey Rusyaev and his team of first ascensionists the National Soviet Climbing Championship in 1988.

The Russian climbing demi-gods also encamped in the valley were both amused and incredulous at the arrival of three cash-strapped students in their playground, intent on meeting this long-established record. Despite my swing on the fifth day, things were going well. We were climbing sufficiently fast and remaining on route thanks to our borrowed Russian topo from 1988. So far no crucial gear had been dropped, and although one of our ropes had been damaged, we had brought a spare. Unfortunately, on the morning of the sixth day the core on a second rope started to show through. With many days still to go we were forced to cut and knot the rope, then improvise a hauling system which would allow us to pass the knot.

The blank granite of the face made for occasionally desperate moves, uncertain protection and often required dangerously bold sideways pitches to link two features. Keen to avoid points of aid, we teetered across many of these 'death traverses' with our hearts in our mouths. Ian Cooper was making a fantastic job of freeing the hardest pitches as if they were single-pitch sport, occasionally taking long falls on sparsely-protected F7b+ moves.

On the seventh day Ian fell ill and made an unsightly mess of the wall beneath our portaledges. Luckily his illness coincided with our reaching the north ridge, by which point the hardest climbing was over. Ian's tribulations were far from over, however; soon after, a portaledge collapsed in the dead of night and spat him out into the void, where he dangled in a daze, desperately clutching his sleeping bag awaiting rescue.

By now all of our fingernails had delaminated, Tom's feet had been mangled and a multitude of small cuts and grazes had claimed most of the skin on our hands. Morale was dwindling fast and Tom's sense of urgency, coupled with our limited food supply, was our main encouragement to keep up the pace. It was with relief then, when on our ninth day the angle of the route became gentle enough to accommodate snow and ice, and by mid-afternoon there was no more mountain. I struggled to believe it. After over 40 pitches we had successfully free climbed the Mirror Route. As far as we know this was the route's second ever free ascent after Alex Lowe and Lynn Hill; standing victorious on the summit of Pik 4810, we felt close to those rock gods.

Our euphoria waned after a couple of abseils, when it became clear that our battle wasn't over. The cliff clung to our ropes and its flakes chewed falling ends. Somehow we felt that the mountain was making a point: although it occasionally suffered amateurs, it did not do so lightly. After 23 hours of continuous descent and under a full moon, we surfaced at base camp at 5:30 am.

Now the only climbers in the valley and staying with Zair, a local Kyrgyz shepherd, after a few days' rest we set about on a new route of our own. Over 3 days we fixed a few lengths of rope up the soaring, unclimbed north-facing arête of Kotina, taking the cleanest line through some of the wildest and steepest features on the mountain. We tackled the rest of the line alpine-style in another 3 days. Fantastic three-star climbing on splitter granite cracks, corners and detached roofs led us through consistently steep territory, sustained at F6b/+, to the very top of the mountain without a single pitch of easy ground. By the time we were ushered off the summit by a heavy snowstorm that heralded the end of the climbing season in the valley, we had established a 26-pitch, 1050m new line at F7a. We named it 'Dreaming Spires' after the terminal feature, a hugely exposed pillar of golden granite with a knife-edge ridge connecting it to the main massif. Huddling in a cave halfway down the route in the snow, we reflected on what could be achieved even by self-proclaimed punters with enough ambition, determination and suffering.

Our trip would never have been so successful without the help of friends old and new, and the generosity and welcome of the Kyrgyz people never ceased to amaze us. Last but not least, we give our heartfelt thanks to the Irvine Fund, without whom we could never have dreamed of such an adventure.

jacobjacob
7 Dec, 2012
Awesome!
Reach>Talent
7 Dec, 2012
Great article and sounds like loads of fun. However someone needs to make a comment about student groups overcrowding honeypot crags and they were fixing ropes. ;-)
biscuit
7 Dec, 2012
Amazing. I love the idea of 3 cash strapped students who'd never done it before going for a goal like that - and doing it. Well done guys. Memories for a lifetime from that trip.
royal
7 Dec, 2012
Awesome adventure!
Mike Lewis
7 Dec, 2012
This is unbelievably impressive.
More Comments
Add Comment