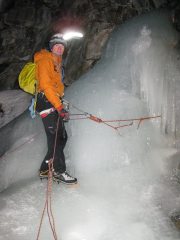 Dave Graham is highly regarded as one of the top rock climbers to have come out of the US in the last ten years. Born in 1981 and originating from Maine, New England he started climbing in 1997 at the age of 16. Within a year he had climbed the US grade of 5.14a (F8b+) and it was quite obvious that his lean and gangly frame was well suited to the sport of climbing.

Early days were spent developing the crags of Rumney, New Hampshire with his friends Joe Kinder and Luke Parady. First ascents of China Beach F8c, Jaws F8c+, Livin' Astro F8c+ and The Fly F9a were all established by Graham and all within three years of taking up the sport.

Since 2000 Dave has lived life as a professional rock climber and has travelled extensively throughout the US and Europe. His self-proclaimed “gypsy” lifestyle has enabled him to make his mark in sport climbing and bouldering across the world.

However, it is bouldering that Graham professes to enjoy the most and here his list of first ascents and repeats is even more impressive. The first ascent of Spectre V13 in 2001, a repeat of Dreamtime Font 8B+ in 2002, New Base Line Font 8B+ in 2003 and then first ascents of From Dirt Grows The Flowers and The Story Of Two Worlds (both Font 8C) in 2005- the latter which Dave heralded as the new benchmark for Font 8C. More recently he established the amazing looking prow of The Island, Font 8C in Fontainebleau. Interestingly he puts his success down, not to brutal strength but to ice hockey. Apparently, “it's all in the hips!”

With such a list of impressive ascents and an obvious and unrelenting enthusiasm for climbing and life in general, I was keen to a gain further insight into the mind of this 26 year-old man from Maine.

Filmmaker Dave Gill of SteepMedia and myself caught up with Dave for an interview before his stunningly fresh lecture in Ambleside, organised by the town's specialist retailer, Lakes Climber and event organiser Heason Events.

'Call it what you want' a new film from SteepMedia

Dave Gill of SteepMedia
'Call it what you want' follows Kendal climber, George Ullrich, as he tests himself over a year, at home in the UK and further afield.

We see him climb Lake District testpieces, skip the bolts on The Bachar-Yerian, nail Californian first ascents and solo above the ocean in Mallorca.

As problematic situations arise, the film asks other notable climbers how they deal with the issues and ideas that drive the sport.

Call it what you want asks the question, "what is truly important in rock climbing?"

We've just uploaded the trailer which can be seen at www.steepmedia.blogspot.com and this film will be premiering at the Kendal Mountain Festival.

Liam Copley
17 Oct, 2008
"i just dont wana get fu**ed up" haha
Ian Paterson
17 Oct, 2008
"Y'know climb an 8c+ boulder or a 9b route, some easy sh*t like that" Hehe, i love some of the stuff he says.
jazzyjackson
17 Oct, 2008
always good to hear D Graham on climbing. Excellent insights. His interview on Udini when he talks of wizardry is one of the best climber interviews I have watched. So many climbers just cant harness what its all about verbally but Graham has it.http://www.udini.de/index.php?option=com_gallery2&Itemid=117&g2_itemId=16849 excellent
TRNovice
17 Oct, 2008
Who the hell picked that "music"???
Alex Thompson
17 Oct, 2008
What a wicked interview! :-)
More Comments
Add Comment