At the beginning of April, Hazel Findlay became the first British woman to climb an 8c sport route with an ascent of Fish Eye at Oliana in Catalunya (UKC News Report).

Hazel is no stranger to pushing the standard of British women's climbing, having also been the first woman to climb E9 with an ascent of Once Upon a Time in the South-West, Dave Birkett's route at Dyer's Lookout in North Devon (UKC News Report). Hazel then went on to climb another E9 with Chicama on Anglesey (UKC News Report).

In addition to this, Hazel cemented her place at the forefront of British women's climbing by becoming the first British woman to free climb the world famous granite big wall of El Capitan with an ascent of Golden Gate, 5.13a in 2011 (UKC News Report). Since then she has freed El Cap twice more with ascents of Pre-Muir Wall, 5.13c/d, (UKC News Report) and Freerider, 5.13a, (UKC News Report) in 2012 and 2013 respectively. Her ascent of Pre-Muir Wall is up there with the hardest big wall efforts of any British climbers.

UKClimbing.com interviewed Hazel about climbing Fish Eye, about her future plans and about breaking grade barriers.

Tell us about Fish Eye, its pretty long - are there any real cruxes or is it pretty pumpy all the way? Why did you choose it?

Hazel: I chose it because my friend Walker was trying it and he said it was really cool, which it is.

It's 50 metres long, around 150 moves and really steep. The angle eases at the top but the holds get a lot smaller. There are three district cruxes but they aren't that hard stood alone. I did pretty much all the moves first try when I initially bolt-to-bolted it, but I came down feeling destroyed, thinking I couldn't possibly do it this trip. I told my friend Walker that there was only a 5% chance of me doing it in the two weeks I had left and that really to do this sort of route you have to train down the wall and not go to Patagonia for the winter.

So you were in Patagonia for the winter, how did that go? It doesn't seem to have affected your sport climbing much?

Hazel: Patagonia was fun but it wasn't a successful trip. I didn't really do anything at all. Mostly because of weather, poor route choices and bad luck. I mostly walked around with a heavy ruck sack on.

The saving grace was the bouldering out there, which is probably the reason why I wasn't too bad at sport climbing when I got back.

Having only climbed one 8b+ before, do you think Fish Eye suited you?

So how long did Kalea Borroka and Fish Eye take you to redpoint?

Hazel: I think Kalea Borroka was 5 days and Fish Eye took 7 days but I probably could have done Kalea Borroka quicker if it wasn't such a minging route after rain.

Lucy Creamer climbed Kalea Borroka when she became the first British woman to climb 8b+, was this the reason you chose it?

Hazel: No. It would have been better to do a different one! But I was in Siurana at the time and it seemed like an obvious choice - a lot of the other harder routes there are pretty bouldery.

So bouldery routes don't suit you, what do you feel are your strengths and weaknesses?

Hazel: Strengths are: flexibility, reading rock, being able to climb on different types of rock with different styles.

Weaknesses are: strength, power, long term projecting/patience, training in any shape or form.

So did the potential to be the first British woman to climb 8c make you more motivated to persevere to get the route done?

Hazel: I would have been motivated enough anyway, but it sort of felt like an extra little bonus, like someone giving you two pats on the back instead of one.

Do you feel any competition with other top British climbers, female or male?

Hazel: Not really no. Although it's always good when you do something a bit better than James 'Caff' McHaffie (miracles happen). I think there are a lot of really good female climbers in the UK at the moment and although I might try to compare myself to them I don't feel any competition because we all have different strengths and different goals.

Having been the first British woman to climb E9, free El Cap and now 8c, it seems that breaking through these grade barriers doesn't intimidate you?

Hazel: I'm not sure why it would intimidate someone. Being British shouldn't be that much of a handicap; other women from other countries are doing these things so why not us. It's also just a case of trying the next hardest thing. It's pretty logical.

What are you hoping to do with your 8c fitness?

Hazel: I'm going to Yosemite soon, so not much.

It's kind if a shame that it will get wasted on Yosemite since I won't need that sort of fitness there. In fact I was supposed to be in spain doing mileage for Freerider in a day, but then I got sucked into a project. So who knows how I will fair with a 30 pitch day!

Apart from Freerider in a day what have you got planned for the states?

Hazel: Probably hang around Camp 4 laughing at Caff and Dan with their snorkels out [The route that Caff and Dan want to do could be wet so Hazel suggested Caff may have to wear a snorkel for the crux pitch].

Maybe play around on FiFi buttress with my friend 'big fall James'.

So do you have particular times of year you climb sport and trad or do you just let where you are dictate what you climb?

Hazel: I mostly sport climb at the start of the year. It seems to make sense because it's cold in a lot of places and it means you start the year off on the right foot. This year, it was delayed a little bit by a trip to Patagonia, which did little for my rock climbing fitness. That said I bouldered in Patagonia more than I have ever, so maybe I kept some strength from that.

As a professional climber, you climb virtually everyday, is it important to mix it up to stay motivated?

Hazel: Switching styles is really important. When I was in Oliana there were climbers there who only sport climbed and seeing how they went from project to project made me realise how important it is for me to go trad climbing, climb in different places and mix it up all the time. I couldn't just red point sport climb for the whole year.

You aren't into training, so is it just by climbing a lot that you keep on top form?

Hazel: Well it's a matter of opinion as to whether I'm on 'top form' or not. I'm sure I could be stronger and fitter if I trained, but that's not really what I want to do. I'm lucky enough to be able to travel all year and climb full time, so why would I choose to spend that time on plastic. Maybe one day I'll want to do something a lot harder and maybe I'll train, or maybe I'll want to spend more time in the UK, but at the moment I feel like I should capitalise on my ability to rock climb in really amazing places.

Do you think there is anything that holds British men and women's climbing back?

Hazel: I'm not really sure about this. I would say that it's because we have less of a culture of training than in Europe, but you only have to go down the Climbing Works or TCA to see that this is changing. We have world class boulderers and I'm not too bad at trad. Emma, Mina and Katy are pretty good sport climbers too, and I'm sure we haven't seen half of what they can do. The men aren't too shabby either.

So I think we'll just have to wait and see, we might not be that far behind the Euro wads soon.

So are there any women out there that inspire you?

Hazel: My friends Katy Whittaker and Madeleine Cope inspire me a lot. Maddy tries harder than most and Katy has a lot of tricks up her sleeve. Lynn Hill is probably up there as well. 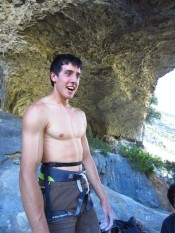