The shell-shocked look on Chris Craggs’s face was telling, as he slumped with relief on the first belay: Despite being fully bolted as a multi-pitch sport route, Le Trog is an outing best suited to those with a well-developed taste for adventure.

It started with a UKC forums thread a few years ago. “Abseil Puzzle” described a situation I found myself in while exploring crags close to our home in Ariège. I’d been looking to abseil down through a cave system I’d eyed from the road but I’d failed to find the high cave entrance in the steep, wooded cliff and ended up on a rock bridge on the stretch of my ab rope. I now was blessed with a great view into the magnificent open cavern but cursed with no clear way of continuing the descent. The ground below was home to the cave’s ample mouth, from which it was clear that a route could be made entirely inside the cave, naturally lit by the huge ‘window’ in which I was marooned, and finishing at the ‘skylight’ opening I’d just failed to find. There was no climbable way off the bridge and no possible anchor to use for another abseil.

The puzzle itself was solved by lowering a rucksack full of rubble and using it to counterbalance an abseil descent from the other side of the rock bridge, but by far the most fascinating part of the whole endeavour was the potential for a route all the way up through the cave itself, a passage of some 100m of distinctly climbable-looking rock. Several days of labour later Le Trog was born.

A headtorch isn't strictly necessary but on a cloudy day, when there’s less ambient light, the 35m first pitch could easily be a grade or two harder without one. In any case it will probably feel harder than its 6a grade might suggest, as it’s witnessed the evolution of spiders for many centuries and, being perma-dry and therefore unweathered, there’s a persistent looseness that no amount of clearing will ever cure. Belayers should be aware and not stand directly underneath.

Still not put off yet? Good, because after that it’s plenty bright enough and the rock on the whole is quite clean and solid. Indeed it may even feel almost normal if you can ignore the fact that you’re deep inside a huge hole in the hillside, complete with bats, echoes and the slightly disturbing prospect of a multi-pitch abseil into what looks from above to be pitch blackness.

The second pitch is a little conditions-dependent. The 6b+ crux has nice, technical moves up a clean, almost vertical rib, but to get there you’ll need to round a bulge above the belay and teeter up an open groove, which can be wet from seepage after a wet spell and which feels slippery even when it’s dry. And not wanting to risk bolt corrosion by fixing gear in rock that seeps, the gaps between the bolts could feel slightly further than a nervous leader may prefer. Maybe get your mate to lead this pitch (on second thoughts get your mate to lead all the pitches!)

The top pitch is the crux; in fact the top move is the crux, after meriting 6c or so to the last bolt. You’ll need to make an awkward traverse to get to the steep and excellent layback up a curiously haunting hollow, after which a good rest on jugs gives plenty of time to contemplate how best to use the holds you can’t yet see over the final bulge. Once in the top hanging corner success is all but guaranteed, despite a nervous-feeling reach leftwards to the lower-off. Clip the chain and feel joyous that you've conquered – or perhaps simply survived – the obscure.

Le Trog is climbable all year round. The underground temperature here is steady at around 12ºC and, while the cave itself is open and will be affected by outside temperatures, it should feel relatively cool in summer and relatively warm in winter. The only genuinely limiting factor is seepage; most times there should be little or no damp to contend with but if the weather has been particularly wet over the previous month or so it will take quite a while for the seepage to dry up. A bright day will help find your way at the start but isn't essential, especially with a headtorch; indeed the adventure that is Le Trog can be ideal for when a rainy day arrives after a settled spell.

A 70m single rope will suffice. The second and third pitches (30m and 25m respectively) should be no problem with a 60m rope but the first pitch could be tricky. If you’re still yearning for more adventure it has proved possible with 60m to swing across the slab into a sandy gully on the left, but a longer rope or a second abseil rope left on the first belay would be a much better idea. Each anchor is equipped with a twin-bolt anchor, chain and ring. The top pitch is around 6c with one point of aid.

To find Le Trog park on the D123 back road (rive droit) from Ussat-les-bains to Tarascon by a junction (grid reference 42.825992, 1.619770) with the D723 (the ‘Route des Thermes’ one-way road down from Ussat village – which isn’t the same as Ussat-les-bains village!) Walk up towards Ussat for about 130m to a small stone building on the right. A few metres before this a path leads from a roadside cutaway, up through the trees (don’t turn off left) into the arched entrance of a large and impressive cavern. Once your eyes have adjusted walk slightly leftwards up the scree, past a huge poorly-lit slab, to the base of a big corner.

Plentiful bolts mark the way, as with any sport route, but don’t blame me if you still remember this one 30 years later!

"Within 15 minutes of our Chez Arran farmhouse are over 15 fantastic limestone, granite and gneiss climbing sites ranging from single pitch gems to 350m big wall extravaganzas. Climbs start at just 2a and go right through to 8c+/9a (in the 35m+ overhanging Grotte de Sabart). There is great granite bouldering too at Laramade and at Orlu. You can climb all year round here, with some of the best conditions found in midwinter on the many South-facing sheltered limestone crags. The sun is so warm we often find ourselves climbing and belaying in t-shirts." 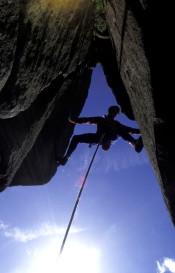 Climbing and Dealing with Diabetes

The Highs and Lows of COP26 - Mountains and Beyond

cyberpunk
2 Sep, 2015
Cool. Does it stay dry in the rain or does the cave seep?
Jack Geldard
2 Sep, 2015
John says in the article: "Le Trog is climbable all year round. The underground temperature here is steady at around 12ºC and, while the cave itself is open and will be affected by outside temperatures, it should feel relatively cool in summer and relatively warm in winter. The only genuinely limiting factor is seepage; most times there should be little or no damp to contend with but if the weather has been particularly wet over the previous month or so it will take quite a while for the seepage to dry up. A bright day will help find your way at the start but isn't essential, especially with a headtorch; indeed the adventure that is Le Trog can be ideal for when a rainy day arrives after a settled spell." Cheers, Jack
john arran
2 Sep, 2015
Never any direct rain and mostly no seepage either but easier parts of the 2nd and 3rd pitches will seep after any prolonged bad weather - most likely in winter or spring when there's more water in the ground already, then they will take quite a while to dry. edit: thanks Jack!
Chris Craggs
2 Sep, 2015
I remember it well - seared into my brain. When John invited me to partake in the 1st Ascent (as belay bunny - and I refused to even consider the top pitch) he failed to point out that although he had bolted the line he hadn't yet cleaned it. As a hardened veteran of many a Venuzwalain epic he was fine, as a pussycat used to clean grit and bolted Kalimnian limestone I found the whole thing a bit fraught! Chris
john arran
2 Sep, 2015
You'll be pleased to know it cleaned up well Chris ... but by the time I went back to do it again a few months later it was back to its 'characterful' self!
More Comments
Add Comment
Loading Notifications...
Facebook Twitter Copy Email LinkedIn Pinterest