One Sunny March Weekend in Sheffield

The Climbing Works is packed for the Semi-finals on this sunny march Sunday. This is my first competition as a spectator, and I'm not entirely sure what to expect.

A buzzer sounds and two lone climbers appear on the first men's and women's problems. The music kicks in as the DJ announces "and first on the men's problem we have Sam Whittaker, proud owner of the biggest biceps in climbing..." Well, I'll have to take your word for it, I think to myself, but who measured?!

Competitors had only five minutes on each bloc, edging across to the next problem in conveyor belt fashion until the whole competition wall was filled and you didn't know where to look.

Everyone was getting shut down, testament to the fiendishness of the rout setting from the Works' team. However, with each step in the rotation of climbers, the skill and intensity ratcheted up another notch, as did the shouts of encouragement from spectators and climbers alike.

What really amazed me about the competition was its intimacy. Rows of benches stand amphitheatre-like for spectators, but no one seems to be more than a few meters away from the action. Combine this with one of the quirks of competitive climbing – that participants have to face away from the wall so as not to gain an advantage – and you're sitting, face to face, just feet from some of the best climbers in the world.

CWIF, now in its 6th year, is a truly international contest. But although the competition is fierce, and understandably so considering the whopping £750 awaiting the winner, the atmosphere is incredibly friendly and welcoming. With the DJ cracking jokes and playing a great set, it certainly has the feel of a festival.

Back to the action and I'm suddenly transfixed by the spectacle of climbers, so comfortable hanging upside-down by their toes, that they seize the opportunity to casually blow chalk from their fingers. But before I know what's hit me they begin sending problems left right and centre – literally. Floppy-haired Frenchman Guillame Glairon-Mondet (or Gi Gi as the announcer insisted on calling him) started by flashing men's problem 1 and dispatched 2 and 4 in only two attempts to win the Semis. There were also exceptional performances from triple British bouldering champion Ned Feehally (Nederland's 2nd) and Chris Webb Parsons (Australia 3rd), who did well to maintain his composure as the DJ tried to make him feel at home by playing 'Tie me Kangaroo down'.

If possible, the women's competition seemed even more intense. Alex Puccio (USA), fresh off her sixth win in seven years at the American Bouldering Series, flashed problems one and two with ease. The standard of climbing was incredible, with Mina Leslie-Wujastyk (3rd), Leah Crane (4th) and Clementine Kaiser (5th) all on-sighting the first problem. In the end however, the effortless style of Shauna Coxey shone through. After coming third in the ABS Nationals the previous month she came back at CWIF to beat Alex into first place – the only competitor to top-out on all four problems. Later she went on to win overall and take a proud seat on the central space-hopper of a bouncing podium, to the delight of the home crowd.

Competition over, I got my priorities in order and headed outside into the warm sunshine for a burger at the free BBQ (well, it would be rude not to wouldn't it!). Then, pleasantly full after the exertions of the competition, I caught up with Sam Whittaker – grit stone master and Co-Managing Director of the Works. "It's been a great competition" he said, "it attracts people from all around the world and seems to be going from strength to strength, there's a great range of varied problems, so you really need to be good at everything to do well".

The CWIF isn't all there is to see in Sheffield on this gloriously sunny march weekend. For the armchair adventurer it's all go from the 9th to the 11th as Sheffield also plays host to the ShAFF adventure film festival. "It's defiantly the way forward" says Sam, "aiming to make it a really good climbing weekend. I think the CWIF and ShAFF really complement each other."

Now in its 7th year, ShAFF had some amazing films on offer, not to mention inspiring lectures, live music and – getting my priorities right again – the oh-so-refreshing-when-your-all-filmed-out ShAFF Ale. Competing this weekend with the glorious sunshine, the almost 44% rise in ticket sales this year certainly bares testament to the increasing draw and popularity of this event.

The Climbing films on offer this year were pretty exceptional. From the gripping 'Race for the Nose', to the awe-inspiring 'Towers of the Ennedi', ShAFF is a kind of cinematic index of the most beautiful locations, inspiring stories and craziest characters in the world.
Lucy Creamer, seven times British Champion and film Judge at ShAFF, said: "Both are great events. With over 300 entrants at CWIF, it really is world standard. And ShAFF had some very high quality films this year, which made the Judging pretty tough".
'Life on Hold' which premiered at ShAFF on Saturday, particularly highlighted the way the events complement each other. Produced by Sheffield based Outcrop Films, it featured a seemingly endless supply of heart-in-mouth highball bouldering from around the Peak District.

Not only could I watch it and every few minutes think 'I've been there', the very next day I could trot along to CWIF and see those very same climbers compete. Moreover, if I was so inclined, I thought to myself, and if I wasn't so acclimatised to the world of 'armchair adventuring', I could catch a bus out to the Peaks and attempt those very same routs (attempt being the operative word).

But perhaps my favourite film this year, if only for the way in which the audience around me, and I myself, began emitting fits of laughter, often in the same breath as palpable groans, was 'Reel Rock: Sketchy Andy'. The film chronicles the death-defying adventures of the eponymous Andy Lewis, slack-line master and all-round lunatic. Increasingly these days, scenes like these are played out in small, often pixelated, YouTube windows. Here however, on a big screen, surrounded by likeminded people, soaking up the visual kaleidoscope of films which, this year, were all screened in the crystal clarity of HD/Blu-ray, the effect seems somehow amplified.

At ShAFF the element of surprise is key. I don't mean that people jump out at you from around corners or anything like that – although it does abound with charity collectors – but that the film bundles are so incredibly mixed.
Allow me to illustrate. I must admit that I let out a little groan as the first film of 'Adventure Medley 1' was announced – 'Wild Swim London'– it was every bit as boring as it sounded. Wrinkly oldies swimming in a pool – I'm not impressed. Having said this however, it did score 6/10 in the people's choice tally, so apparently others were – but humour me. More swimming: this time in a big murky green pond, trees dipping their bows towards the water, like me perhaps, losing the will to live.

Even as the opening of the last film filled the big screen in front of me and a young couple announced that they were going to take a year long trip from Seattle to Alaska, I must admit, I wasn't expecting much. But by the end, with a broad grin on my face, and shaking my head as though to rouse myself from a wonderful dream, I left the cinema with that warm fuzzy feeling that all great films impart.

To cut a long but persistently endearing story short, after a precarious night paddling small dingy along the icy Alaskan coastline, the couple decide to have a baby and end their life changing adventure as a family. This film won the spirit of adventure award at ShAFF and nothing could be more deserving.

And so I decided that overall, I really do quite like surprises. One of the lessons I learnt with ShAFF is that, like the adventurers in its movies, you have to be willing to explore, and maybe take a few risks like enduring 'Wild Swim London' to really experience all it has to offer.

Though I must admit that the films were the real draw for me, ShAFF had much more than this on offer. As climbers, there comes a point where we begin to watch films and read magazines; we dip our toes into the world of its heroes to try and discover what it's all about. But at ShAFF and CWIF I find myself fully submerged, talking to internationally renowned climbers like Lucy Creamer, getting tips on some of the most arrestingly beautiful climbs in the world from Steve McClure and seeing one of the characters from my books come to life as Simon Yeats recalled his latest adventures in Tierra Del Fuego. And this is barley scratching the surface; Kit sale, orienteering which saw over 100 participants, free sports massage, the ever popular quizzical quizzing which accompanied the Arc'Teryx Adventure Shot Photo competition. I could go on.

And if you just can't endure all this revelry without pangs of conscience kicking in for those less fortunate, rest easy. The ShAFF charity auction raised a commendable £1,000 for community action Nepal whilst CWIF raised over £3,000 for Macmillan Cancer Support and Edale Mountain Rescue.

The only down side to all this was of course the great British weather. Hot and sunny all weekend whilst I sit indoors, understandably incredulous. But look on the bright side. This is Sheffield after all and it will most likely be damp and drizzly next year! Roll on ShAFF and CWIF 2013! 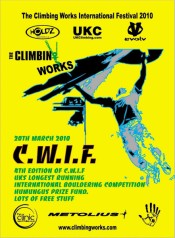 What makes the CWIF special?

The Rise of the UK Paraclimbing Community

MattH
22 Mar, 2012
Thanks for the review Lewis. Keen to hear feedback from anybody who attended...
mloskot
23 Mar, 2012
Me and a few of my friends, we attended the CWIF comp only. It was simply amazing experience. It was my first time at Climbing Works and I loved it. World class boulders set by world class setters. Extremely friendly atmosphere. Great spirit of competition. Chill evening at the pub. Kudos to Matt 'Birdo' and his team who did awesome job at the BBQ on Sunday! I'd call it indoor Melloblocco!
Bellie
23 Mar, 2012
My second year and another enjoyable experience. Having watched the mountain and climbing films, I was left thinking that the others would be just as exciting to see, so I might have to park myself at the Showroom for a little longer next year... and fit a visit to the works in too. Really glad to hear it was such a success, and ticket sales meant moving to larger screens in some instances. Fav film... Cold
Add Comment
Loading Notifications...
Facebook Twitter Copy Email LinkedIn Pinterest