Soul and Sea on the Eiger

Freja Shannon writes about big runouts, bad weather, and perseverance, when taking on the Eiger.

I have fallen off mid-clip on sport routes, rationalised trad routes with no-fall zones, shivered under icefalls, been benighted on Alpine summits, huddled in surprise snowstorms, climbed into the unknown in Patagonia and afar, abseiled down the wrong mountain and chased pitons up the wrong corners. In all of these experiences, I had the demon of fear on my shoulder, but my experience on the Geneva Pillar on the Eiger was one of the scariest, most challenging, and most soul-search-provoking so far.

The Geneva Pillar is a striking piece of rock found on the west flank of the infamous Eiger north face. It's pillar is approximately 320 metres high, with alpine multi-pitch rock routes ranging from 7a to 8b. They are partly bolted, partly traditional, and for the most part exist on solid rock. The pillar has seen many ascents from elite climbers, and I wanted to test myself on its most amenable route, Deep Blue Sea (7b+), an ultra classic of the face.

I had first heard of this route a few years ago when a female climber I really looked up to had climbed it. To me, with impressive catch phrases such as 'Eiger', 'north face', and 'west flank', it seemed like the most enchanting adventure. It felt so impossible and so far away that I barely even dared consider climbing this mythical almost untouchable route. I had spent my fair share of time watching climbing movies about hard multi-pitch climbing and really wanted to try it out.

The years passed by and somewhere along the way my dream of acquiring the skills to touch a route like that became reality. I knew I physically could; having spent a great deal of time on exposed walls and alpine terrain since. I felt confident and managed to convince my boyfriend to join me on this low-stress adventure on his low-stress holiday from full-time work (note the irony).

Several route descriptions and personal accounts made the route seem tough and terrifying with notable run-outs and loose rock. Perhaps pure psyche or lunacy allowed me to push the alarming pieces of information away as nothing of the sort registered in my mind. I had thought of this line for so long and nothing was going to get in the way. A weather window popped up and we soon stood in an explosion of gear and sleeping bags in an overpriced Swiss car park.

It felt odd sharing the lift station half way up one of the world's most historic mountains with a sea of tourists. What a contrast, I thought, though well accustomed to the disparity after a summer in the Alps.

We set off on our approach, scrambling up part of the west flank which Ueli Steck famously declared his 'training ground'. It was an extraordinary feeling knowing that its summit was looming above us only a mere few hundred metres away. I couldn't help but think of its true north face to the left of us having claimed so many lives. Despite it being my second time on the Eiger I felt remarkably exposed, somehow climbing it with my bare bands and thin rubber shoes made me feel incredibly bare.

Nonetheless, we enjoyed our hike and found ourselves a little bivouac cave to set up camp in for the night. We scoured the topo and checked out the first abseil points for the morning, drank the tastiest glacial river water, and delved into our new-found love for couscous and Mexican soup mix dinner. The next morning we were at the base of the route right on schedule and did our usual rock paper scissors of who gets the first lead. Mine!

I had read the first pitch was hairy and set off a little bit nervous, but soon arrived at the belay with relief, feeling fresh and confident. Sebastian flew up the next easier pitch, which was meant to be loose and scary but went down with ease.

'The first two pitches with bad reputations have felt totally fine, maybe it's not that bad!'

We swung leads for the couple of pitches with pure joy, hauling as we went and smiling to ourselves on each belay. I was finally on the Geneva Pillar.

I registered the run outs on the way up but didn't consider them too much. The rising sun and the awakening Grindelwald below us overpowered any sense of fear. A soft breeze brought with it the sound of the cowbells and occasional whoop of an enthusiastic hiker. However in control I felt, I never quite dared to look too far to my left, knowing that there was a kilometre wide and kilometre tall north face beside me.

This feeling of lightness lasted until my next lead. Within my first ten metres the wind picked up. The holds seemed to get smaller, and the space between the bolts suddenly grew to be treacherous. My fingers were icicles. Unchalked, it was hard to see where to go in a maze of could-be holds. Not a bolt in sight, no gear to place, just dear hope for there to be something up there to keep me on the wall. Suddenly everything was wet. Why is it wet? Is it raining? No, just really windy. Drips were coming from above. In fact most of the route was wet. How am I supposed to climb wet E5? What about the crux? My mind was going at a hundred miles an hour and tears were burning.

'This wasn't how it was meant to be. I'm supposed to be able to do this. I've been through worse', said my goal driven alter-ego.

Stubbornly, I kept climbing. I didn't want to let myself down. I didn't want to feel defeated, nor did I want to let the female climbing community down. Was I to dishonour the hard work put in by the heroic female alpinists ahead of me simply because I wasn't good enough? No way. In my ramble of thoughts the light breeze had turned into a strong wind, and was bringing my short panicked breaths with it. Clouds were building around us and I just wanted to go down, go home, forget I even tried.

We continued on, naively hoping the top of the pillar would be drier. We barely spoke at the belays, not wanting to admit the grimness of our outing, but also far too occupied layering down jackets, defrosting fingers and zipping every pocket with potential heat-escape closed.

Robotically, I set off on my sixth sopping wet pitch with what seemed in my imagination to be the traverse of the gods on the 1938 route. A quarter of the way up I burst into tears while scratching around for something dry to hold onto. I stared down to the bolt beneath my feet with wild-eyed panic. I was tired, cold, scared, and defeated high up on a wet, windy, and wild pillar at 3000m. What was I even thinking?

Knowing my partner was a tenfold stronger climber than me we swapped the lead, and it wasn't long before we stood beneath the last crux pitch. We finally agreed to bail amidst the drops of water coming down. Escaping five pitches ago would have been equally warranted, but the free climbing warriors within us kept us going.

At the time I was disappointed. I was upset with myself for even being upset, and for asking my partner to take over the lead. I had been so excited to climb the route, to experience a big proper alpine multi pitch, to redpoint cruxes, maybe even tape some fingers and brush some holds high up on a wall just like in the epic climbing films. My experience and expectation was everything but that.

Humbled but accepting, the negative thoughts and vicious ego lasted only a couple of days before a weather window popped up again. I had to go back. A second attempt on something I had felt so hopeless on felt more terrifying than the climbing itself. Facing the potential of total defeat all over again, and willing to risk denting our self-esteem, we set off. Sort gear in the car park, get the lift halfway up, swim through the tourist sea, up the hill, into the bivouac cave, down the abseils. This time no wind, no wet, no cold. The light breeze followed us up through dry holds, run outs that I swear had shrunk, and beautiful limestone climbing in a spectacular setting. I even dared glance to the left of me. First crux free, boom we're on a roll!

After a close onsight attempt on the second crux my arms were drained. Amidst being lowered down, brushing holds, checking beta, and discussing moves, I realised exactly what I enjoyed the most – this. The process of the entire route - with both attempts - was more than I could ever ask for.

I topped out on the last pitch with butterflies in my tummy, on top of the Geneva Pillar which had become such an obsession of mine. Smiling, I leaned back on a rock behind me and put my partner on belay. Relieved, delighted, and grateful for having dared to go back.

I learned so much from this experience, about alpine 'big-walling', managing expectations, and dealing with perceived defeat. What sticks out the most is realising that something which feels hundreds of miles away can become a reality one day. That you're so much more capable than you think you are. That it's always worth trying, and always worth going back again, and again, and again if you have to. That you can find yourself feeling so alive 300 metres up a rock wall in the grimmest conditions. It's actually true, however cheesy it sounds, that its not about the goal but the experience it brings! 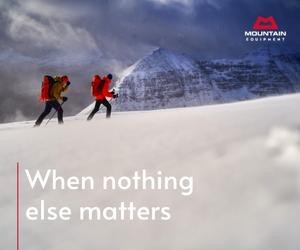 Family Days on Iron Ways: Taking on a Via Ferrata with kids

Me Again - Climbing with Arthritis

Great write up. Thank you for sharing.

Got me psyched whilst I wallow in self pity with a shoulder injury.

An excellent read ! Forwarded to two young'uns in the family just starting out with their climbing, hoping it'll keep their enthusiasm running high !

Excellent article, more of this please!