UKC Regulars Full Stottie and NWClimber have teamed up to make a start on a new climbing dictionary, inspired by the Washington Post's Style Invitational and "I'm sorry I haven't a clue" Uxbridge British Dictionary.

UKC readers are invited to release their creativity and contribute their additions to the growing lexicon needed by the thousands of people taking up this fine healthy pursuit.

Rules: Either offer a new climbing-related definition of an existing word, or a new definition of a climbing term. You can change or add or take away a letter.

Absheiling: when stomach muscles are greeted by a Teutonic friend

Aiguille: just the one Guille

Alpine: wishing you were in Chamonix

Ambivilence: not caring where one sleeps outside

Belaytedly: failing to notice one's partner has fallen off

Buoux: (Eng pronunciation) a sudden fright for a child

Camalot: excessive use of friends

Campuss Board: getting tired of placing friend 0.5 into ex-boyfriend's cat

Campussing: kerb crawling near a university

Chim-chimenee chim-chimenee: nervousness when confronted with a very wide crack

Dropsy: disease suffered by some spotters

Dynoing: passing away with great awareness

Enchainement: getting tied down intentionally

Gullyble: easily persuaded into ascending or descending a slippery fissure

Handjam: spreading preserve without a knife

Kalymity: a disaster in Greece - e.g. missing a ferry

Kermmitting move: action requiring the courage of a muppet

Ledger: someone who occupies a stance for too long

Mantelshelf: ledge to rest your nick-nacks on

Mistle thrutch: whistling tunefully while rocketing up a chimney

Moelwyns: race result in Tales of the Riverbank

Mono-doigt: a finger placement before stereo

Oedibus: catching the same bus as your Mum

Overhang: an execution that should have taken less time

Patagoniad: (gentle) check made by climber (male) after long fall

Pembroke: Pem waiting to be fixed

Prima Faecies: first climber to crap themselves on a route

Pro-tection: getting paid for placing nuts

Retrobolting: running away whilst wearing flares

Rockover: staying the night under a friend's boulder

Rock over (US): Elvis has left the building

Sarchasm: large gap between belayer's comments and a leader who doesn't get it

Side pull: asking the person next to you at the wall for a date

Sit-start: sequence of moves after reaching the crag from the car

Slowper: a hand gradually sliding off a rounded hold

Snowdonia: end of winter in your locality

Stannington Ruffs: inhabitants of a no-go area near Sheffield

Testiculating: waving arms wildly at the bottom of the crag and talking bollocks

Undercling: not holding on long enough

Undercut: not yet drunk

Understanding: belaying from the bottom of a cliff

Whether forecast: discussion on a climber's likelihood of success

Are You a Complete and Utter Bumbly? Take the Test! 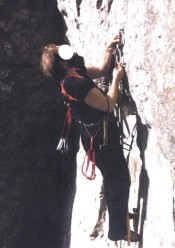 Proud to be a Bumbly