Will Hunt writes about discovering new problems in Colsterdale, which he has documented on his website Unknown Stones - a free resource offering information on little-known venues in Yorkshire.

The Donkey: I hope you’re not going to go and grease up the holds on Lay-By Arete. I want to try that today and it gets well greasy when there’s loads of people on it.
The Scrittler: Nah, we’re trying something else.
The Donkey: What? Sulky Little Boys? Haven’t you done that yet?
The Scrittler (evasively): Well, we’re going to a different crag actually…
The Donkey: Ah, Birk Gill is it?
The Scrittler: …
The Donkey: Well there’s only three crags in this valley! Where else can you be going?

Three crags in the valley. So it was always thought. Slipstones, Brown Beck, and Birk Gill. Surely that is enough grit for one small valley? Of course not. To those who seek, the appetite for grit is insatiable.

The recent flurry of development at this northern frontier of Yorkshire deserves some mention of its own, though I am hardly the person to do it, so please forgive the factual inaccuracies. Kick off was commenced by the brothers Henderson and friends when they fired the first salvo at the fortification of gritstone now known as Twin Towers. Here they climbed a small selection of fine highballs within the E1 to E3 grade bracket – with the most striking of these surely being Anniversary Arete (E3): a perfectly formed feature comprised of the finest Slipstones grit.

Things went quiet. Lichen returned. The Scrittlers were all away at Yeadon or Sigsworth or Gate House. Their eyes had not yet turned to these far northern treasures when there was low hanging fruit closer to home. So it may have continued, until a plucky new Scrittler made his first visit to the Towers. Ben Finley (accompanied by Nathaniel Larrson) delved into the smaller boulders around the Towers and, reaching into the Dark, pulled out the Light. The circuit that he created is a pleasure to move through and serves as a fine warm up for the crag’s main event. There are about 20 problems between the grades 4 and 7A+, most of which are well worth doing, with particular highlights being the enthusiastically named Ready Brek? We Used To Dream Of Ready Brek! (7A+), Good Crack (4) and Ten Tiny Toes (6C).

With the bouldering circuit complete, Ben had no further excuses not to try the crag’s real unclaimed prize. The left side of Anniversary Arete sits above an awkward, to say the least of it, landing and is altogether blanker and bolder than its counterpart. Knowing that I hold in my possession no fewer than 3 bouldering pads, Ben decided that we should climb together some more, and duly conscripted me to be his sidekick for this particular adventure. A number of 3 hour round trips ensued. The first found the whole crag wet, but on walking out we looked over to the Slipstones side of the valley: “Those boulders there look quite big”. We promised to check them out the next weekend, only to find that Paul Clarke had beaten us to it.

Paul Clarke - born in Blackpool sometime in the early middle ages, he was raised on a thin broth-like concoction that made his hair fall out at age 6, but imbued him with mythically strong tendons. Since retiring, he is unquestionably the single greatest threat to unclimbed rock in Yorkshire. Although it is likely that High Crags (for that is the name of the boulders we had seen) had been climbed on in the past, Paul was the first to drag them from obscurity. The circuit that he developed along with Dave Turnbull sports a little over ten problems, with the cream being in the Font 6s (though, as usual, some of them really are going on Font 8). In particular, High Crags Ridge (6B+) and Armchair Thriller (6C+) are stand out quality, with the equally brilliant The Quill (7A) being added later by Ben Clarke.

Not to be deterred, Ben and I called in at the next opportunity to mop up what we could and were not disappointed. Whilst Ben cleaned up the sit start to High Crags Ridge, I got stuck into an easy looking warm up which had escaped Paul and Dave’s grasp. Some ten million attempts later I’d clutched, clung, and rocked up through a devilishly technical sequence and was clawing through damp scrittle to claim Will’s Wicked Warm Up Wall (6C+, and named by a third party). By this point, Ben had finished cleaning the sit start to the Ridge and I joined him. He took the first go and dropped the start. This was my chance. I hit the first big slap first time and planted my heel high on a rail on the left. Rocking up, I brawled through the slopers. It’s one of those climbs with no subtlety at all;  the kind of climb that you can stay on if you just refuse to let go - and I did refuse, until I was stood on the sanctuary of a good foothold, with just the steep ridge top out between me and glory. Ben was dismayed, crying all sorts of foul play that I’d flashed his problem, but it was not over yet.

Launching myself at the steep ridge in front of me, I began to hump - à cheval - up the rock. Thus ensued five minutes of agonising none-progress. Completely committed and beyond retreat, every time I inched forward, tantalisingly close to handholds that would have saved me, I would slither back down again, held on only by gripping the ridge tightly with my thighs. The stale-mate ended with a tumbling, slithering slide from the top of the crag onto the mats, Ben hooting with laughter, and I was left to let the pump subside from my inside legs. He nipped up to claim the prize of being first and I had to be content to follow, this time gracefully padding up the ridge, though not still without difficulty. Plummet Earth is one of those 6C+s that ends up getting 7A because it’s just so bloody good. And problems that good have to be 7th grade, don’t they? Dare I say, one of the best of its grade and type in the area?

Walking back from High Crags, we looked back over the valley towards the Twin Towers, and there, lying below the level of the track, near the river where no-one would see them. “Those boulders there look quite big”. The next day we were back on the north side of the valley at Twin Towers. A gale was blowing and the whole crag was dry - except the unclimbed arete of Ben’s desires. By some quirk of fate, the wind that had blown every inch of rock on the crag dry was also blowing water from a pothole on the crag top - right down the unclimbed arete. With the crag in nick, I took the opportunity to add English Rose (7A+), an ungradeably morpho dyno that solves the unclimbed direct start to the Tower’s central line.

With this out of the way we beat a hasty retreat down to the newly spotted stones by the River Burn. As Ben stumbled ahead of me through the wilted bracken, his giggling yelps that accompanied each new discovery floated back to me, acting as a premonition of my own excitement. There was plenty of rock here, but it might take some work to release the souls of the climbs from their lichenous prison. We set to scrubbing immediately. Thus far, four problems between 6A+ and 6C have been climbed: Midnight Oil (Left and Right) and Burning Man tackle an obvious proud roof, though each requires a jump start; Secret Service climbs a neat overhanging arete. There’s loads more to go at for Scrittlers old and new, though much of it suffers from seepage and some discreet spadework may be needed to remove a little earth from the tops of some of the boulders.

All the best stories come full circle and this is no exception. The final chapter is set in the very place we begun, at the unclimbed arete of Twin Towers. Except, it’s not unclimbed. Ben’s standing on the top, and he’s looking quite emotional. Today, the weather was just right. No cloying mist, no vicious wind blowing away the pads, just a striking arete line, cold connies and a wild dynamic move to a barn-dooring catch. The Siege Of Orléans (7B) took longer than we expected, but good things come to those who wait, and to those willing to seek. They’ll keep us going for a week or two, but we’ll soon be reaching into the dark once more, groping for the light.

Note: After the time of writing, certain routes at Twin Towers were retro-claimed by Phillipe Osborne. Up to date names and FA details are reflected in the guide available here. 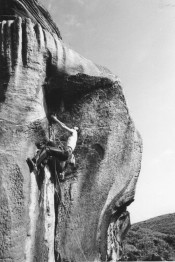 Mick Ward
19 Jan, 2017
Great article. Clarky's a wily bugger, isn't he? He'll keep you lot on your toes! Mick P.S. Have just spotted your Pex article (must have been having my afternoon nap when it first came out). Brought back lots of good memories of being out with the pekkies. Many thanks.
Will Hunt
20 Jan, 2017
Ta, Mick. Paul the Inimitable. Always one step ahead. It's even worse now he's retired.
lummox
23 Jan, 2017
I tried to prise info about Crag Xs from Herr Clarke a couple of times. Exercise in futility.
Add Comment
Loading Notifications...
Facebook Twitter Copy Email LinkedIn Pinterest