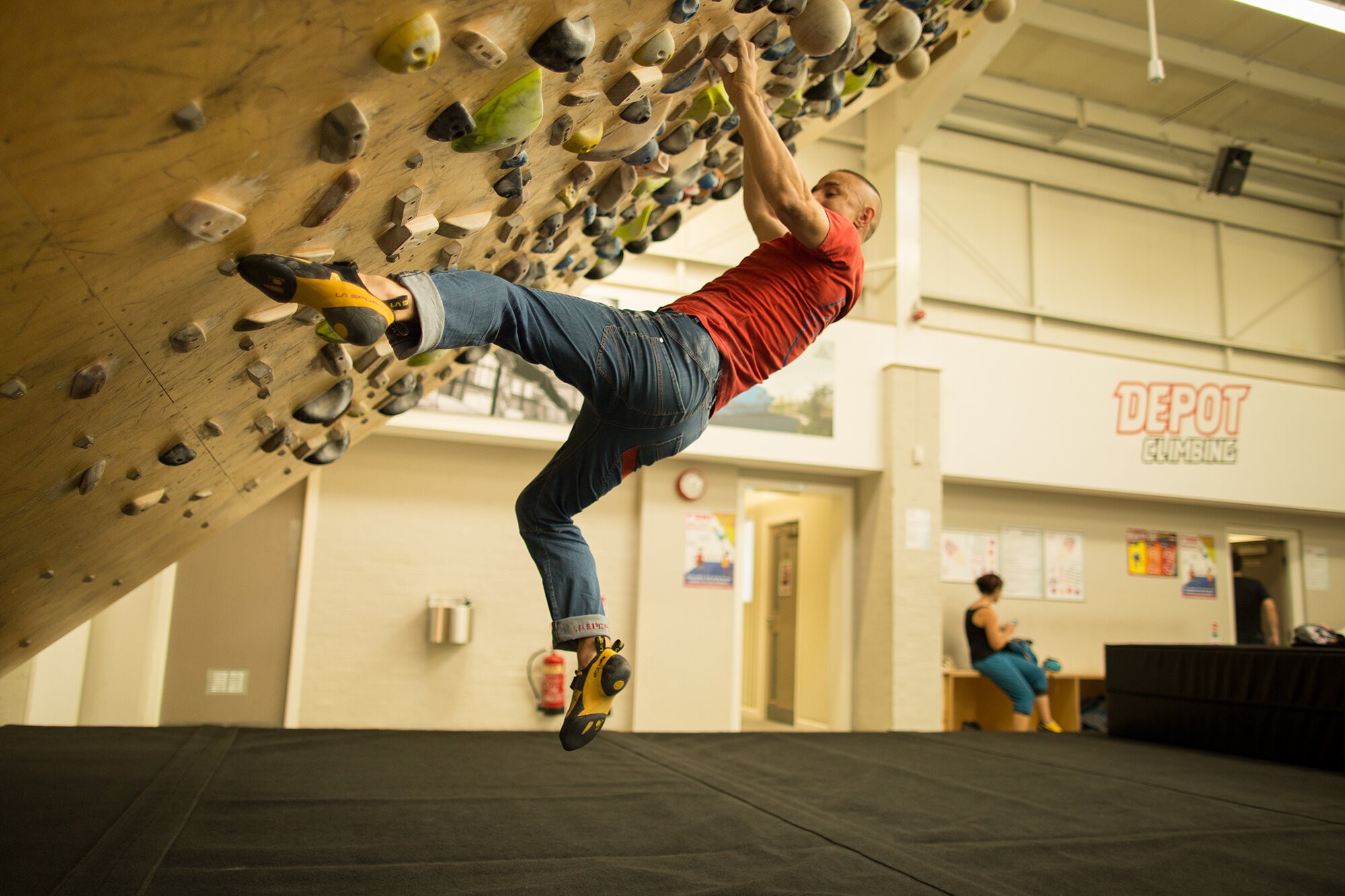 In this new series about the nuances of training on boards, Neil Gresham breaks down everything from how to warm up, different training methods, to planning sessions, and technique.
In association with Neil Gresham
Advertising on UKC
Share
Neil Gresham 7th April
This has been read 3,040 times
Share

In his fourth article on board climbing, Neil Gresham looks at mindset and overcoming the difficulty of board climbing. He then examines the advanced movement skills which you can hone through climbing on boards.

Newcomers to board training are often deterred by the sheer amount of time that is spent failing on things. We all naturally crave success and quick results, so it's tempting to default to climbing problems that we can achieve quickly. But board training is about pushing your limits.

It's about teaching yourself to make moves that you can't make, so by definition if you can do a problem straight away then it won't make you stronger! This is not to say that easier problems don't have a place, just that the hard ones represent the gateway to the next level. In short, if you're "failing" then you're succeeding!

The biggest lesson we can learn from board training is that that our mind creates all the barriers and that we are often too quick to dismiss things as impossible. The only way you'll ever know what you are capable of is if you commit to the long game with patience and determination (which are character traits that all the best climbers have in common). The key is to reduce the significance of end goals in your mind and to see the whole thing as a process. Some of these projects you will do and others you won't, but it really isn't about that. We must abandon the usual references points and measure progress on a micro-scale. If you latch a hold that you could only touch the previous session then this is progress!

At a glance, it's easy to think that board training is fairly low on the scale when it comes to mental pressures, but the more you do it, the more you'll meet your demons! To hit a PB or break a new barrier, by definition, you have to find something from within yourself that you've never found before. There are many possible strategies for coping with the pressure. Some climbers will diffuse it by keeping the atmosphere light with banter between tries, but if you do this then you need to take a moment to re-focus your attention before you pull on. Others will stare the pressure headlong in the face! Keep your body language positive: hold your head up, puff your chest out as you approach the board and chant a few encouraging mantras to yourself during rests! Above all, you need to imagine yourself completing this problem and prevent it from defeating you at a psychological level. The ability to do this is perhaps the most valuable skill that board training teaches us in preparation for climbing.

The relativity of boards

If you struggle to get your head around the difficulty of board training, then try flipping the negative. Boards create a 'worst-case-scenario' (ie: the holds are smaller and the angles are steeper) so that when we get out onto the crags or try pre-set problems in boulder circuits at the gym, we are pleasantly surprised! Or so the theory goes!

The active style of footwork that we use on a board is completely different to the passive style that we use when climbing on less-steep walls with large holds. To prevent our feet from popping straight off the footholds we must take the following measures.

Many climbers who struggle to keep their feet on a board are too quick to blame a lack of core strength. Whilst this may be the case on very steep walls with particularly small footholds, often it is more a matter of proprioception and body awareness.

Most experienced board climbers will favour down-turned shoes because they enable you to pull inwards with your feet, thus allowing you to maintain between your body and the foothold. A common question is whether to go for the stiffer or softer variety and this boils down to personal preference and the climbing style of the individual. My personal advice is to climb in shoes that are snug-fitting and in serviceable condition.

Some are of the opinion that sloppy old worn-out shoes will help you to get stronger but the risk here is that they will cause your footwork to regress. If you want to make things harder then try harder problems instead of wearing bad shoes! To help your pocket, resoles are affordable, as well as better for the planet and if you get high-quality shoes then the uppers will last.

Many climbers struggle to move dynamically. For some, it's a matter of confidence and that fear of surrendering control, whereas for others it may be caused by a weak link in the required movement chain. One thing's for sure, board training provides one of the best ways to turn this into a strength in your climbing. We'll look here at a classic sequence, but of course, there are many variations on the theme.

Deadpointing is the term used to describe 'slapping', dynamically for a hold, not because the climber can't reach, but because they aren't strong enough to make the move statically. This is determined by the size of the hold and it is relative to the strength level of the individual. In other words, one climber may be strong enough to make a particular move statically whereas another may be forced to slap. The term 'deadpoint' stems from the weightless moment at the top of the move.

Dynoing is required when the climber can't reach between the holds and is forced to jump. By definition, dyno problems usually involve relatively large holds that are a long way apart. Clearly in some cases the holds but that's when things start to become really challenging!

1. Check body position - decide whether to go front (hips parallel to the wall) on or side-on. Front-on may feel more strenuous in the first instance but easier to hold a resultant swing. In this case, we're going to try front-on first.

2. Decide whether to attempt the move from a higher or lower foothold. A higher foothold will make it feel more strenuous to reach the next handhold (ie: it will require more arm and finger strength); however, your foot will be less likely to pop. A lower foothold will make it easier to reach the handhold but it will be more likely that you will lose your foot and be forced to hold a swing.

3. Set the foot. Place accurately and drive the toe into the hold. Sometimes taking one foot off may be better than having two feet on in a bunched or off-balance position.

4. Generate momentum. Straighten the arms and lean back from the wall (bending/hinging at the waist) and then thrust the torso inwards, whilst simultaneously pushing up with the foot. One quick test, 'dummy' bounce may help you set up but any more than this will squander crucial time and energy. A common fault is to pull up fast but then to stop at the top of the pull and kill all the momentum. This will mean that the climber reaches too late and drops down as they touch the target hold.

5. Be aware of the direction of travel. Diagonal moves may require penduluming of the hips in order to steer the body. In some cases, you will need to push the lower/'passive' foot against the panel.

6. Aim to hit the target hold when still travelling slightly upwards, in order to give yourself time to tense your body and take the strain, otherwise, you may simply be ripped off the hold.

7. Aim for your hips to finish centrally and directly below the holds, so as to minimise outward swing.

8. At the precise moment of contact with the hold, tense the entire chain of muscles in your body, from your tip-toe, all the way up through your body and into your fingers, in an attempt to make the foot stick. But if that doesn't happen...

Front on Vs side on

Climbing side on often seems like a more efficient option than climbing front-on, especially to those who are more used to sport climbing than bouldering. Whilst twisting-in may make it easier to reach the next hand-hold, if your foot then pops, you will be forced to deal with an awkward 'cork-screw' rotational in your body, which will make it difficult to hold the swing. It's always a cost-benefit analysis and the best solution will vary from problem to problem. You simply need to try both options and practice frequently so that you can spot the best option more quickly.

Neil Gresham has been coaching and writing training articles since 1993. His new routes, Sabotage 8c+ (Malham Cove) and Final Score E10 7a (Lake District) were both climbed during his late 40s and his 2012 Deep Water Solo in Pembroke, Olympiad 8b remains unrepeated. Neil offers personalised training plans at www.neilgresham.com / @neil_gresham