New Topic
This topic has been archived, and won't accept reply postings.
VernonA 18 Oct 2010
I'm going to be staying near Helman Tor for a few days next week, and thought it would be rude not to enjoy a bit of bouldering. If anyone has any topo details they can pass on it would be most appreciated.

Helman Tor's pretty small and hard to get lost,so the UKC crag entry should suffice.

The following are described in the entry as follows:

UPPER CAVE AREA Scattered area at the very top of the tor, also including the lines in the cave over the back of the tor.

SUMMIT AREA Not actually the summit, but the westward face immediately below. Problems run L-R from Problem 12 (Face Direct) to No Grieving - a couple of the V3s and the V5 are fierce.

LOWER AREA This is actually two areas. There is a large obvious wall with routes running L-R from Hells Angels to Angel Delight, there is also a E1 to the right of the E4 which is detailed on Javu.

The second part of the lower area is the obvious area of slabs. Problems run L-R from problem 24 to problem 18 (problem 25 is in the wrong place - should be left of problem 24). The V2 left arete is awesome.

There are a few more problems detailed in the Cheesewring guide, but it's out of print and they're largely so overgrown as to be pretty much inaccessible.

It's an lovely place and dries very quickly after rain. Landings are good, but the granite is very abrasive, as I proved with a trip to Treliske A&E.

Tom
OP VernonA 18 Oct 2010
Many thanks for everyone's comments and links, all put together I should be able to find my way around no problem. Hopefully I'll have a few hours of fun there, and to return with most of my skin still intact. 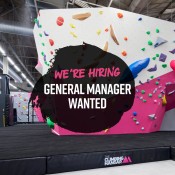 Podcast Factor Two - On and Off, A Headpointing Story

Pete Whittaker has made the first ascent of a mega 100-metre, three-pitch E8 roof crack in Natalie Zawn, Gogarth, North Wales, which he believes could be the longest roof climb established to date in the UK. The first pitch (E6 6c)...

Article Thou Shalt Not Wreck the Place: Climbing, Ecology and Renewal