New Topic
Please Register as a New User in order to reply to this topic.
UKC Gear 04 May 2022

We are very excited to announce the publication of a new and fully-updated edition of Eastern Grit: the most popular climbing area in the UK.

Any chance of a new Western Grit coming soon?

> Any chance of a new Western Grit coming soon?

I will be starting work on it next week - so don't hold your breath!

I hope the topo on the Rockfax app for the North Bay at Millstone, isn't the one going in the printed guidebook.  It's completely wrong.....

That is a strange scaling bug in the app. We are still trying to figure out what happened there. Got a few other minor digital-only bugs to sort before rolling out an update. Book is fine.

Thank goodness for that!

looks good but don't think many green spot climbers will be tackling My Kai at Shinning Cliff !

Talking of bugs - I mentioned last week I had problems with the order of buttress in the update. As suggested I deleted all the crags in Eastern Grit, this wasn't as straightforward as I expected - they didn't all delete automatically, some would go but then the deleting would stop so I'd need to force close the app, relaunch it and delete the next few.

Finally I got rid of all of them, closed the app, re-launched it and downloaded all the crags again. This seems to have fixed the order of the buttresses issue, but unfortunately, now (like with all the Peak Limestone crags) I can't log routes through the app. Indeed trying to log a climb usually crashes the topo back to the crag intro page or even just closes the whole app.

Anyone else seeing this? Because it used to work great, it's vaguely annoying when the feature stops working.

>  looks good but don't think many green spot climbers will be tackling My Kai at Shinning Cliff !

This is an android issue that displays some white spot routes incorrectly. A solution is being worked on.

Talking of loging climbs and bugs: If using ukc on my phone if I log a boulder problem "Sent after Practice" is nolonger an option under style unless I add the problem to my logbook then edit the style afterwards.

I’ll take a look into this 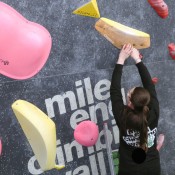