Skip over navigation
New Topic Reply to Topic
Please Register as a New User in order to reply to this topic.
Denise Prior CAN 02 Jul 2019 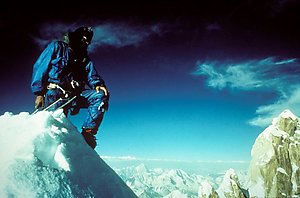 Doug and Chris Bonington, made the first ascent of The Ogre [Baintha Brakk 7285m] in the Karakoram in 1977.  Their climb extended the boundaries of what had been achieved before at that altitude. But it was the subsequent descent from the summit in the dark, turning a catalogue of disasters that would have defeated most people, into an epic which has since entered mountaineering folklore. The legendary mountaineer will be telling a thrilling tale of hard climbing, team work and survival against all odds, in his famously laconic and humorous style.

Slipping on the abseil below the summit, Doug's broke both legs just above the ankles and lost his spectacles and ice axe. He and Chris were forced to spend the night on a snow patch, warding off frost bite. Storm and starvation and days of crawling on hands and knees followed but they had to carry on regardless before losing all their remaining strength. Then Chris abseiled off the end of the rope, smashing his ribs and later contracting contracted pneumonia. With the selfless help of Mo Anthoine and Clive Rowland, it took them eight days to reach Base Camp but the adventure did not stop there. And it was another 24 years before The Ogre was climbed again.

Proceeds from the evening will support the work of Community Action Nepal www.canepal.org.uk and include a sale of Nepalese goods and an auction of signed framed mountaineering prints. Doug will update the audience about the post-earthquake reconstruction of CAN’s projects.  He will also be signing copies of his posters and award-winning books, including 'The Ogre'.

Wind your necks in. Denise is amongst the best of us and CAN is a great charity, who are paying for their advertising. There’s no problem here.

Report
Timmd 22 Jul 2019
In reply to Tom Last: Yes, CAN is an excellent charity.
Post edited at 23:29
Report
leon 1 05 Nov 2019
In reply to Denise Prior CAN:  I see that to celebrate this ad entering into its fifth month(It surely must be almost time for the Summer tour dates to be announced..) only positive comments about CAN remain. Other comments removed.
Post edited at 13:40
Report

Digital Feature The Finest Crags in the UK & Ireland: Curbar

Video Rite of Passage - Paul and Eli Pritchard in the Himalaya

In November 2019, 12-year-old Eli Pritchard took his dad, Paul Pritchard, on a father-and-son trip to the Khumbu region of the Nepal Himalaya. Paul was left hemiplegic after an accident on the Totem Pole off the coast of Tasmania in...

Press Release Emma Twyford and The Big Bang: on tour