Skip over navigation
New Topic Reply to Topic
Please Register as a New User in order to reply to this topic.
KilimanjaroTanzanite 19 Jan 2020 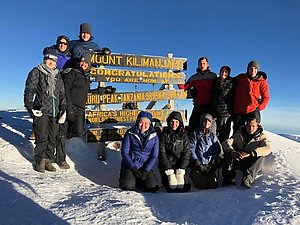 German missionary Johannes Rebmann wrote about a snow-capped peak on the Equator in 1848, while the first attempt to climb was in 1861 by German officer Baron Carl Claus von der Decken and British geologist Richard Thornton was not successful. It was in 1889 when the German geographer Hans Meyer became the first foreigner to reach Kibo Peak at height of 5895m

Climbing Mount Kilimanjaro is like the journey from the tropic of the equator to the arctic and back. The higher you climb, the colder it gets; Mount Kilimanjaro composes several major climatic zones. You start from the surrounding hot, tropical region (800-1,900 metres). You then walk through the dense and lush montane forest (1,900-2,900 metres) inhabited with primates, antelopes and even elephants. After the forest, you reach the bushy and grassy health and moorland (2,900-4000metres) with huge heather and giant, alien-looking lobelias.

For those mountaineers who look for real adventures in private climb and sense of ecotourism, western Kilimanjaro routes are recommended. Shira trail, Lemosho and northern circuit route has few tourists and hence a responsible travel destination. Brigham Young University is an American University from Utah state which runs ecotourism study adventures abroad by climbing Mount Kilimanjaro. Students and lecturers from BYU trek Kilimanjaro to earn necessary Mountaineering practical and experience the real eco-adventure through Kilimanjaro Tanzanite Safaris Company Limited. Check the review from the Lecturers of Brigham Young University.

Although climbing Mount Kilimanjaro is feasible to many people, no one said it is going to be easy. Keep in mind that it will be a challenging hiking experience, so the best advice is to prepare proper trekking gears and do enough climbing training. Note that acclimatization is important because as you ascend high, oxygen level at high altitude decrease.

A wide band of exceptionally beautiful montane forest encircles the whole of Kilimanjaro from about 1800 – 2800m. About 96% of the water on Kilimanjaro originates from within this zone. The forest zone is worth a visit even if you are not climbing the peaks. Marangu nature trails, in particular, take you through this forest belt. This belt supports several plant species, including endemic plants like Impatiens kilimanjari.

This the crater is about 15 minutes walk past Mandara huts on the Marangu route. On clear days, the crater provides a panoramic view of Lakes Chala, Jipe and Nyumba ya Mungu, all of which derive their waters from the Majestic Kilimanjaro.

Lake Chala is located about 30 minutes’ drive from Himo town. Although situated outside the Park, the lake is an important geological link to the park. It draws its water via underground streams that originate from Kilimanjaro National Park. This deep freshwater lake can be visited prior to, or after climbing the mountain.

Mountain Kilimanjaro inhabits 140 species of mammals; 7 primates, 25 carnivores, 25 antelopes and 24 species of bat. Hikes may view various animals including The Black and White Colobus Monkey, Blue Monkey, Forest Duikers and small mammals like Myosorex zinkii which is endemic to Mt. Kilimanjaro. Buffaloes, Elands and Elephants are the large mammals often seen on Shira plateau and along Rongai route.

Climbing to the Summit

Climbing to Kibo peak takes from 5, 6, 7 or more days depending on the route and the choice of the climber. The more days, the higher the possibility to conquer the Summit because of enough time to acclimatize and also climbers avoid fatigue because have enough time to rest. An extra day in any station above 3000m above sea level during the climb is highly recommended for adequate acclimatization. Six mountain trails can take a climber to the mountain peak, each route offering different attractions and challenges. Here are tips and Kilimanjaro hiking packing list details, read more…

Tourists have a chance to cycle inside the park. There are two routes which are used for cycling, one for summit bound visitors (Kilema route) and the second one for non-summit visitors (Shira plateau).

Paragliders should feel at home on Mount Kilimanjaro when free-flying from the World’s highest freestanding mountain. Tourists may use parachutes or wingsuits while undertaking this activity.

Camping in the crater provides unique visitors’ night experience. While at the crater tourists can visit the unique bench-shaped glaciers, the formation that can only be found at Mount Kilimanjaro.

Mawenzi is the second-highest peak on Mount Kilimanjaro. The rugged peak of Mawenzi (5,149m) lies to the East of the Park. The top of its Western face is fairly steep with may crags, pinnacles and dyke swarms. Its Eastern side falls in cliffs over 1,000m high in a complex of gullies and rock faces, rising above two deep gorges. Technical climbers can hike the present seven sub-peaks namely Nordecke 5136m, Hans Meyer 5149m, highest point, Purtscheller 5120m, Borchers 5115m, Klute 5096m, Latham 5087m and Londt point 4945m depending on the time and season of the year.

People who love to see Mount Kilimanjaro attractions without climbing can do day tours from Moshi. Moshi is the tourist town at the foothills of Mount Kilimanjaro and day trips to these attractions are affordable and enjoyable. Even for climbers to the summit, these are amazing trips to do when you have spare time like 3 hours or one day in Moshi.

·         Day walk to Maundi crater in the park, Lake Chala and cultural sites such as Kifunika and cultural camps in the villages around.

Even though one can climb throughout the year, the best months to hike are mid-June to October and December to mid-March. These months have favourite weather for Kilimanjaro trekking adventures, it means with the absence of little rain.