New Topic Reply to Topic
Please Register as a New User in order to reply to this topic.
Linda Orritt  UKC Supporter 23 Jan 2021 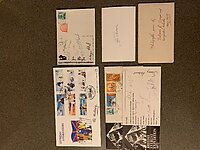 Bonatti. On The Heights. Unsigned first in very good condition £57

Ed Caesar The Moth and the Mountain. Signed brand new £27

Alex Honnold. Alone on the Wall. First as new. £24

Cathy O’Dowd Just for the Love of it. Cathy was the first woman to climb Everest from both sides. Signed first, brief dedication great condition h/b £27

Jim Perrin. On and off The Rocks   Great condition h/b Signed by Jim and Chris Bonington  £29

Doug Scott  Up and About  brand new first h/b  signed by Scott, Bonington and Paul Braithwaite £49

Last but not least  :-  A Signed Photograph taken by H W Tillman and signed on the back by him. I will include a photocopy of a handwritten letter by Tillman talking about the Crozet islands  This  photograph is either of the Crozet or Kerguelan islands. I’m looking for offers over £290 for this  extremely rare signature

Please email me on “linda orritt@yahoo.co.uk ”with any questions or if you wish to buy anything  As always all profits go to Community Action Nepal charity - for Doug

I've sent you an email Linda.

I hope that you are getting out and not just eating cake and drinking tea.....

Login to Reply
Safaribrit 24 Jan 2021
In reply to Linda Orritt:

Some real gems here Linda. Thanks for all your efforts for CAN. Hopefully collectors will pile in and make a contribution to a great cause in memory of Doug.

Ed Caesar. The Moth and the Mountain

Ed Hillary. From the Ocean to the Sky

Doug Scott. Up and About

The Annapurna postcard is also sold.
Thank you so much.

Sold.
On and Off The Rocks

Voices from the Summit

many thanks once again.

Keep up the great work for CAN.

Refill of mezcal next time.

Yet again my book arrived quickly, very well packaged and as described

Very best of luck with your work for CAN

Hi Linda, any chance of an edited list with whats’s left? Thanks.

Cathy O’Dowd    Just for the Love of It

Tom Patey    One Mans Mountains  ( rare this one)

Don Whillans     Portrait of a Mountaineer

Bonatti Mont Blanc and On The Heights

The Dennis Gray ones both h/b and p/b

The Everest post card with signatures such as Dougal Haston and Nick Estcourt (I’m happy to reduce this to £110.)

Also I have another Up and About Doug Scott. Signed by Doug and I can also get Paul to sign it £45

The Wall. Alexander and Thomas Huber £25

and Everest Goddess of the Wind. Signed by:-

Happy Shopping - I will put more on next week to make full use of this premium post. Please keep looking and email me if you’re after anything in particular?

If classic rock is still available, I'd take it.

Hi Andi Yes it is. I’ve messaged you.
thank you

I have made a mistake with the Tom Patey book as it’s a fifth impression. It is however in lovely condition and still a great read.

I received this yesterday and it's absolutely fantastic. Perfect condition, and packaged expertly. Thank you.

Did you manage to auction mine off? Got some others as well atm

yes I did thanks Gary. Plus Mike gave me his to sell. Hope you’re well.

There are a few books still available and this post will expire at weekend-happy to take a little less for some of them so long as they still make a little  for Community Action Nepal. Email me with any questions/requests please.
thanks.

Login to Reply
Offwidth 19 Feb 2021
In reply to Linda Orritt:

Just wanted to thank everybody who has bought books and cards from me. Community Action Nepal and myself really appreciate every single £1 spent   Thank you.

Press Release Being a Field Guide in Antarctica

The UIAA has announced plans to establish a Mountain Worker Initiative with the aim of supporting people working in the expedition and trekking industry, prompted by the issues of low pay and poor working conditions raised in the documentary film The...