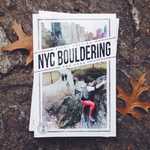 Gaz Leah is a Brit living in New York, and has released a guidebook to bouldering in the Big Apple.

Here he talks about his quest to find real rock in the concrete jungle, discovering the secrets of New York bouldering, and getting to grips with his first ever guidebook project...

I'm so gutted this wasn't out while I spent a few weeks in New York last year!
Totally should have spoken to Adam Radcliff and got linked up with Gaz - good effort mate
Paul Phillips - UKC and UKH  UKC Supporter 30 Jul 2014
In reply to UKC Articles:

Cool article. Like someone else said, would have been nice to know about this when i was there.

Not surprised that this was created by a Brit. Guidebooks and documenting climbs seems to be a british obsession. From my limited experience i find that outside of britain, boulderers tend to like to keep their knowledge to themselves. Probably an access thing.
owensum 30 Jul 2014
Yeah a surprising number of guidebooks to major US/canadian destinations have been written by Brits - Bishop bouldering (Wills Young and Mick Ryan), Squamish climbing (Kevin McClane), Rifle climbing (Dave Pegg, also head of Wolverine publishing).. well cant think of any more, but thats a few...
rgold 31 Jul 2014
In reply to owensum:

Scottish - still British, at least for the moment!

Paul Ross? He's done hundreds of new routes in USA but has he published guide books to 'em? If not he must have had a big hand in on-line info, most recently for San Rafael Swell, I would imagine.

I've only been to New York City once, in 1989, and was simply doing a 2 day tourist thing after a few days at The Gunks. This naturally took us into Central Park where we gravitated to a rock outcrop and were surprised and delighted to find some guys bouldering - turned out to be Rat Rock. They even lent me shoes to have a go.
rgold 31 Jul 2014
In reply to Martin Bennett:

Paul Ross coauthored a guidebook to North Conway rock climbing (with Chris Elms) in 1978. I don't know if he's written other guides. He has had an enormously prolific climbing career in the US.
owensum 31 Jul 2014
Gaz kind of makes it sounds like there was no information available for NYC bouldering anywhere apart from talking to people. In fact, there already exists a pretty good online guide (which has been around a while apparently):

Thanks for the shout out! It's great to have a positive response. Owensum, your totally correct. Their is a website with some patchy information that has been around some time. I'm sure if you pick up a copy you'll agree that the book covers a LOT more than simply central park and in much greater detail. I hope we did this unique area justice and people enjoy the climbing.

I'm currently working on a new project to complete what could be one of the worlds longest routes. can check it out here: www.Fundly.com/ClimbersAgainstCancer

Gaz
New Topic
This topic has been archived, and won't accept reply postings.

Podcast Lyme Disease - What You Need to Know