Share
Reviewed by Alan James UKC 10th May, 2019
This has been read 10,710 times
Price: £80Brands: Climbing Technology
Share
We receive free products for review from brands, many of whom advertise on the site. We work on strict condition of editorial independence, and no guarantee of endorsement

The Click Up+ is an updated version of the popular Click Up assisted braking belay device that was first introduced six years ago. We reviewed that back in 2013 and then the original Click Up was chosen as our Best in Test in our Assisted Braking Belay Devices group test in May 2017. With such high praise for the first version, could the new '+' model live up to, or even improve on, the original?

We've had the Click Up+ for a few months and have been testing it at the climbing wall in the winter, where we used it on old wall-type ropes for top-roping, and leading on thinner ropes. It has also been used outdoors in the Peak District and the Costa Blanca.

The main visual change in the device is the shape. The Click Up+ is slightly larger than its predecessor, being longer and tapered to fit better in your hand - but it actually weighs a fraction less. This weight saving is most likely due to the increased use of plastic in the body of the device, with the forged metal section being a good bit smaller. The basic mechanism has not changed much although the hidden spring in the original has been replaced by a double spring mechanism in this one, which is more obvious. There is also a small sprung plate which separates the climber and hand rope called the 'V-proof System'.

So there isn't much difference between the two devices in the way they sit on your rack. They both use the carabiner supplied which is an essential part of the locking mechanism. The increased use of plastic may make the new version a little more fragile although it still feels very robust.

As an aside, we found that the surface of the supplied Climbing Technology carabiner does wear quite quickly and leaves some slightly protruding edges where the rope runs over. We have replaced ours because of this, which is unfortunate since the device itself seems to have a very long lifespan, and yet you can't just replace it with any carabiner - it really does need to have exactly the same diameter. We have fed this comment back to Climbing Technology, who are looking into it.

One of the strong points of the original Click Up was its handling of the rope and the ability to feed the rope through quickly when paying out to a lead climber. This was the main feature that put it above other devices in our group test - it simply is unbeatable when it comes to combining quick feed without locking up the device, with safe quick locking in the event of a fall. Unfortunately the Click Up+ seems to have taken a step backwards in this respect. When feeding quickly it locks frequently and has become difficult to use. This is significantly worse with older and fatter ropes above 9.8mm.

We approached Stefano Codiazzi of Climbing Technology about this at the trade show in Munich in January and he made this video for us in response:

The main difference appears to be that the optimum hand position has been changed so that you held the rope higher when feeding, as illustrated in the two photos below:

Once we tried this it did indeed work as smoothly as illustrated by Stefano in the video. In further conversations we discovered that the main reason for this had been a possible problem with the original device should you hold the rope really high with both hands. This is an unnatural position for most experienced climbers but has been seen with some beginners. This feature when combined with the 'V-proof system' plate makes such a problem virtually impossible and as such can be said to make the device safer.

The problem we have with this is that it appears to have solved a problem that 99% of users never had. No experienced climber would hold both the climber and control rope high above the device; most actually prefer to loosely hold the hand rope below the device and feed it through by releasing it. To this end the position of your lower hand was irrelevant - it worked in all positions. The Click Up+ only really works if you hold your lower hand out in front of the device as shown in the video. What is worse is that the extra sensitivity means that any slight deviation from this position will probably mean you will lock the device up. Once locked up the Click Up is slightly harder to unlock than the original, since the notch in the device that keeps the carabiner in place is deeper.

It is also claimed to work on ropes up to 11mm diameter. Since there are virtually none of these around any more we haven't been able to test this, however I would strongly doubt this since we were getting it locking up on slightly furry 10mm ropes.

Overall for us, the handling for feeding the rope is some way short of a '+'.

When catching a fall the extra sensitivity obviously is more of a benefit. It responds incredibly well to any fall and locks solidly. We have used it on some pretty thin ropes down to around 8.9mm and it was fine, and as a bonus the feeding was much smoother as well, although still not as good as the original Click Up. There can be a tiny bit of slippage on the thinnest rope with a heavy climber, but usually it locks solid if you release your holding grip a bit on the lower rope.

When lowering from a fall or belay, that better ergonomic design of the device is an improvement. It sits nicely in your hand and is easy to angle to reduce the friction and lower the climber smoothly. The fact that it is made of plastic also means that it doesn't get quite as hot in your hands on long lowers although, as with the original, it should not be used for abseiling. We did notice the V-proof plate lifting a little on occasion when lowering. This doesn't appear to cause any problems though.

Overall this is a bit of a disappointment. The feeding mechanism is too sensitive and has been implemented to avoid a problem that the vast majority of climbers would never experience. It is a safer device for top-roping and for belaying with inexperienced climbers, but most people who use the old Click Up will find the new version frustrating. You can adapt your belaying style to make it work almost as well as the original, but you shouldn't have to do that. We are pleased to say though that the brilliant original Click Up is still available!

CLICK UP + is an innovative manual braking belay device, evolution of the well-established CLICK UP model, that has been available to the public for seven years now. Designed specifically for indoor and crag climbing, it can be used with all dynamic single ropes in the 8.5 to 11 mm Ø range. Lightweight and compact, it allows for belaying a leader or a top-roping climber, both hands handling the rope. 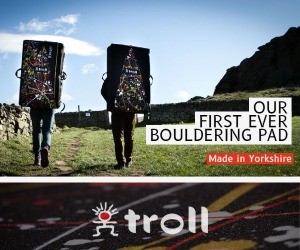 Climbing Technology New Click Up Colours and Tuner I Lanyard

The Climbing Technology Click Up is one of the most popular belay devices on the market. Spring 2022 sees the introduction of three new colours.

Accidents due to incorrect use... FS: belay glasses for sale Lost belay device - E Scotland Belaying with twin ropes and a... Running Belay? Millgram and Obedience or How to... Tie off belay plate - best method So many people in the wall... List more discussions...

That alternate way of holding the rope looks useful, we have struggled with the device as it is really quite 'snatchy', and tricky to release once it has grabbed.

I agree totally with the review in that the device feels like a step backwards in usability,

Glad to see this review saying pretty much exactly what I would have said!

Hurrah for the original Click-up

Boo and be gone with you to the Click-up +

Overall I concur, it's not as usable as i'd have liked for an 'improved' model. However one thing I have noticed is that for very soft ropes it's handling is better than the original Click up. I think that is because it accommodates wider diameter ropes and the suppleness mitigates the grabbiness somehow. But for stiffer ropes (new Simond 10mm wall rope) the handling is better in the original click up.

Another thumbs up for the review from me. I love my original Click Up and have never had any bother with it. I tried a mate's CU+ and could not get on with it at all

"... and yet you can't just replace it with any carabiner - it really does need to have exactly the same diameter."

Then maybe I've struck lucky, since I've been using my (original) ClickUp with a DMM Rhino, and it works fine.

(There was no carabiner supplied with it when I bought it.)

In September Black Diamond and Visit Innsbruck teamed up to invite UKClimbing, among others, to the World Youth Championships. As well as watching the event, we managed to try a couple of up and coming products, the ATC Pilot and...

If there's a big weight difference between lead climber and belayer, the Edelrid Ohm offers a genuine safety gain. Rob Greenwood's initial scepticism was blown out of the water when he got to use this ingenious device in anger...

Assisted-braking belay devices are popular for indoor and outdoor sport climbing, adding extra braking in the event of a fall...

It's light, it offers loads of grip for secure belaying, and it works smoothly on a range of rope diameters - what's not to like? Dan...

On 25-26th January UKC were invited to the launch of the forthcoming Petzl GRIGRI+, which is due to hit the shops in April this...

Assisted braking belay devices help catch a leader fall by doing some of the braking work for you. With no moving parts, the Jul 2 is...