Edelrid Corbie - for when weight is everything Review

Share
Reviewed by TobyA 13th November, 2014
This has been read 14,949 times
Price: £140Brands: Edelrid
Share
We receive free products for review from brands, many of whom advertise on the site. We work on strict condition of editorial independence, and no guarantee of endorsement

With the 8.6 mm Corbie, Edelrid have taken back the title of producing the world’s thinnest and lightest single rope, although actually it is a triple-rated rope meaning you can use it as a single, double or twin rope. In many ways the Corbie is best described as a “concept rope” - Edelrid pushed their technical limits to make a single rope this thin, and were rewarded with an ISPO Gold Award for their design. If absolute lightness is your first priority, then the Corbie might be the rope for you - but it is a very specialist rope and has some limitations that need to be understood that go with that amazingly low weight and bulk.

To get the weight and diameter that low, Edelrid have reduced the thickness of the rope’s sheath. So whilst the core of the rope make it just as strong and impact absorbing as it slightly heavier brethren, the Corbie’s sheath is thinner and less durable. Testing the Corbie for UKclimbing confirmed this, with granite abrading the rope noticeably in places and needing me to twice chop one of the two Corbies sent to us for testing. Edelrid clearly state on their website that this is not a rope for top-roping or working routes, and indeed Edelrid themselves make many other ropes far more suited to those roles. Nevertheless, the damage I did to the one Corbie resulted from just normal cragging - so either during the process of leading, lowering or seconding without falls being taken - a number of single pitch routes, over a day’s climbing.

Obviously then, the Corbie is a not a general cragging rope. If you are interested in the idea of a triple-rated rope (and I am increasingly finding them to be the most useful type of rope I use), then Edelrid Swift would be a better bet - the Swift I reviewed for UKC is still going strong three years later. I feel the Corbie will be at it best in applications where abrasion is less of a worry but where its ultra-low weight will help; snowy peaks at high altitude? As the ultimate sending rope for hard sport routes on overhung limestone? The two Corbies I was sent for review also worked well as a pair of doubles for long trad routes; they were particularly good when climbing with two seconds meaning both climbers coming up behind the leader had the reassurance that they were tied to rope rated as a single, but of course there are other triple-rated ropes that do this and that might be more durable when used as singles.

In the hand, the Corbie does not actually feel particularly thin - so despite the slightly alarming stated diameter of 8.6 mms, in use it doesn’t feel any different to the triple-rated 9s and 8.9s that I’ve tried. Nevertheless, we should take seriously the manufacturers stated diameter when considering belay devices. It is noticeable that not many belay devices on the market are cleared for use with a single rope as thin as the Corbie. Here, it would be very helpful if Edelrid would make a clear recommendation of which of their own belay devices would be best suited for use with the Corbie as a single rope.

Along with the two Corbie ropes, I was also sent to review an Edelrid Mega Jul belay device and also its smaller sibling, the Micro Jul. The instructions that come with the devices say that the Mega Jul can handle a single rope from 8.9 mms to 10.5. This means that at 8.6 mms, the Corbie is too thin. Likewise, the same instructions suggest the Micro Jul be used with single ropes equal to, or smaller than 8.9 mms. Nevertheless, in discussions with Edelrid they told me that the Micro Jul was really designed as a belay device for their very thin twin ropes, the 6.9 mm Flycatchers, and is excessively grabby when used for a single rope. They speculated this might have been how I managed to damage the sheath of the Corbie. Indeed now their own website, and those of various shops that sell the Micro Jul, say it is designed for use with twins or doubles. Secondly, I was advised that the Mega Jul can be used with single ropes down to 8.6 mms, and the same is said by Daniel Gebel of Edelrid in this video. My own use of the Corbie as a single rope supports this, it seems to work fine with Mega Jul - holding a climbers weight and lowering were no problem (indeed I also tried the Corbie with my well-worn Black Diamond ATC Guide and Petzl Reverso 3, and both also gave plenty of friction for holding climbers weight and lowering on a single Corbie).

All the same, this advice (and the advice not to use the Micro Jul for a single rope) is contradicted by the instructions that came with my Micro and Mega Juls, and that are still available on Edelrid’s website at the time of writing in late October, hence our call for Edelrid to clarify their advice on this issue.

The Corbie is an amazing technical achievement and the technology involved in making a single rope of such low weight will surely feed through into more mainstream ropes over the next years. That low weight does come at the cost of durability, making this not the ideal rope for general climbing, but if you need the absolutely lightest single rope available and understand the trade-offs, then the Corbie is currently the contender to beat. 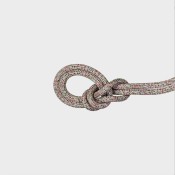 David Rose
13 Nov, 2014
The article repeatedly talks about the rope having a thin "sheaf". I assume you mean "sheath". You might want to tidy this up.
Jack Geldard
13 Nov, 2014
Thanks David, done. J
winhill
13 Nov, 2014
It's probably because the of the River Sheaf in Sheffield, or the rope's organic or something.
stp
13 Nov, 2014
Bit of a strange review. Despite going on about the light weight it is never once compared to other ropes to see how much weight is actually saved. I also don't see any benefit in thinner ropes at all, only the saving in weight but if there is one it would be nice to know what that is. For rock climbing one obvious use is that of redpointing very long sport routes that are at one's limit, particularly where the cruxes are high up. In those situations the savings per metre add up because you've got so many metrres of rope hanging from your harness like a weight belt. People were using 8.8mm ropes back in the 80s for just this use (though admittedly the ropes weren't officially considered single ropes). It's also worth mentioning that using ultralight ropes in such situations can also be helped by using roller-biners, karabiners that that have a rotating roller on the hook. These help reduce strain in two ways. First the roller means that you eliminate scorched sheaths from the heat generated by friction through the hook of of the karabiner. This is surely going to help prolong the life of ropes like this one that have a very thin sheath. Secondly the impact of the fall is distributed much better throughout the whole rope. This is very noticeable to the climber because falls always feel softer as more of the rope stretches absorbing the shock of the fall. I think these biners are great with any rope but with particularly light/thin ones, that wear out rapidly, I think they'd be pretty much a must have item. With this rope maybe the benefits of rollers would be enough to turn it from a concept rope to something more practical? Who knows, another interesting test for UKC staff to try out perhaps?
jimtitt
13 Nov, 2014
It´s 1g per m lighter than the manufacturers claim for the Beal Joker which is also triple rated. If that 20 or 30g is what´s stopping that gnar send then carry on and buy one!
More Comments
Add Comment
Loading Notifications...
Facebook Twitter Copy Email