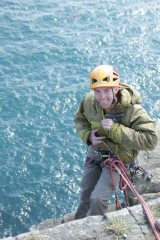 As someone who likes to push their grade on trad I want a pair of half ropes that's light and easy to handle; but I often feel torn between weight and durability. To my mind ropes are the most important part of the safety system, plus a good pair can have a positive effect on your performance compared to those stiff, old 9+mm ropes you currently drag up pitches!

With the Duettos, from Sterling's Evolution range, it looked like I had a good middle ground between a fat cable and a less reassuringly durable ultra-thin model.

There are many ways to select a half rope; you can go by the colour or how cool the name sounds, you can get one that's on offer or one that's reassuringly expensive. No one rope is the best, it all depends what you personally want. When choosing a pair I primarily look at the diameter, the weight per metre and the impact force.

At 8.4mm the Sterling Duetto is by today's standards a mid-thickness half rope. If saving every last gram is a priority then you can go thinner still, but for most of us the need for durability probably outweighs this. At 45g/m the Duetto is pretty light, though again not the lightest on the market (by a long way). I'd say this is actually a good thing, as this shows potential for good durability (though this is never an easy thing to predict before you actually start using them).

For me, one of the most important bits of technical information to look at is the impact force of a rope. I usually work out roughly what sort of thickness I'm going for and then pick the rope with best impact force. The lower the impact force, the more energy the ropes take out of the fall, which is what I want when I'm pumped and frantically stuffing in gear, or climbing on loose rock. The Duettos have an impact force of 6.5kN which is about as good as it gets for ropes of this diameter.

As an added cherry on the cake the Duettos are dry treated, which is great if you like winter climbing or mountaineering or if, like me, you are clumsy and drop your ropes into rockpools or get caught out in the rain because "it might not rain".

On paper the Duetto looks really good, but how do they perform in real life?

The first thing to note is that they are barrel coiled, which means you need to uncoil them properly before using them. I personally found this to be quite tricky and definitely didn't do the best job of it. This initially caused them to be a little more prone to kinking than I have previously experienced, though it has never been a massive issue and with more use has sorted itself out. It is worth bearing in mind that you can't just buy these ropes on the way to the crag, open the packet and start using them. You want a few people to help you uncoil them, ideally someone who has experience of doing it before!

After having a minor nightmare uncoiling the Duettos, I began the fun part of the testing process; actually going climbing!

The first thing that you'll noticed when using the Duettos is how skinny they seem. They definitely feel skinny for their 8.4mm and I think seem thinner than some 8.2mm ropes that I have previously owned. This translates into ropes that handle really well whilst clipping. Even when high on a long pitch they still feel really good, without too much in the way of rope drag. Only if you have made some grave errors in your ropework will you experience trouble in this regard. Likewise, belaying with them is smooth and they feed through the device well, though I would definitely recommend using a device that is designed for use with skinny ropes, and (as always!) pay close attention to your leader, especially low down on a pitch.

Falling on the Duettos is as joyful as blowing that long-saved onsight can ever be; with a dynamic elongation of over 31% they are really stretchy, and thus provide a nice soft catch. This gives you an extra bit of confidence when you are pumped and scared but still pushing on after chucking in that questionable runner! On the flip side to this, it is worth being aware of how stretchy these ropes are if you are climbing on shorter routes, or routes with hard, run-out sections lower down. I had a slight brown trouser moment when I felt like I got closer to the floor than I would have liked, having fallen off a route with a tricky run-out close to the ground.

I have not yet climbed as a three with the Duettos, and though it is not something I would be averse to, I would totally understand if some people were uncomfortable seconding on just one of these ropes. However, on occasion whilst leading with them I found myself clipping all my gear on just one rope to minimise drag and I didn't feel uncomfortable with the idea, as I was always assessing the potential for damage from sharp edges.

To begin with I wondered if the high performing, skinny-feeling nature of the Duettos would have a bearing on their durability, meaning that I would be looking for a new pair of ropes sooner than I would like. Their sheath percentage of 44% is a respectable proportion, which contributes to their longevity - though it's worth pointing out that you can find ropes of similar diameter at more like 50%. So far the Duettos have held up well, showing little furring despite several months of being used (and abused) on cliffs up and down the UK, and a long haul trip to Australia. Although I'm sure a pair of thicker ropes would be likely to outlast these, I am happy with their durability to date.

I have been thankful for the dry-treatment on more than one occasion after blindly ignoring a bad forecast and getting caught out. The Duettos dry really quickly, which for someone who has no permanent base for the trad climbing season is really useful, as I can just flake them out on the front seat of my van whilst I'm at work and they are usually dry by the end of the day.

In the Duetto, I feel like I have found the perfect trad climbing half rope for someone such as myself; a mid E-grade climber who enjoys pushing themselves on sea cliffs and mountain crags throughout the UK and indeed further afield. These ropes would also be perfect for winter climbers and those looking to climb big technical mountains, due to their light weight and dry treatment. Although the Duetto would be suitable for most situations, for those who are just starting out or climbers not wishing to push their grade, I would probably recommend getting a chunkier set of ropes that would deal with more abuse and provide more security over sharp edges. But fundamentally I love them, and when this pair does get too worn it is unlikely I'll be wondering what to replace them with - I'll be getting another pair.

Ideal for long, wandering routes, run-outs, ice climbs or sketchy trad leads. A mid-range half rope, the Duetto's 8.4 mm diameter is neither fat nor frighteningly skinny; the smooth, high-twist sheath and unique core allow the Duetto to be durable and easy to handle while reducing drag through gear and over rock. Now available in new DryXP, UIAA Certified Water Repellent.

Weighing only 36g per metre, the GULLY 7.3mm is the lightest double rope on the market.

It offers the perfect compromise between handling and thinness for climbers wanting to progress.

EDELRID are a brand known for their innovation. From the OHM to the new GIGA JUL the catalogue is full of groundbreaking new products. There is one product area however where EDELRID really excel, rope.

A question about twin ropes.

triple vs half ropes

How long do ropes last

What to do with old retired... List more discussions...

My only criticism of the Duetto (which has been my double rope of choice for a few years now) is the absence of a half way marker. Performance-wise I can't really fault them - they feel good, handle nicely, and are a good balance between soft and stern - but at times I just wish there was a mark in the middle. Granted, I could easily have done this myself (Beal produce a rope marker from what I recall), but it clearly hasn't mattered that much, otherwise I'd have done it.

On a final (jealous) note, that's one awesome array of routes you've got done within the review :-)

Well to provide a more balanced review on these ropes. The Duetto's were my third pair of half ropes and were by far the worst (compared with a pair from Elderid and Tendon). They got ruined quite fast compared to others (the speed at which they got furred was quite impressive), they tangled much easier. Additionally, I bought two 60m ropes and they did not have the same length. One was slightly (~2m) bigger, which was very annoying when multi-pitching as the mismatch of the end of the ropes were significant.

Interesting, what rock type have you been using them on?

I'm unsure as to how many hundreds of pitches mine have done, but they've been my sole trad ropes for over two years (two years in which I've done a hell of a lot of trad) and they've still got plenty of life left in them. Compared to other ropes I've used in recent years such as the Mammut Genesis/Phoenix and DMM Migrant/Prophet they've certainly compared very favourably. That said, I haven't used the latest offerings from Edelrid or Tendon, so can't really pass comment on that front.

Mostly granite, but also quite a bit on limestone and gneiss

I am quite sure I do not abuse my ropes as much as you as most of my trad is done usually only in the summer! That is why it is even more impressive the speed at which they got trashed.

mikenty
12 May, 2018
It might just be me but the climber in the picture of Golden Mile appears to have 3 legs?
More Comments
Add Comment

With a versatile triple rating and fantastic handling, the Swift is a great route for long sport pitches and alpine north faces alike; but it is the environmentally-aware production that really sets this rope apart, says Rob Greenwood.

The Beal Cobra is an all round rope that can be used for trad, winter and alpine. These mid-weight ropes are ideal for anyone who wants...