Share
Reviewed by Charlie Boscoe 24th August, 2012
This has been read 23,310 times
Price: £89.95Brands: Red Chili
Share
We receive free products for review from brands, many of whom advertise on the site. We work on strict condition of editorial independence, and no guarantee of endorsement
Charlie Boscoe reviews the VCR version of the Red Chili Habanero. You can read Viv Scott's review of the lace-up Habanero here. Also see this news item: New Red Chili Shoes 2012.

Red Chili say: "Built with Chili's proven three strap closure system it's awesomely adjustable and fits fast and firm. Softer, but still precise, there's an instant, 'out of the box' performance and features that will be appreciated maybe most by the boulderer. So with tough, tear resistant bottom straps, a tight slingshot heel, plus sticky, contoured toe patches we know it'll come out fighting where-ever its hooked, scrubbed or cammed."

As soon as the Habaneros emerged from their packaging, it was obvious Red Chili's claim there would be 'out of the box' performance was going to be spot on. The initial impression of these shoes was just how sturdy they feel, and after several months of use I still can't imagine wearing them out. I also thought that they would be most appealing to boulderers or sport climbers, being pretty firm and having a thick sole with pronounced edges. Although they are obviously suited to some types of climbing more than others, as all rock shoes are, I tried them out on plenty of different routes and rock types.

I've got pretty narrow feet and found the Habaneros a comfy fit, albeit slightly pinched around the toes (although to be fair this improved performance, particularly on steep terrain). They are especially snug around the heel, and generally they give the impression that your foot is being made to fit the shoe, giving you precision back in return, rather than the shoe flopping around whatever shape of foot goes into it. The foam underneath the laces adds comfort, but overall I thought that the Habaneros were comfy and precise for a couple of pitches, but then my feet needed a break. Over time they have softened up slightly over the top of the shoe, but retained their stiffness in the sole. Ideal for cragging and short multi pitch routes in other words, but not a shoe to wear all day on a long route.

This is where the Habaneros really come into their own. The thick, solid sole makes any flat, positive hold feel like a ledge, no matter how small it is. The pointed toe box also means that if there are any pockets, the Habaneros are excellent at making the most of what little rock you can make contact with. I wore the Habaneros for several trips to steep limestone routes and they were superb - the stiffness of the sole meaning that they stayed that way too, despite plenty of use.

Unfortunately every shoe has a weakness and this is the Habaneros'. The stiffness of the sole means that when climbing slabs, you don't get nearly as much purchase as you do from a soft, sloppy boot. I climbed quite a few slab pitches in them and generally the Habaneros felt insecure and slippery. Just to check this out I reclimbed a few routes that I'd done in my old boots and these felt harder and less secure. Still, slabs aren't really what this boot are designed for, so I shouldn't be too critical.

I took the Habaneros on a few Chamonix cracks and thought they were great, meaning that they would almost certainly be great for gritstone cracks too. Soft, flimsy boots are not a good idea for wide cracks, so the stiffness and solidity of the Habaneros meant that I could kick them in, almost like a crampon, and stand up securely and without any pain from having my feet squeezed. A meaty boot for meaty cracks!

The Habaneros performed really well on anything overhanging, with the pointed toe being particularly good for keeping feet on when things got steep. Occasionally they'd pop off when I was trying to keep my foot on something tiny and rounded, but I suspect that the old saying about workmen and tools might apply here.

A real strong point. The Habaneros are so solid and well built that after plenty of use, they are showing pretty minimal signs of wear. The rubber is virtually intact and the soft, fabric on the upper part of the shoe has softened nicely but this has only made them more comfortable, not floppy.

A great shoe for anything steep and edgy, and a really good option for bouldering too. If you need an all rounder then these probably aren't the boot for you, but if want something for pushing your grade at the crag, the wall or on the local boulders, then look no further.

Charlie Boscoe is a skier and climber based in Chamonix, France. In between running his successful blog on Chamonix climbing conditions he also heads up expeditions and has recently lead a group up Kilimanjaro, Africa's highest mountain. You could say he has started the 'Seven Summits'. He likes Rugby, but we don't hold that against him too much. 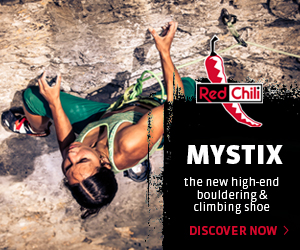 Red Chili have released a number of new products throughout 2021, but here's a quick overview of some of the highlights - all of which are in store and available to order now.

Jon Wickham
24 Aug, 2012
Good review, but I think you've got the photo of the wrong shoe at the bottom of the article!
Sarah Stirling
25 Aug, 2012
Thanks Jon, now changed, S
Add Comment
Please support the following outdoor retailers who support UKClimbing.com: