Johnny Dawes - Full of Myself Review

Not since America waited on the quayside to learn the fate of Little Nell in the final instalment of The Old Curiosity Shop has there been quite the same sense of literary anticipation. Okay, I exaggerate. Climbing is more Royston Vasey than New York. But Johnny Dawes is without doubt its most striking old curiosity, and his memoirs have sparked genuine excitement.

His ascent in 1986 of Indian Face was one of the great moments in the history of British rock climbing. Indian Face wasn't just an exceptional new route, it seemed also a kind of statement. History, the blank challenge of the wall and Dawes' genius conspired to produce a kind of mortally dangerous performance art. Although he had top-roped it beforehand, the scale of risk was gut-wrenching.

More than that, the stories of madcap adventure that swirled around him added an extra frisson to his reputation. For the generation that came before him, he was the natural inheritor of the wild creativity they saw being eroded by the new emphasis on training and commercialism that arrived in the 1980s. For the generation that came after, his gritstone wizardry helped spark the end-of-century bonfire of the few hard lines that remained in the Peak.

Some regard Stone Monkey, the documentary he made with Alun Hughes, the best climbing film ever. In recent years, a kind of new-age, coaching guru Dawes has emerged, the product of years spent burrowing into himself using various philosophies and therapies – Tibetan Buddhism, Primal Scream therapy and so forth – to emerge, it seems, free of at least some of the demons that plagued him and, quite often, his friends too.

News that his memoirs were about to be published has been a rumour for several years, so much so that those less persuaded of his genius would roll their eyes when the subject came up. Regulars at the Caban café in North Wales knew differently. Holed up in a caravan, Dawes was wandering patiently through the orchard of his imagination and sharing the results with the Caban's clientele to test his wares. So were all those interrupted morning coffees worth it?

Before I answer the question, I should explain that I've known Dawes for a long time, thirty years in fact, and that we were at school together. For a year or so, after his brother Mike, also a talented climber, had left, and while Johnny was doing his A-levels, we hung out together. Or rather, I followed him round the sequence of desperately hard problems he put up on various school buildings, just to watch.

Even as a novice, I could see that here was someone completely different. As George Smith says in his thoughtful introduction: 'If you ever saw Johnny Dawes in his prime, you never forgot what you saw.' It wasn't his raw ambition, his determination and muscular power that set him apart, it was his sense of timing. His climbing seemed choreographed rather than constructed in a gym. If there's perfect pitch for movement, he has it.

You can imagine how his streak of challenging insolence went down at an English public school. Convinced of his own brilliance, and with a mind that conceived the world differently to contemporaries heading for the City or the Army, he was bullied quite badly. (He could dish it out too, when he was young.) I knew this, but hadn't realised how much it shaped his future. He really did feel he had something to prove.

Nor had I quite processed the money thing. There were quite a lot of loaded people around the place, but not many headed home to such a plush address, or a family with the means to indulge a passion for racing cars. With a trust fund in his back pocket, blowing off a degree in favour of Llanberis bohemia must have seemed an easy choice. But I wonder what his working-class, in fact, even his middle-class contemporaries in Pete's Eats thought about it all. Like Jarvis Cocker said, everybody hates a tourist.

This first part of his life is told with real energy and a lightness of touch. It's funny too, and self-deprecating. What I most remember from school was his freewheeling imagination, the bizarre links he made – the mercurial flights of 'Ooh, I fancy that!' There was his portfolio too, his exercise book filled with unclimbed lines, embroidered with doodles, some of which are cleverly reproduced here. More evidence of the artistry he brought to climbing.

His writing can be quirky, convoluted and often obscure, but this is Dawes we're talking about here, so you'd expect that. Think aspirant Heston Blumenthal rather than Pizza Express. Most obvious, as an example, is the short chapter he writes about rescuing a bee, which is sweetly brilliant, but the book is studded with similar jewels, like his description of slate as 'squeeze-cooked mud... gravity's fine bone china. It shows you that gravity is a mystery, its handiwork no less so.'

Where the book sags is in the middle, during his halcyon days in the Peak and North Wales. Some of the descriptions of climbing seem to me early Dawes, dense and obtuse, and I found myself skipping through them. The pen portraits of his famous friends are too sketchy. It's all too episodic, without the narrative arc he found so easily in the first part of the book. There's a reworked version of his essay on Indian Face, but unforgivably nothing on the aftermath of this life-changing event. It made him famous, gave him what he thought he wanted, but none of this is explored at all. What's it like to achieve your life's dream at 22? What's it like when the money runs out?

The chapter on Strone Ulladale is good, but I was quite relieved when he picked up the threads again of his long journey to understand finally what drives him, and why he had suffered years of depression. None of this is done with any self-pity, and is quietly inspiring, as he sets out – post trust fund – from London on his push bike to visit a Buddhist sanctuary in the south of France for some meditation – and finds himself sitting next to John Cleese.

Johnny Dawes being interviewed in the Peak District. Johnny acted as a guide to the Mammut team.
© Visual Impact | Rainer Eder

There are adventures in Los Angeles, where he gets to know Frank Zappa's widow, the perfect person to attempt to understand him, some cut-price motor-racing yarns, quite a few semi-boastful sexual encounters, although nothing too graphic thank goodness, since that really would have been too much, and a few swipes at other celebrities – Ron Fawcett, unfairly I think, Joe Simpson, the odd bitch about Jerry and Ben spending too much time in the gym. The overall effect is of a phantasmagorical scrapbook, something to pore over as much as read at once.

I can understand why he decided to self-publish, given his stated resentment about his image being ripped off in the past, but it's a hard act to manage, and he doesn't quite succeed. The paragraphs are separated by a space, which gave me brain fever after a while, and there are some unforgivable spelling errors, particularly the names of several foreign climbers. But it's well illustrated and richly captioned, and I should just be grateful that those close to him got the thing out at all.

It's an important book, I think. Although you need a working knowledge of 1980s rock climbing history to grasp fully what's going on, it's a useful reminder that the best of climbing is creative as well as athletic. Perhaps, in later life, all that imaginative juice will be expended on some other form of art, but whatever happens, the lines he marked on cliffs are extraordinary things – quite a collection.

Mark Pretty captures it best in his blurb for the book: 'To watch him climb was something special, so special that some dismissed it as an oddity. Don't be fooled. The term great is rarely bestowed on anyone in climbing but Johnny is one of the greats.'

You can buy a copy of the book on Johnny's website: johnnydawes.com

Ed Douglas is a traveller, writer and mountaineer. His first book, about Everest, Chomolungma Sings The Blues, was published in 1997. Other books include Regions of the Heart, a biography of mountaineer Alison Hargreaves, who disappeared returning from the summit of K2 in 1995, and the first full-length biography of Tenzing Norgay, who climbed Everest with Sir Edmund Hillary in 1953, published by National Geographic in 2003. He wrote with Ron Fawcett, Ron Fawcett, Rock Athlete which has been shortlisted for this years Boardman Tasker Prize. He was founder and editor of On The Edge magazine and Mountain Review, and writes for the outdoor press and the Guardian newspaper. A former editor of the Alpine Journal, Ed is an enthusiastic climber, with winter ascents in the Alps and Himalayas. You can read more on his blog Calm & Fearless.

You can catch Johnny at the Kendal Film Festival:

FULL OF MYSELF - Sunday 20 September 12:00 to 13:15 - buy tickets
Johnny Dawes brought E8 to Britain and was an outstandingly elegant and forceful climber creating some of the great lines of the 90s. To do this he became of master of the 'Head Game' and learnt to deal with the complete lack of 'margin of error' that this involved. He's now got around to writing his autobiography – Full of Myself. In a special presentation - followed by a question and answer session hosted by Julie Summers - he'll talk about both his new book and past and continuing adventures, to give a profound insight into what it's really like to be a climber at the cutting edge.

HOW TO BOOK TICKETS

Easily accessible from the M6 and by train and there are plenty of accommodation options in and around the town but you need to be on your toes as they fill up very quickly over the Mountain Festival weekend.

For all your questions, accommodation and travel needs go to www.golakes.co.uk here you will find all the information you should need for your visit to Cumbria, alternatively call the accommodation booking line on 0845 450 1199. More news about Kendal Mountain Festival 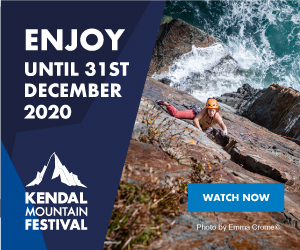 Clare Sheridan has been a leading Irish climber for decades, coming of age in an era when girls, they were told, ought not to climb. If you're looking for a climbing role model, says Hilary Sharp, look no...

The Great Sea Cliffs of Scotland

This immense volume does full justice to the rich history and sky high quality of one of the world's great rock climbing destinations, says Rob Greenwood.

Never Leave the Dog Behind: Our love of dogs and mountains

Helen Mort, the multi-award-winning poet and author of Division Street and Black Car Burning, is offering you a unique opportunity to have a photo of you and your dog printed in her new book, Never Leave the Dog...

Hospitals are not Full

Johnny Depp vs The Sun

How full is my wall?