Chapman repeats Walk away, 8B

Share
Björn Pohl UKC 10th February, 2009
This has been read 2,269 times
Share
UK Climbing reports Greg Chapman has made the first repeat of John Gaskin's Walk away, 8B, at Fairy steps, Lake district, UK. John made

the FA in 2001, and added the more famous sit down start, 8C, two years later. Unlike many high end problems, Walk away is vertical, and as you can see on the photo, the holds are miniscule to non-existent. Infact, as the story goes, Stevie Mac once went to Fairy steps to have a play at the problem, but struggled to find any holds...

Greg comments: "I had to use a different sequence to John's original high step method - I could get my foot up, but couldn't move. My sequence dyno's (thanks to Chris Davies for sewing that seed) the move from the crozzley ?crumpet? hold (left hand), a small two finger crimp (right hand) and goodish but 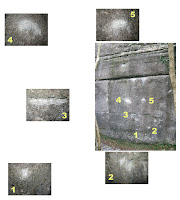 inconveniently placed/angled foothold. Still felt pretty hard and I think I was lucky that the move suited me, this is certainly not my usual level of climbing and as such I have no idea of what the grade would be for my sequence... it's at least English 6c."
The stand up starts on hold 4 & 5, and the sit down on holds 1 & 2.
Photos by UK Climbing