Elder Statesman and a ground fall for Michele Caminati

Visiting Italian climber Michele Caminati climbed Elder Statesman at  Curbar Edge on Monday 27th March. The following day, Michele went back on the route for photographs after top roping it again twice. Unfortunately, he fell from the crux and the resulting fall severed his rope, causing him to hit the ground. A neighbouring climbing group which included a paramedic arrived to offer help and The Edale Mountain Rescue Team were on the scene shortly after, who got him to the Northern General Hospital in Sheffield.

Michele suffered a badly broken wrist and a broken heel, and is currently recovering in hospital. His belayer suffered a concussion but was discharged on the same night. Michele is no stranger to hard gritstone routes and boulder problems, having made several trips to the UK in the past.

Commenting on the accident Michele said: "I went up in the European style, with only one 10mm rope and without a helmet. This time I fell off the crux and the rope, whilst getting tense shore off against the corner. I thought I would have been safe. Perhaps I could have used the half ropes but the outcome could have been the same."

John Allen who was at the scene described a moment when Michele expressed his concern about having a lack of insurance, to which one of the Mountain Rescue team replied "don't worry, mate, you're in England."

Michele would like to thank Edale Mountain Rescue and the emergency services for their rapid response to the incident and professionalism in treating him following the accident.

Michele has expressed a wish to share the below footage so other climbers are aware of the potential risks of climbing this route and the dangers of rope shearing.

UKClimbing would like to wish Michele a speedy recovery and hope to see him out on the grit again soon.

Born in Parma in 1985 I grew up as a climber travelling around the world to fulfill my passion, being it competitions or outdoor climbing. During my career I've become Italian boulder champion, won the Italian...

In this video from Clément Perotti we get to watch Michele Caminati battle his way up Daniel Woods' El Corazon, 8B, at Rocklands, SA.

This week's Friday Nighter is a couple of videos of Italian climber Michele Caminati. Michele has been visiting the gritstone, and has repeated many hard routes and boulder problems... 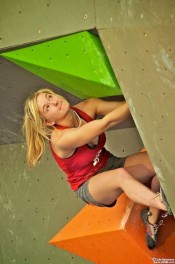 Greasy Prusiks
30 Mar, 2017
Bloody hell that was unlucky. Best of luck for a speedy recovery.
Owen W-G
30 Mar, 2017
Get well soon. Amazing footage.
Timmd
30 Mar, 2017
Yes it is. I'd probably never have thought of that happen to a rope like that. My own broken wrist and fractured heel recovered okay, and a friend's broken heel did. Hopefully he'll be as fortunate.
captain paranoia
30 Mar, 2017
"don’t worry, mate, you’re in England" Looks very unlucky to have the rope cut like that. Best wishes for a good recovery.
FactorXXX
30 Mar, 2017
Looks very unlucky to have the rope cut like that. McClure used three ropes on the first ascent due to the fear of the rope dragging down the arête in the event of a fall: -https://www.youtube.com/watch?v=QDTAKVUE_g4 Hope Michele Camanati recovers quickly and credos for releasing the video!
More Comments
Add Comment
Loading Notifications...
Facebook Twitter Copy Email LinkedIn Pinterest