The finals of all three individual disciplines and the Combined finals at the 2019 IFSC World Championships in Hachioji, Japan will be livestreamed on BBC Sport online as one of fourteen deals for live or delayed-as-live broadcasting from the event secured by the IFSC. This is the highest broadcasting reach of any Sport Climbing event in history. Shauna Coxsey and Nathan Phillips will both be representing Great Britain in the boulder semi-finals tomorrow, having qualified in 15th and 13th respectively.

The Women's boulder final starts tomorrow (13th August) at 08:45 GMT and the men's is at midday 12:00 GMT. Stay tuned for reminders of the lead, speed and Combined finals later in the week (see the event schedule).

In the meantime, though, cheer on GB Climbing Team members Shauna Coxsey and Nathan Phillips as they compete in the boulder semi-finals, which won't be streamed on BBC Sport but will be available to watch as usual on the IFSC Climbing Youtube Channel both live and afterwards as a replay (you can also watch the finals on the IFSC channel as usual, as well as on the BBC). From today onwards, qualification rounds in all disciplines will be livestreamed on the event website without commentary due to popular demand.

Read more
Adam Ondra (CZE) and Yoshiyuki Ogata (JPN) led men's qualification in their respective groups (the field is split in half due to the high number of competitors; top 10 from each group make up the semi-final 20) and Janja Garnbret (SLO) and Akiyo Noguchi (JPN) came out on top in the women's event.

Surprise results in the boulder qualification round included Olympic hopefuls and Jessica Pilz (AUT), Julia Chanourdie (FRA) missing out on semi-finals. In the men's event, all 7 Japanese athletes made it through to the next round in the top 20, taking up nearly half the semi-final field. Since positions are multiplied to create a Combined ranking for the Combined finals, competitors will be aiming to place as high as possible across all three disciplines for a chance to compete in the finals and make the top 7 for possible Tokyo 2020 Olympic selection. For more information on how Olympic selection works, read our article.

Shauna Coxsey has qualified in 1st place for finals on Tuesday after the Combined qualification round. In an exciting twist, due to the fact that Japan has 4 athletes qualified for the Combined final but can only take 2 Olympic spots, all 4 ath... 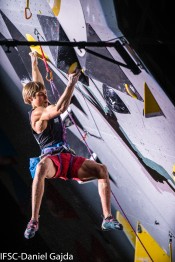