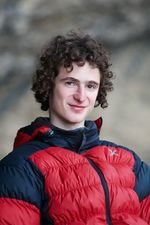 So far he has 3 gold medals from World Championships

In 2012 he climbed Change, the first route to receive a proposed grade of 9b+ (5.15c). To date, only Adam and Chris Sharma have climbed a route of this grade. Adam has redpointed three routes at this grade.

He was the first person to establish a route at the grade of 9c when he climbed Silence at Flatanger, Norway.

So far, Adam has climbed thousands of routes, 140 at the grade of 9a and higher.

In 2016 Adam repeated the legendary Dawn Wall in a record time of 8 days. It was his first serious big wall experience.

Adam is currently the only climber to have climbed a route with the proposed grade of 9c, with his ascent of Change in 2017.

Montura
View the reviews and news from Adam's sponsors.

IFSC commentator Charlie Boscoe puts down his headset and reports on the IFSC Lead and Speed World Cup in Xiamen, China...

This week's Friday Night Video follows the world's best rock climber: Adam Ondra. The Reel Rock film Age of Ondra follows Adam as he attempts to redpoint his 9c route Silence, tries to onsight a 9a+ and climb Canada's hardest route in a day. Throughout the film, we...

Late last month, Adam Ondra repeated a route that was first climbed in 1996 and had seen no second ascent. The line in...

The World Championships in Hachioji took place last month and it was the first opportunity that climbers had to qualify for the...

It was an exciting weekend in Chamonix at the 2nd round of the IFSC Lead World Cup - especially for the GB Team....

News 3rd Ascent of Neanderthal (9b) for Adam Ondra

Interview Adam Ondra about his flash of Supercrackinette, 9a+

Video Adam Ondra making the FA of Mamichula, 9b

Video What Has Ondra Ever Done On Grit? 3 E7 Onsights!

Video 9a's by Ondra and Gelmanov

News
8B flashes by Ondra

News
Two 8c onsights in one day by Ondra

News Ondra on 9a+'s and more

News
9a+ and 8c onsight by Ondra

News The secret of Ondra's success

News Another F9a for Ondra

Modern front-mounted headtorches are neat and lightweight, yet pack enough power for most needs. Here we look in depth at five alternatives across the price spectrum.

Martin McKenna was a fan of the previous version of the Camalot, so how does he rate the recent updates?

From the tough, stretchy Forged Denim Pants to a light softshell jacket, Kate Dean puts a selection of Black Diamond's...

Whether you're approaching a mountain crag or out on a scramble or via ferrata, an approach shoe will be lighter and more nimble than a boot,...

It's a big, cold world out there, and Black Diamond has got you covered. Through the same commitment to innovation and technology found in our shell-layers, BD delivers a comprehensive insulation collection built to withstand the rigors of life. I...

We're just back from the annual summer gear-fest that is the OutDoor trade show. As Europe sweltered in the heat the world's outdoor industry gathered in Munich to network, drink beer and showcase their shiny new stuff. For us it's a great opportunity...

We're just back from the annual summer gear-fest that is the OutDoor trade show. As Europe sweltered in the heat the world's outdoor industry gathered in Munich to network, drink beer and showcase their shiny new stuff. For us it's a great...

With features designed for climbing, and style for everything else, our sportswear...

Climbing protection has been a hallmark of BD innovation since the days of the original Hexentric® chocks that helped spawn...

QC LAB: Twisty Ropes - the How, Why and Risks

The dreaded twisty rope is the bane of every climber's existence. Not only is it super annoying to have a...

The Bushido II is a super light, extra grippy and aggressive shoe designed to ensure perfect stability and support on all types of...