This video is blocked because you have disabled Social Media cookies
Please enable them to view the content
Share
© Dark Sky Media 1st December, 2017
401 views
#Fri Night Vid
Brands: Mountain Equipment, Petzl, La Sportiva
Share
In the midst of the seasonal shift, Between The Seasons documents Natalie Berry's recent move to Chamonix, and her desire to seek out new lines as the temperature starts to drop.
Buy Now from... 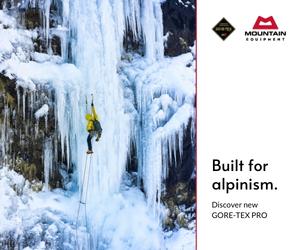 This video is featured in the following playlists

john arran
2 Dec, 2017
Did you enjoy watching it?
olddirtydoggy
2 Dec, 2017
I don't have any issue with Nat Berry getting paid or the vid getting posted on here. Did I enjoy the film? Didn't really care for it but good for her if she's getting a kick out of climbing rock and living whatever life she chooses. There has been some great vids via the front page, especially the Dave Linnet stuff but I guess not every week somebody of his calibre is putting stuff out. His latest Johnny Dawes vid was wonderful. We've battered the sponsorship thing to death here. Who cares? I'll still go climbing regardless of who gets paid what or endorses blah blah blah.
john arran
2 Dec, 2017
The point may well remain, but surely the greater point is that you were treated to a video you enjoyed, at no cost to you. Whatever the motivation behind it may or may not have been, isn't that a good thing?
john arran
2 Dec, 2017
Well that's the acid test as to whether the sponsorship is acceptable. Earlier on you said you enjoyed it, which suggests it was worth it. Maybe now you're recanting a little? Would you have preferred not to have watched it at all? I agree that some vids are so commercial as to be a waste of time and effort; not sure I'd say this was one of them though.
Chris Craggs
2 Dec, 2017
I watched it on the strength of your comments, I'm not normally fussed about bouldering vids. A pleasant little film, I really can't see where you are coming from, she is using a mat and shoes, and wearing some clothes! Do you think the logos should have been hidden? Chris
More Comments
Add Comment
Loading Notifications...
Facebook Twitter Copy Email LinkedIn Pinterest