So You Want to Go Deep Water Soloing?

Share
Mike Robertson 21st June, 2007
This has been read 96,749 times
Share
So you want to go deep water soloing? It's not a bad idea! But let's start at the very beginning: How did deep water soloing (DWS) come about?

I'll stick my neck out here: DWS came to be because it's the purest form of climbing. Let me clarify this: I mean climbing as in fingertips-on-rock, as in aesthetics of movement, as in unencumbered, as in FREE. You won't get the same feeling from dragging a full rack and two ropes up a classic trad pitch, and you won't find the same experience on a hard sport route, with a harness and rope always to hand.

So we do it because it's fun, it's simple, and it's unencumbered. The next question is where?

DWS involves climbing on rock that has been developed in one of three ways. Here's the gen, and with examples:

Traditional cliffs. These includes venues such as Conner Cove in Dorset, and Berry Head in Devon. The routes at these venues were first developed as traditional routes; even the traverses were first climbed with ropes and gear! The routes then fell prey to the deep water soloists...

Sport cliffs. The most famous example of this is Dorset's Lulworth Cove, which was developed as a sport crag in the early nineties. It has since lost just about all of its 'roped attention'!

DWS cliffs. A look at the routes and the history of Cave Hole, down on the Dorset Isle of Portland, tells us that this superb area was mostly developed as a solo cliff, ie. just about all the routes here were first climbed without ropes. Pembroke's Barrel Zawn is another great example of this.

So how do I get started with DWS?

It won't cost a lot to get going with DWS! You'll need a selection of rock shoes (three pairs should be enough), a slightly larger selection of chalk bags (say half a dozen), and a short rope and a little gear to set up the occasional abseil or safety/exit rope. Add to this a few pairs of shorts and T-shirts - and a camera, of course.

What else do I need to know?

There's slightly more to DWS than just jumping on a route. Here's a short list of the things you'll need to think about before you put your rock shoes on:

Get familiar with your venue. Know the height, the top-outs, the depth of the water, even the height of the crux, if possible. Always know your shortest/fastest exit from the water, especially in early season, when the water's cooler.

Get a tide timetable, and get well acquainted with it! Tides are your key to DWS, so get familiar with EVERY aspect of them – their timing, their (mood) swings, and their variations from venue to venue. For on-line tide information, go to http://news.bbc.co.uk/weather/coast_and_sea/tide_tables/

The art of falling. Some practice jumping will get you acquainted with your 'entries', but always start these from low down... You'll need to learn how to hit the water with reasonable finesse – this art becomes more important as you venture higher.

Go to the crag in a group, and climb within sight of other folk. Also important is someone who can jump in at short notice; a bad fall might result in need of a little assistance. Also bear in mind that being a strong/confident swimmer will assist you greatly – it's true to say that weak swimmers have less confidence when deep water soloing. With this in mind, you might consider a boat of some sort at the crag – these are fun, and provide a little additional safety – even a basic inflatable kiddy boat will give good value!

Here's four venues that offer the DWS beginner with enough water and accessible routes to get started.

Mike Robertson is the author of the new Rockfax guidebook, Deep Water. Mike was one of the first climbers to ditch the rope and security of traditional protection and rely upon the safety-net of the sea. Areas covered in this guidebook include: Swanage, Lulworth, Portland, Devon, Cornwall, Pembroke, North Wales, Scotland, Portugal, Costa Blanca, Mallorca, Sardinia, Croatia, Thailand, Vietnam and Tasmania.

The routes in the guidebook are described in full and are attributed Sport Grades in conjunction with the now accepted S-grade that gives an indication of the climb's seriousness, with regard to height above the water, and tide considerations. The difficulty of the routes included spans all grades, ranging from dreamy grade 4s, 5s and 6s above the warm waters of Asia and the Mediterranean to many hard grade 7s and 8s, some above the less-tepid seas of Northern Europe and the Southern Ocean.

All areas are covered by colour photodiagrams and the book is enticingly illustrated with many stunning action photographs, the majority taken by Mike Robertson.

Mike has climbed worldwide and in Dorset for over 20 years. He is a professional outdoor photo-journalist.

Other DWS Media and Resources

See some DWS photos at UKClimbing.com here and here, including the gallery of Dr. Evil's, here

Also check out dwsworld.com, a web site dedicated to the art of Deep Water Soloing. 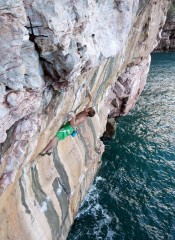 The Last Ice Man of Chimborazo

Where's Your Head At? Keep Mental Health in Check Post-Lockdown

Paz
22 Jun, 2007
I want to know how to avoid salt water enemas, and perforating an ear drum (again). Where's Barrel Zawn too?
Wingnut
22 Jun, 2007
. . . and how to avoid landing on jellyfish, how to ensure that your glasses float, and most importantly . . . how to stop your arse looking fat in a bikini! ::oD
Lego
22 Jun, 2007
I love DWS, but does anyone else feel a bit sad about corporations jumping on the bandwagon? It's just too much fun... <sigh>
Michael Ryan
22 Jun, 2007
Which corporations are those: BP, Eron, Burger King, Donald Trump?
Paz
22 Jun, 2007
Red Bull, Wild Country, and now Rockfax too.
More Comments
Add Comment
Loading Notifications...
Facebook Twitter Copy Email LinkedIn Pinterest