Q. Jerzy Kukuczka was the second person to climb all fourteen 8000m peaks, after Reinhold Messner. On which summit did Kukuczka complete his set in 1987?

The answer is: Shisha Pangma

The winners are: Will Riseley from Ashford, Ally Smith from Chester and Didka from Wojkowice Koscielne, Poland.

Winner of the 2011 Boardman Tasker Prize, and the Grand Prize at the 2011 Banff Mountain Book Festival, Freedom Climbers by Bernadette McDonald is the story of Poland's extraordinary high altitude mountaineers, who emerged from the oppression of the Second World War to become perhaps the world's greatest ever Himalayan climbers.

We have three copies of Freedom Climbers up for grabs in this Vertebrate Publishing competition.

All entries in by Friday 9th March. The winners will be announced on Monday 12th March.

Reading Between the Lines - Bernadette McDonald 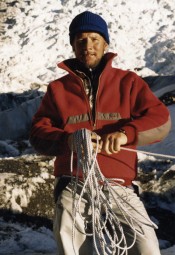