Share
Björn Pohl UKC 9th January, 2009
This has been read 1,832 times
Share
As most of you no doubt know already, Kevin Jorgeson has made the first ascent of Ambrosia, on the Grandpa peabody boulder in the Buttermilks, thereby, to quote Josh Lowell of BigUp, stepping into another realm.
Brilliant effort!
And also very confusing... Because wha

t exactly is Ambrosia? How should we define it?
I 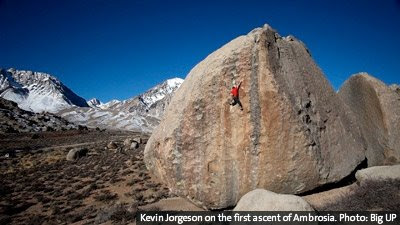 know, I know... It's a climb, let's leave it at that! Trying to define it by attaching some kind of arbitrary number to it won't do it justice anyway. Of course, it's up to Kevin to define it, but let's take a look at the facts anyway. Ambrosia is a ~14m/45' overhanging climb. It starts with an 8A+/V12 boulder problem ending at a shallow hueco at about mid height. From here, Kevin describes it as a 13a/7c+ solo to the top.
By the looks of it, this would make it comparable to Blind vision, Adrian Berry's route at Froggat, UK. This route start with the Jerry Moffat highball Slingshot, ~8A, taking you to a no-hands rest at a ledge. From here, it's a technical 7c+ to the top at about 15m/50'. In terms of numbers, this route was originally given E10 7b (7b being the UK techgrade Moffat gave the first move), but it has since been downgraded by Dave MacLeod, who found it somewhat easier. I don't think he ever offered a grade suggestion for the whole thing, only saying it's a 7C+/8A followed by an E8 6c, but I'm guessing this would mean E9 7a.
Anyway, with this in mind, I think we can safely assume Ambrosia is a bit harder than that as it has a slightly harder boulder problem at the start, is more sustained and lacks(?) protection.
A question: When does a higball become a free solo?
Photo courtesy of BigUP productions
Share: