Adam Watson climbs into Purgatory, E8 7b, Back Bowden

Adam Watson has recently climbed a major new-route at Back Bowden, after 5 years of effort. Adam has named the line Purgatory, and given it the grade of E8 7b. It climbs leftwards from Lost Cause, E4 6b, up the blunt arete to the right of Transcendence, E8 6c.

The line was originally tried by Mark Savage who managed to climb the route on top-rope but before he was ready to lead the route, a friend of his had a play and broke an edge, after which Mark could never do the move despite climbing around 8A+ at the time, so he left it for the next generation.

Then, 5 years ago, Adam Watson began to show an interest in the line and Mark, having known both the route and Adam for a long time, began accompanying him to the crag when he went to try it. Mark spoke further on his blog:

"I felt a real sense of satisfaction knowing that it was him was who working it. I never had any doubt that he would eventually climb it. Not only is he strong and bold (he's got a string of E8 ticks) but, despite his easy going manner, he is focused and determined."

Talking about why he began trying the line Adam said:

"The line and the difficulty where the main things that attracted me to it and brought me back year after year. Plus, it's my style and really close to my limit, just what I was (and always am) looking for."

Purgatory starts up Lost Cause then, after placing the cluster of gear, it breaks out leftwards taking in some very bouldery climbing to top out just right of Transcendance. Adam commented on the difficulty of the climbing:

"The route is built up of 7 long moves so it's more like a boulder problem above gear. The crux consists of 3 moves and I reckon they go at Font 8A+. I first tried the route when I was 18 which is about 5 years ago. It seemed like an obvious line and was surprised when I heard no one had climbed it. I quickly realised why it was still a first ascent."

As Adam became ready to lead the route, conditions and life began to get in the way, with work, weather or a lack of partners preventing him from going and leading the route. It all came together in the end though, as Adam describes:

"The day I did it was cold and I managed to top rope it first try so had no excuse other then to go for the lead. The landing isn't too bad and if you fall from low you'll be fine. The wall is so steep, and it has a nasty slab underneath, so the higher you climb the more the fall will hurt, but I luckily never had to test the landing!"

Here is the video of Adam making the first ascent:


Adam Watson is sponsored by: Climb Newcastle and Scarpa

Many thanks to Mark Savage for supplying the images of Adam on Purgatory. Check out his blog HERE 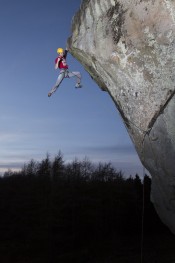 Second Ascent of Purgatory E8 7b by David Murray

GDes
24 Jan, 2014
Brilliant effort. Thats such a good line, always used to admire it when doing lost cause. Well done Adam. That must make it up there with the hardest routes at Back Bowden?
Tyler
24 Jan, 2014
That looks awesome! Is the hard climbing all over at the point where the photos are taken because it must be getting close to deck out zone around there?
Andy Farnell
24 Jan, 2014
So, it's Font 8B in a position to possibly hurt yourself and given Northumberland E8. What would it get on the Moors...? ;) Andy F
Fishmate
24 Jan, 2014
Looks amazing! Excuse my trad ignorance, however, can I assume that it gets the tech 7b in the transition between both routes, given that tech is generally used as acknowledgement of the hardest move? Or does a similar principal apply as with bouldering where they, for example, add the 2 V no's, halve it and add 2?
ro8x
24 Jan, 2014
E11, definitely!
More Comments
Add Comment
Loading Notifications...
Facebook Twitter Copy Email