Alex Waterhouse has made the second ascent of Tom Randall's The Kraken V13, a massive 40 ft-long horizontal roof crack at Hartland Quay. Initially named the Devon Roof Project, the line is considered by crack connoisseur Tom to be a contender for the hardest crack boulder problem in the world.

Yesterday I was lucky enough to make the second ascent of the @tompaulrandall mega line The Kraken, suggested by him as the hardest crack boulder in the world. 🐙 Centered around a large move to a gnarly backhand mono and testing a full set of jams from fingers to fists, this 40ft roof crack was an incredibly intimidating prospect. Having never climbed an outdoor crack before, I had a lot to learn in order to subdue this beast. I spent many hours sitting in the cave reading @petewhittaker01's new book, studying how to make jams marginally smaller or larger and on a ladder contorting my hands into every possible position to find jams that felt usable. It seemed to me that each jam had its own personality, no two felt the same and tiny changes in the position of my hand or the angle my arm could result in a massive difference in how secure it felt. In the end it all came together much quicker than I expected (though with more bloodshed than anticipated), at the end of my third session. This process has certainly piqued my interest though, and I'd be psyched to see how far I can push myself in this unique discipline. Any suggestions for the crack climb life list? #crackisback @tchplymouth

'The Kraken first made my list when Tom Randall made the first ascent in 2016. That was the year I moved to the US to start university, so I never got to try it. It's been in the back of my mind ever since. I got back from the US last year, but have been focussing on training for competitions and have not had many opportunities to get on rock.'

Despite being limited to a comparatively one-dimensional home board during lockdown, Alex surprised himself with a quick tick in just three sessions. With the IFSC competition season looking uncertain due to postponements and cancellations, Alex turned his attention to rock projects close to home near Plymouth.

'When we went into lockdown, I built a board in my back garden and have been trying my best to train at my usual level, but with the prospect of a significant amount of time before comps return I was finding it hard to maintain the psyche. With lockdown easing and missing complex climbing movement (there's only so far board climbing can go…) it seemed the perfect time to work my way though some of the local classics that I've neglected.'

After lockdown eased, Alex went to try James Squire's Floodgate 8B at Hartland Quay. After making what he believes is the second ascent of that boulder, he spent a little while looking at The Kraken, which leads through the roof of the same cave. Alex explained:

'I came back a few days later armed with a ladder, two pads and Pete Whittaker's Crack Climbing book. I made my first tape glove and spent a few hours working the moves one by one. I managed most of the moves that session and convinced myself it was possible, but still had the mono jam crux to figure out.'

Once the bruises on the back of his hands had recovered, Alex returned a few days later to find the crack to be a lot wetter than the previous session. He commented:

'The cave gets soaked every day by the tide and if the wind direction isn't right, the sea smeg can stick around inside the crack for a while before it dries out. I was able to dry out the crux and figure out a way through it after a bit of work, opting to use the mono with my right hand instead of the left as Tom had done. His beta is a crazy 270 degree spin through with his feet off the mono, but I was able to reduce my use of the mono slightly by going with the other hand. I was still unable to do the very last section, the foot first lip turn. I was in danger of taking the ride upside-down off the lip, so needed to find another jam to release the tension.'

On Friday, Alex returned to the crag with a strong southwesterly wind blowing into the cave, and the crack was completely dry.

'I spent the first part of the session fiddling inside the crack for any marginal jam near the lip that would allow me to reduce the tension and get under my toes, and was surprised to find a fairly good mono deep inside the crack that I had not felt before. That was the turning point for the whole project, and suddenly I was able to link the whole last section after the crux.

Alex tried some of the start moves to remind himself of the beta, then had a go from the ground. He explained:

'When I pulled on, I had absolutely zero expectation of sending. I just wanted to see if I could link up to the crux, then work on increasing the overlaps of the links for the rest of the session. Somehow, in a bit of a blur, I found myself yarding on the mono in the crux and then staring down the final section that I had just managed for the first time. It was by no means a perfect effort, and I had a few lucky breaks. My foot slipped out of a foot cam, then stopped before it was all the way out of the crack and locked in again. A jam that I usually take as thin hands felt so poor that I freestyled a ring-lock in the same place, a technique that I could never make work from the ladder. It was a little scrappier than I would have liked, but with some good quality try-hard I found myself rounding the lip and on the finishing jugs.'

On Instagram, first ascensionist and WideBoy Tom Randall wrote: 'New school strength meets crack!' An astonishingly quick tick of The Kraken has inspired an interest in crack climbing for Alex. He told UKC:

'I had expected this to be a much longer term project, and despite my first session being quite encouraging I was settling in for the long haul. To put it together so quickly is a massive surprise, especially as I have only climbed on a board for the last 2 months. I have to say that I massively enjoyed the learning process that this climb entailed. It's pretty cool to find a whole discipline of climbing that I have barely dipped my toes into and with so much left to learn.

'I'd definitely like to climb more crack in the future. Some of the best lines in the world are cracks, and I have the whole world beyond fists still to explore. Unfortunately most of these are overseas, so for now my focus is back to training for (eventual) comps. Who knows, maybe I'll build myself a crack machine and start doing some laps…'

Watch a video of Tom Randall's first ascent below:

During his teens, Alex made several hard ascents including Careless Torque (8A) at Stanage, Voyager (8B) at Burbage North and Pet Cemetary (8a+) at...

The Never Ending Story (Font 8B+) for Alex Waterhouse

Alex Waterhouse has climbed The Never Ending Story (Font 8B+) in Magic Wood, Switzerland. First climbed by Chris Sharma in 2003, the power endurance testpiece links an 8A+ into an 8A on stunning water washed granite.

Alex Waterhouse climbs The Fly (9a) in Rumney

Alex Waterhouse has climbed The Fly (9a) at Rumney in New Hampshire. The route was first bolted in 1995 as an open project, although the first ascent did not come until Dave Graham climbed it in 2000. At the time, it was one of the hardest climbs...

17 year-old Alex Waterhouse from Plymouth has made possibly the youngest-ever ascent of the seven metre... 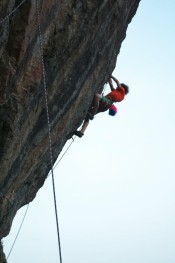 Having climbed one (soft) V5, I feel confident in declaring that Ladders Are Aid Climbing. No send.

(Joke: great effort! I saw the original video of Randall doing this and it is mind-bending that any human can climb such a thing. Hats off!)