Outdoor climbing is called sport by some, but it doesn't take place on a pitch or a track. Outdoor climbing takes place in the mountains, on edges, on the coast… and as the memories of movement fade, these places that have shaped us; their smells, sounds and landscapes, these things remain.

I first walked the rutted track from Breakwater Quarry, near Holyhead, to Ynys Arw, or as it is better known (or at least better known by non-Welsh speaking visitors), North Stack, over twenty years ago. That first visit was a disappointment: focused only on a climb, and the grade of a climb, I missed out. A few years passed, and with a mind more open after that first visit, I returned to this wind raked headland with Jules Cartwright. Jules didn't want to lead a climb on North Stack Wall, he wanted to climb in Wen Zawn, the welt cut into the grassy headland a short walk away, so happily, we agreed to belay each other on our respective climbs.

On that second visit to the northern edge of Gogarth Bay, I came to appreciate the more secretive cliffs, because in comparison to its neighbouring South Stack, with its road and cafe, this headland felt wild and untamed. There are many climbs on North Stack Wall and Wen Zawn, and in the years that followed, my visits became regular, and with each visit, my love of the land and sea, and the animals I shared this space, increased.

I once knew every step, each stone, each bramble, heather, gorse bush, every divot kicked into the dark earth, but a few weeks ago, almost twenty years since my visit with Jules, and after a break of four years, I returned to North Stack with Zylo Zylinski. On the approach, I couldn't remember the place to leave the track for the descent to Wen Zawn, so we stumbled through the heather in an attempt to see the coast and assess our whereabouts. Zylo suggested looking at the guidebook, but I could not allow myself to read approach notes, not for this place, this place was a part of me and I just didn't want to face forgetting, forgetting would confirm more to me than I was comfortable to accept. Looking at the coastline, it became apparent we had not walked far enough, and soon we were at the grassy col, staring out to sea, faces buffeted by wind. We made our way down the grassy slope until stood on the promontory above the climb Britomartis. The sea slurped around the brown boulders in the base of the zawn and above, the weak sun fingered the slabby grey and overhanging orange. Turning, I looked across the white caps to the sun lighting the zonation bands striping the base of North Stack Wall, and my eyes traced lines of climbs I was once intimate; from the solid black at the base, into the flaky brown and its slippery yellow maritime sunburst lichen. Through the spikey silvering green ramaliner and the delicate orange fairy cups, and almost always watched by the sad eyes of the grey seal, onto the flat top beneath the whitewashed wall of the old fog horn station. On numerous occasions, with ropes still attached, mentally exhausted, I had lain on my back, head surrounded by pink sea thrift, listening to the wind and the raucous razor bills nesting on the cliffs opposite.

Zylo and I geared up, walked to the opposite size of the zawn, abseiled, and fixed a belay forty metres above the sea. As I set off sideways on A Dream of White Horses, three grey seals swam beneath the arch, into the deep green at the back of the zawn. They rolled and twisted, a slippery knot of seals, before poking their shining heads clear of the water, watching me with dark eyes. They howled then, their voices echoing from the salty walls. Seals can live up to thirty five years and as I shuffled sideways the wind puckering at my aging face, I imagined they had recognised me.

Crag Notes is a new series to UKC, focussing on people and place. Distilled down into short form, each piece will centre around our connection with the outdoors (and what's within it) in some way, shape or form. However, each will differ in their own unique way, as we'll be featuring a variety of contributors, some of whom will be familiar, others less so. Creativity is key, as is diversity, so expect something a little different with each one. We'll be publishing a new note each month, so watch this space for further scrawling. 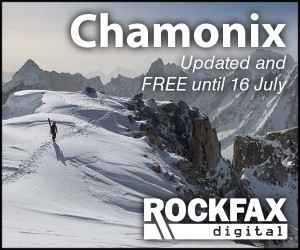 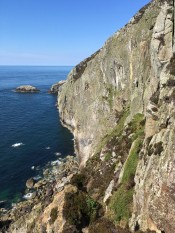 In this week's Friday Night Video, Rich Heap and Ben Pritchard of Slackjaw Films follow Ruth Taylor and Trevor Massiah on an...

Alex Mason has established a new E8/9 6c up the centre of the steepest section of Gogarth's Main Cliff. Alex's line links two 4...

Nick Bullock should need little in the way of introduction.

One of Britain's finest alpinists and rock climbers, known for bold and audacious ascents, he is also a writer and occasional poet. A man who had...

Lovely essay. It's been a lot longer than 20 years since I was last at Wen Zawn, but it took me back.

Really nice piece. I just finished 'Tides' by Nick Bullock and thought it was an excellent book - even better than 'Echoes'. Recommended.

Thanks for publishing this UKC - I'm looking forward to the next one in the series already.

It is an odd sensation to go back again. I have severable places, Ramshaw Rocks, Baggy Point, Cwm Idwal, where I try to stop by periodically and touch base; just to make sure they are still there. Once it was a two hour detour just to scramble round the paths at Ramshaw in the gathering dusk with my sons. Didn't climb anything but it remains one of my great climbing memories.

Last week my Dad and I returned to Cwm Silyn which must truly remain unchanged since our last visit to Outside Edge on dark January day 30 years ago. To demonstrate how we'd moved on we shivered our way up Kirkus's Route, feeding the hireath as the white clouds sped past. Now Fayther tells me, after consulting his diaries, that he had already done Kirkus's, linked up with The Crucible a mere 14 years ago and had completely forgotten it! Which shows what a fickle friend memory is. (Although he is 75 and has an excuse of sorts).

The Sunday morning was sodden but we made the pilgrimage into Cwm Idwal and up to the slabs. Putting down our lattes from the new tea shack (no bacon and egg anymore) we scrambled up a ways, just to lay hands on the great, streaming quartz friezes one more time.

Its better to go forward, but sometimes it's nice to go back.

'and as the memories of movement fade, these places that have shaped us; their smells, sounds and landscapes, these things remain'

And it is not just the memories of movement that fade when you reach a certain age. When movement itself fades, the smells, the sounds and the landscapes take on more importance and meaning. Just being in that environment will bring back memories of youth.

Last year, after the lovely Zylo introduced me to Nick, I went away with one thing on my mind: North Stack Wall. Almost a year later, towards the end of another 'expedition home', I found myself abbing into that very zawn, attached to some nuts wedged under a loose rock wall, the wind buffeting me, crapping my pants. There was that grey sail, floating on its back, looking up through his onyx eyes with an air of mild intrigue. What could he be thinking? Or she. Descending the line, I turned my head to the right. No. Way. There it was. The Bells peg! I wondered how Nick must have felt as he whipped onto it!

Pants filling up, I oggled gear options on my own chosen line, tested the holds and worked out where the route roughly lead. Jugging back over the edge, I found my prospective belayer who, naturally, I'd just met, lying in the grass being tossed about by the gusts. It was much nicer yesterday, I shouted. Maybe we should come back?

Indecision gripped me. I felt lost. Until I came up with a plan to trick myself. Resetting the ab rope several metres to the left I said, Lets just ab with the ropes and chill out down there, it's probably nicer at the bottom. If I don't feel good we can always jug out again.

As I touched down, another, invisible seal lounging on a rock nearby promptly belched at me. Too lazy to flop away, he made a rough inspection, then lay back down flat on his back with a slap and a deep, steamy, resentful sigh. That's the life.

My heart was fluttering. So I walked barefoot over the rocks, feeling their salt-sand clag and slimy dampness; the odd barnacle scratching my skin. Near the back of the zawn, where the tides don't quite reach, was a fat white lump of baby seal. It yapped, high pitched like a puppy, to its mum floating out on the waves. All life was down here. A functioning society. Simple, and effective. I thought about ours, waiting for me at the top of the cliff. Yikes.

It still didn't feel like the right time. But as I walked back to our pile of ropes and gear at the base of the climb I went into autopilot and simply racked up. I don't want to jug again. I'd rather just go climbing. That's all it came down to - a kind of dull, twisted laziness. After placing a low nut, I started into a layback, and ripped the first hold right out of the wall. Luckily I had most of my weight on the rail below and recovered, then simply tried again, this time reaching the first good cam.

Unconscious then. Loving the movement. The sea air. Feeling my way. Until the end. Blinking salty half-thoughts away, and gently rolling my eyes, I imagined looking up from the water's surface at this strange, two-toned creature scaling the cliff, with a mild intrigue. Then I pulled up over the top, chased by that belligerent wind.

As my trusted belayer and friend of 3 days followed me phocid-like onto the cliff top, he repeated the words, "I can't believe you just climbed that". But all I could think was “The Bells! The bloody Bells!”

To Nick (you nutter). You move on. You forget. But your story never stops. Thanks for the inspiration.