In the space of a few days, the bustling valley scene has cross-faded into quiet streets and deserted mountains. The peace and quiet is eerie; Chamonix is an alpine ghost town. But there's also beauty to be found, as European larch forests gradually fade from green to amber, signalling the arrival of autumn as the mountains prepare for their annual dusting of frost and snow.

'It's such a harsh environment,' a man whispers as the cable car nears the mid-station of the Aiguille du Midi. I'm suspended in the air, caught somewhere between the seasons, and the summer heat has shed the pinnacles of their snow and ice. The exposed granite above appears naked and parched. Dust whirls around the spires as the wind picks up.

Lost in thought as the cabin ascends, I contemplate the man's use of the word 'harsh' to describe this environment; people tend to view mountains as emblems of strength and resilience, while overlooking their sensitivity to both climate and climbers.

In his novel First on the Rope (1941), writer and mountain guide Roger Frison-Roche wrote a vivid description of Mont Blanc and the Chamonix skyline: 'Its topmost dome rested, like the dome of a Byzantine cathedral, on the intricate architecture of the Aiguilles, whose outline was sharpened by distance. They formed a forest of stone where pillars, towers, campaniles and turrets, all decked with snow, crowded together in fine confusion. The Bossons and Taconnaz glaciers, seamed with lateral crevasses, crawled lazily down like enormous reptiles.'

Eighty years later, those reptiles are retreating and the cathedral is burning. An all-time high temperature of 7 degrees Celsius was recorded on the summit of Mont Blanc in June 2019. The freezing level in midsummer now lies above the summit of the mountain, meaning that each glacier and snowpack is warming. The permafrost 'glue' holding the rock formations together at altitude is melting as temperatures rise.

The Plan de l'Aiguille (2310m) marks a threshold between civilisation in the valley below and the wild geography of rock, ice and snow that lies beyond the summit sentries of the Aiguilles de Chamonix. To merely play on their jagged offcuts - the jumbles of granite boulders - might seem like a cop-out or compromise; a half-hearted attempt to be bold or brave. But being in-amongst this terrain where forest and mountains meet makes me feel far smaller than I do on the summit of a peak; the scale is harder to grasp from below, so I spend more time immersed in the scenery and soundscape, while enjoying gymnastic movements on rock.

Marmots, bouqetins (ibex) and chamois graze on the fruits and flowers of the alpine meadows, preparing to endure a long winter. Sound is warped as the altitude seems to tune the ears to hear different frequencies; dull echoes of trundling rockfall, the high-pitched calls of choughs and the static hum of the cable car. In-between these disturbances, there's a silence that nonetheless has a sound. I can't name it, but perhaps it's an expectation of noise in a dramatic space, or some physiological phenomenon.

As I search for another line to climb, a chattering of choughs jostle for position on a rock and gesticulate with black wings and yellow beaks. Their warbling churr sound is distinct from the usual echoing preep that I have come to associate with being up high and in rarefied air. Their gaze is firmly fixated on the Frendo Spur, a curving ridge which leads up to the Midi Station and a popular - but increasingly precarious - climbing route.

I follow their lead and look up to the Spur. I can't pinpoint a reason for their alarm calls. The surrounding Aiguilles comb the sunlight into rays and the ridge looks dry and bare. I stare at it for minutes, deep in quiet contemplation as the birds continue their alarmed chatter.

Choughs are believed to have nested at a higher elevation than any other bird. In mountain lore, these birds are said to be physical manifestations of the souls of deceased climbers, accompanying mountaineers by circling close by on their ascents. Their flight is aesthetic; they arc and glide along thermals and spread the air with their wing tips splayed like fingers.

When climbing in the massif, a chough signalling its presence always brings me a sense of comfort; in their patrolling of the peaks, I consider them to be guardians of this landscape. But as the mountains heat up, choughs are forced to nest and feed at increasingly high altitudes. Their nest sites – typically small ledges, caves or cracks in the rock – are also under threat from rockfall. Perhaps these choughs were mourning the loss of a nest.

The giant boulders conceal their full form until I shift around their aspects. An arête hides a clean overhang beyond it; an inviting slab curves into a ship's prow. Many features of this landscape are vulnerable to the passage of time. Snow, glaciers, trees, animals and humans are all ephemeral, but the mountains with their coarse granite withstand the elements better than all. Now, as the permafrost melts, they too are falling victim to a warming world.

I inch up a slab and take in the view from another angle. Rockfall is regular and unnerving, generating a thunderous, primal roar that causes me to instinctively look upwards and flinch before watching the blocks bounce and crack and release the earthy scent of cordite from afar. I can't help but think about where these boulders used to sit, somewhere up high on the massif. I imagine putting them all back into place, like a geometric jigsaw puzzle; a Sisyphean task.

While the mountains shed their layers and create a new landscape, the glaciers disappear forever. I rest between climbs and think of the nearby Mer de Glace.

Passengers descended just three steps to reach the Mer de Glace glacier from the Montenvers station in 1908. This summer, in 2018, with each downward step, I felt a sense of walking through time. Years passed by as I continued my descent. A curious presence felt through absence filled the cool, thin air. 'Level of the Glacier, 2003'. Five years elapsed, then ten, then fifteen. Hundreds of steps and ten minutes later I sensed the plight of this waning giant, retreating inside its chilly core as the heat ate into its thinning extremities. History seeped through yawning gaps in its skin. 'Level of the Glacier, 2018'. I knew its depth, but not in essence; I was born too late to know.

I take photos of the choughs and stop myself as I clumsily attempt to frame a panorama. While scientists measure the environment in metres, degrees and years, the value of mountains seems increasingly to be measured in likes, summits and selfies. I put the phone away and try to be more present.

Spending time in and growing to know a place heightens a sense of responsibility towards it. The choughs in the Mont Blanc massif are like canaries in a coal mine, I realise. A sign of crises current and future as the mercury rises: crumbling mountains, melting glaciers, devastated ecosystems and climbing routes relegated to memory and media only.

With a layer of skin shed and lungs refreshed by alpine air, I leave my little bubble of bouldering focus and join the queue for the last one down to civilisation below, descending through the thick smog that the summer traffic left behind.

Out of sight, but not out of mind. It's a harsh reality. 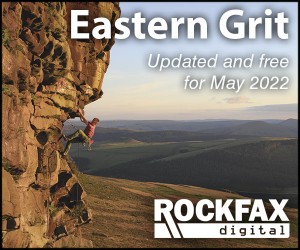 On The Path to Recovery

An Environmental History of Mountain Recreation

Eder Lomba has made the second ascent of Steve McClure's Rainman at Malham Cove.  The route was first climbed by Steve in...

John Kelly has settled unfinished business before returning to the US by breaking Sabrina Verjee's record for a continuous round...

Finlay Wild has just completed the Paddy Buckley Round, solo and unsupported, in a time of 15h14m45s, convincingly breaking Kim...

Nice article. I particularly liked this phrase: "there's a silence that nonetheless has a sound." That resonated with me. As did the descent of the Montenvers ladders taking you down through glacial time.

I remember, in the 1980s, using an old guidebook to set off for the Biancograt on Piz Bernina, which described a quick scoot up an icy gully. Instead we found ourselves on a slow and loose ascent, the gully having melted years ago.

First time I've heard of the Mont Blanc massif described as a "crag"!

Nice article, I enjoyed this. Having been going to the Alps for a for a few years now, the descriptions of the changed environment really resonated.