A Tale of Two E1s 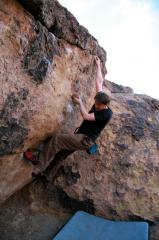 My first E1 attempt failed. My second one succeeded. In the year between, I climbed nothing harder than VS. So what made a difference?

I like slate. I like the just-short of vertical angles; the small, but positive, edges; the emphasis on foot-work; the high-steps and rock-overs; the small dead-points. I had never onsighted HVS, but nevertheless decided to try Fool's Gold.

Under the line, I wasn't certain that I should be there and had more butterflies in my stomach than could be explained by adrenaline. I was intimidated and trad doesn't work when I'm intimidated. Still, “as I'm here, I'll give it a go”...

The route starts with easy climbing on ledges to a platform under a triangular mini-roof. You then move up and right into a crack which leads to the top. The crux is just after the roof. There is gear aplenty at the platform. As you move to below the crux you get what has been called the most bomber placement in Wales; a T-shaped notch which would hold a falling baby elephant.

I moved out from the roof and got the key wire. The finger-lock felt ultra-positive on smooth, non-painful rock. The move to the gaston felt good and I was through the crux. Here is where it all went wrong. I thought that if I got the crux, it was all over. Now here I was with a tenuous gaston and foot-holds that felt like micro-edges, looking up at a crack which stretched to meet the sky. The guidebook says that the next section is solid 5b; it looked it. I had latched a 5c sequence, but a series of 5b moves was beyond me. Stupidly, I hadn't expected anything more than a VS romp. The bubble burst: “you are in over your head, what were you thinking of trying an E1?” Despondently I lowered off.

I got everything wrong. I jumped on an E1 when I had been climbing nothing harder than HS that week. I picked a climb with a higher technical grade, when my strength is easier moves above gear. I had not warmed up. The initial climbing was so easy that I was “cold” at the crux. I had no plan for the route post-crux, naively assuming that it would be OK. When things went wrong, I didn't try to reassess the situation, I panicked.

I didn't form these learnings immediately. I just thought that this level was beyond my meagre abilities and I had no business being climbing it. It was a long time before I tried another E1.


TRNovice rather chuffed with completing his first E1 (even if UKC gives it E2)
29th July 2007 - Seams the Same (E1 5b) - Serengeti Area of Dinorwig Quarry, Llanberis


Under Seams the Same similar thoughts were buzzing round my head, but there were differences. I had climbed the adjacent Seamstress and so already reached the top of the slab. I wasn't exactly confident about the climb, but I wasn't intimidated either. Perhaps I had no great expectations of finishing, but I had a more positive attitude than a year earlier.

Seams the Same is an easier technical climb than Fool's Gold, but described as being somewhat bold. The moves are fairly consistent 5a/5b and a bit like Seamstress: lay-back on horizontal edges, get your feet near your hands, rock over. The holds are smaller and further apart, but the moves are beautifully in balance.

I got my first wire and felt secure enough to contemplate the rest of the climb. If I could manage this far, then why not the next section as well? I stopped worrying about the rest of the climb, just the next sequence and placing more gear. At two-thirds height there is a slight bulge where the more vertical lower slab transitions to the gentler upper one. I placed a DMM peanut and convinced myself that it was good; denial can be positive sometimes! I dipped my fingertips and committed. It felt smooth and easy; a well-oiled by-product of the other 5b moves below. I was on the final slab.

The lower angle makes the next section more amenable; mostly 5a. However I had passed the obvious gear placements and had a maybe 9m still to climb. I had to maintain the same measured fluidity that had got me this far; rely on confidence acquired on the lower, steeper section. I kept on deliberately; not too quickly, making sure my foot-placements were secure and my weight was in the right place; but equally not really pausing; just flowing slowly and smoothly upwards.

But I nearly blew it. With the final jugs in sight, a rogue voice popped into my head “you are going to do this!” For a very different reason, the bubble nearly burst as it had before. With effort, I buried the thought and concentrated on the moves. “Where am I going to step to? Where is my next hand hold?” I focused on the next move, and then the next, and... I had my hand on the belay ledge! A quick mantle, an expletive and I was at the top. The grin didn't subside for several days.

My happiness was neither just in getting the Extreme tick, nor in “slaying the beast” of Fool's Gold. The climb had been a really good experience. Despite a couple of pauses, I had felt “in the zone” throughout. It had been easy, it had felt natural, it had felt that I was meant to be there and meant to be doing this climb; feelings a million miles away from my experience a year earlier.


Things that Made a Difference

I warmed up. I did some bouldering on the same rock. I wasn't “psyched” about the climb, but hadn't written off my chances before setting rubber to rock. I picked a route that played to my strengths, with a reasonable technical grade. The sustained technical standard meant that the early moves got me engaged, rather than worrying about a crux above. I tried to hit mini-goals: stick this next move, get to that jug 3m above. I made myself focus on the climbing when assailed by premature thoughts of success.

Also, in the intervening year, I had climbed so many HSs and VSs that I believed that I owned the grades. You could argue that being solid at HS isn't much help on E1s, but if I can climb any HS, then surely I can climb some harder routes that suit my style.

However, what helped me most was bouldering; something; I had done tons of in between. A day earlier I climbed up to V3. Becoming accustomed to regularly sticking UK 6a moves is good if you want to stick UK 5b ones!

So, a recommendation from a trad climber who likes easy mountain routes: if you want to lead harder, buy a bouldering mat and a beanie!

Jack Geldard
1 Aug, 2008
Special thanks to TRNovice for re-submitting "the psyched cut". It was appreciated. Jack
Michael Ryan
1 Aug, 2008
Oh My Gawd..."So, a recommendation from a trad climber who likes easy mountain routes: if you want to lead harder, buy a bouldering mat and a beanie! "
Paz
1 Aug, 2008
One's got F6a+ climbing and the other's F5/5+.
RocknRoll
1 Aug, 2008
I can't boulder anything harder than V1 but I can lead E1 5b no problem. My mate can boulder V4 and can just about do E1 5b. I am thin and do lot's of aerobic exercise, he is built big and boulders three days a week. I reckon one way to E1 is to be bold and have endurance fitness so that you can recompose yourself after a hard move. E1 5b isn't always strenuos. E3 6a is strenuous, I reckon bouldering would be good for that. It depends on what the individuals weakness are.
Tom Phillips
1 Aug, 2008
I agree there, I think the way to improve a grade at this level is to improve endurance. Get a shunt and find a local crag suitable for training. Bouldering improves power, but doesn't do much for real endurance similar to that needed for E grades. Still feeling fresh when doing the crux moves makes a huge difference
More Comments
Add Comment