Whilst Caldwell and Honnold are two of the best climbers in the world, and Caldwell has previous Patagonia experience, this trip was Alex Honnold's first time in the region, and followed a season of prolonged bad weather, even by Patagonian standards.

With such a stunning ascent under their belts, and in a relatively short timescale, we were eager to chat with Honnold and find out more details about the traverse.

But there's more to Alex Honnold than just climbing. Although he is reticent to talk about his work through the 'Honnold Foundation', we found out just a few snippets on how Alex is helping promote and provide small scale solar energy to those who need it most.

This was your first time in Patagonia - can you tell me what your first impressions were, and your expectations prior to the trip?

Alex: My expectations were for a lot of wind and terrible weather. And big scary mountains. For the most part it lived up to expectations. The hikes were even bigger than I feared and there was a lot of wind and marginal weather. But overall it was a lot nicer than I expected. Amazing bouldering, easy living with nice accommodations and good food, and great rock climbing when you finally get to go to the mountains. I'm planning to go back.

Alex: Tommy and I attempted to go in and climb the Whillan's route on Poincenot at the beginning of the trip just to get our legs under us a little bit, but the snow conditions seemed heinous [3 hours of post holing to get to the route] and we wound up wandering up to the Brecha instead and doing the first pitch of the Franco. It was very icy. Then we went back to town since conditions didn't really allow climbing. Our first real weather window we did the traverse.

Afterward we went up and climbed Blood on the Tracks on Rafael, just to get in a little more climbing before we flew out. We wound up being super tired on it and climbing terribly. We definitely weren't recovered from the traverse.

Where did the idea come from to do the traverse? And how did you feel setting off on such a huge climb?

Alex: Tommy had mentioned the idea to me quite a while back and we both were pretty psyched on it. That kind of objective suits both of our styles perfectly - simul climbing over moderate terrain forever. It was a bit intimidating to set out into the mountains, especially for me since I don't know anything about ice climbing or glaciers and there is a distressing amount of snow in Patagonia. . .

Can you tell me about the actually day to day climbing of the traverse? How did you do it (what systems - moving together, pitching etc), where did you sleep, what gear did you take, and how hard was it?

Alex: So we set out with what we thought was 3.5 days of food or so, but it turned out lasting 5 no problem, which just goes to show how poor we are at planning. We each had medium loads in our backpacks, slightly heavier for the second and lighter for the leader, though since we were almost always simul climbing it didn't make a huge difference. We basically just slept as soon as it got dark every night, just because route finding was one of the biggest cruxes and trying to find our way in the dark seemed like a really bad idea. It wasn't technically super hard, but it was just nonstop climbing, rappelling, and general toil for 4.5 days. Not very much sleep, and not great sleep at that since it was cold and we had no pads. Basically we got really worked. But it was amazing.

Can you elaborate on the difficulty, not just in terms of grades, but in terms of sheer volume of climbing, tiredness etc.

Alex: Just the thousands of feet of rappelling were no joke. Pulling and flaking ropes hundreds of times gets pretty tiring. And then carrying a backpack for days, and of course the actual climbing. Basically it just all made us tired. The thing is, when most people go climbing for 8 hours they are actually belaying for 4 of the hours. But since we simuled everything we were literally climbing the full 8 hours. Except we were climbing more like 15 hours a day or something. It was the most tired I've ever been.

Alex: Tommy is the most positive person in the world. An eternal optimist. He's a pleasure to climb with because he's pretty much impossible to frazzle. He never stresses and never complains. And of course he climbs like a machine. Basically he's the perfect partner for this kind of thing. I think my best feature for this climb was just that I can simul climb on rock forever. I lead several 300+m pitches on the traverse. My worst feature was definitely the fact that I don't know anything about alpine climbing and wasn't super useful at finding rappels, dealing with snow or mixed climbing, or even simple things like trouble shooting the stove.

Now that you've experienced Patagonia, and the Fitzroy traverse, will you be going back for more? If so, what?

Alex: Tommy and I talked about trying the Torre Traverse next year. I'm pretty psyched to go back. If nothing else the bouldering is just as good as somewhere like Bishop, except that the mountains are so cool that it gives you the option to do more if the weather agrees.

Alex: I don't know where climbing is going, I suppose it will continue along the same trends - harder, faster, higher, etc. People routinely on sighting 9a and simuling up huge mountains and whatever else. Who knows what part I'll play in any of that, I already look at kids bouldering and don't even understand what's happening. It's crazy how strong everyone is now.

Personally I'm hoping to just keep having cool adventures and pushing my own climbing however I can. We'll see how it all plays out.

And what about 'The Honnold Foundation' - can you tell me more about that?

Alex: I always feel weird trying to plug my foundation or any nonprofit stuff, but honestly I have been getting more psyched on that whole world. Solar projects are kind of awesome because they actually improve peoples' lives, which climbing just doesn't do at all. So I've been getting more involved with solar nonprofits, including UK based Solar Aid, and trying to do something useful for the world. It's nice being able to leverage my relationship with sponsors and media and all that and harness it in a slightly more useful direction.

And you're currently cycling through the US desert, on some sort of solar mission?

This current bike tour that I'm on with Cedar Wright is my first attempt at a hands on project as the last 2 years the foundation has just been giving grants to other nonprofits, but I'm hoping to do more trips like this in the future.

But we'll see where it all goes, I'm just psyched to do something useful.

Thanks Alex - good luck with the Foundation, and of course with your climbing.

"An estimated 18,000 homes on the Navajo Nation in the four corners region of the United States lack access to electricity. Many elders and families use dangerous and polluting kerosene and propane lanterns for light in their homes, trapping in harmful fumes and posing serious fire and health risks. Families spend $20–$40 each month on these inefficient fuel sources–a huge price considering that many survive only on $700 each month. Families are paying up to 6% of their income for a light source that is slowly killing them. Since 2010, Elephant Energy has worked to provide energy access for Navajo elders, families and school children through the distribution and sale of affordable and efficient small-scale solar technologies."

This spring the Honnold Foundation is partnering with GoalZero, The North Face, and Clif Bar to expand Elephant's efforts and initiate a solar entrepreneurs project in the Kayenta Region of the Navajo Nation. Through generous solar product donations from GoalZero, fundraising matching from The North Face, and support from Clif Bar, we'll be able to help bring Elephant's proven strategy to a whole new area!"

To find out more about Alex Honnold's current trip to provide solar energy to the Kayenta Region of the Navajo Nation check out his Honnold Foundation Website.

Me Again - Climbing with Arthritis

Alex Honnold Honnold - The Art of The Dark Lord

Two weeks ago the masses were informed about one of the greatest climbing pieces of art that we have heard about. Alex's free-solo of El Capitan - The 3000ft granite wall in Yosemite. I say 'art', because that is how I see it. I see 'art' as an ac... 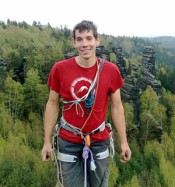 We speak directly to Alex Honnold about his speed solo of 'The Triple'; the three biggest faces in Yosemite Valley, in a single day. This ascent is, to put it bluntly, mind-boggling.

Alex Honnold and Brad Gobright have teamed up to make the second free ascent of El Niño (5.13c/8a+) via a three-pitch extension called Pineapple Express. The variation was first climbed by Sonnie Trotter and Honnold in 2018. Honnold...

Alex Honnold has become the first climber to free solo El Capitan in Yosemite. On 3rd June 2017, Honnold left all...

The Sufferfest team reunite for an African adventure in Kenya. Alex Honnold and Cedar Wright bring their usual...

Dan Osman achieved fame through a widely-shared video of a speed solo ascent of Bear's Reach on Lover's Leap, near Lake Tahoe,...

Unless you somehow managed to avoid the excitement and social media frenzy, you'll know that Alex...

Tom Briggs
16 Apr, 2014
Definitely the most illuminating of interviews I've read with Honnold about the Fitzroy Traverse, plus I'd never heard of the Honnold Foundation - thanks.
Robert Durran
16 Apr, 2014
So the upshot is that Patagonia's the new global bouldering mecca (with maybe a bit of alpinism thrown if the weather's nice). And good to know that all that's required to achieve one of the greatest ever feats of alpinism is to just climb "moderate" ground forever.
James FR
16 Apr, 2014
I enjoyed that phrase too. Here are, chosen at random, a couple of the routes that they used during the traverse:http://www.pataclimb.com/climbingareas/chalten/fitzgroup/guillaumet/brenner.htmlhttp://www.pataclimb.com/climbingareas/chalten/fitzgroup/fitz/casarotto.html
Michael Gordon
17 Apr, 2014
Great stuff, thanks
Tom F Harding
18 Apr, 2014
The photo from day 1 is incredible. Inspiring stuff.
More Comments
Add Comment
Loading Notifications...
Facebook Twitter Copy Email