An Interview with Mina Leslie-Wujastyk

Mina Leslie-Wujastyk is perhaps the most accomplished female boulderer in the UK.

Her tick-list includes classic test-pieces such as Jerry's Roof in Wales (Font 7C), Teamwork and The Arete With the Pocket both in Chironico, Switzerland (both Font 8A), Brad Pit at Stanage (Font 7C+), Salle Gosse, Noir Desir, and La Berezina all Font 7C and all in Fontainebleau.

She has climbed seven Font 8A problems in the last 12 months (5 'up' problems and 2 traverses) as well as ticking the fingery sport route of The Sissy (F8a) at Rubicon in the Peak District.

In this short interview UKC Editor Jack Geldard finds out a little more about her, what attracts her to climbing, how she got so strong and what type of training she does.

What is it about climbing that grabs you?

I just love the physical and mental challenge. I like bouldering in particular at the moment because it is an intense and powerful type of climbing. I like being able to work on individual or a small number of linked moves that are at my limit. I find climbing acts as an escape too, it's never a chore (even to train) and it almost always makes me feel good. Having a hobby that takes you outside in beautiful weather is great too.

Speaking of weather, would you say that is one of the main barriers facing boulderers in the UK? Is that what is stopping people pushing to the next level?

I guess weather is the thing that seems most obvious, especially at the moment. We just don't have enough good weather days to work on projects or get out climbing on rock in comparison to European venues.

Yes, it's currently pouring down here in Llanberis. You seem to get away quite a bit though and climb a lot in the Ticno area of Switzerland.

I really like Ticino, especially Brione. The rock there is so nice to climb on and there is just so much of it. I went there for the first time in Jan 2009 and then again for 7 weeks or so in Dec 09 and I had a great time.

How do the grades of the problems there compare to say Fontainebleau and the UK?

I really don't know about the grades. Some things there are maybe a bit soft but others I think aren't. I think that there are so many problems at any grade in Ticino that you really can find things that suit you and therefore you have a higher chance of climbing hard. Many problems have now had world class climbers climb them, and lots of grade adjustments have been made, so I think it is more accurate than it used to be. I haven't climbed V11 in Font or the in UK and this might be due to the grade difference or it could be down to finding the right problem for me and putting the time in.

Climbing at your level, ticking quite a few Font 8A's, you must more than occasionally 'burn off' the odd bloke at the crag. Have you found that men ever mind being burnt off by a woman?!

That happens sometimes but in my experience guys seem okay about it. I've never experienced any negative behaviour because of a situation like that. Maybe a surprised look now and then.

How did you get to the level you are at now, climbing Font 8A? Were you just really strong when you started or have you trained hard?

I started climbing when I was eight and have always loved it. I think it helps to start young as your body gets used to the movement. I started to train and climb more about two years ago and it made a massive difference. I always had relatively strong fingers but lacked the body strength and power to make big or dynamic moves. I used to climb very statically and changing this opened a lot of doors for me.

Did you just change your climbing style or did you do something specific to improve your power?

I started climbing steeper problems and trying things with more dynamic moves, as well as learning to use a campus board, albeit it slowly. I also started doing general conditioning like press-ups and leg-lifts, which helped.

I think for me the hardest thing is staying motivated when I am trying a problem from the start (on the link) and I keep falling session after session on the same bit! I get bored of the problem but don't want to leave it because I know I can do it.

So you really have to be motivated and stay with it for the long game?

I tend to just knuckle down and keep having another go or if I get really frustrated I leave it temporarily and start working something else. Being injured is truly rubbish too. I have been pretty lucky to be honest and my worst so far has been my knee which stopped me from trying certain problems but not didn't stop me climbing altogether. It has pretty much cleared up now but at the time it was so frustrating.

And how do you view danger in relation to rock climbing?

Can you see the attraction at all or is it something that you try and minimise?

I like the feeling of doing highball problems and often the lines are more insipiring but when it comes to doing hard moves high up or over bad landings my resolve cracks a bit. If I know I can do the move then I will, but if I risk hurting myself then I'm not so bold.

Read more
Since your last brief interview on UKC last May you have achieved quite a few of the goals you set for yourself, including climbing Jerry's Roof (Font 7C). Did you ever try Caviar (F8a+) at Rubicon in the end?

I briefly tried Caviar but didn't really go with it and ended up trying the F8a 'The Sissy' instead. This took me ages but I did it eventually!

This year I would like to get to Font (if it stops snowing and raining) to get back on the Font 8A 'Les Beaux Quartiers' which feels like it could potentially go, try again on Louis Ferrino (Font 7C+) at Parisella's Cave, and if I get the chance to go back maybe work a bit more on Pura Vida (Font 8A+) in Magic Wood. But who knows :)

And general goals or ambitions?

I want to keep enjoying it as much as I am now! I am training quite a bit now and want to get better and stronger but that will always be the case :) I have some problems I want to do this year and I would also like to give the international competition circuit a good go.

Mina Leslie-Wujastyk - The Journey so Far 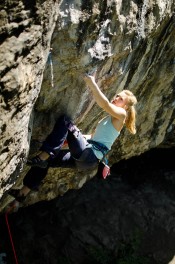 Safeguarding Young People in Climbing and the Outdoors

Anna Taylor on her Classic Rock by Bike Tour

Born in 1987, Mina has been climbing since she was 8 years old. She gained fame with some hard bouldering ascents and on the competition scene, but lately has been cutting her teeth as a top level sport climber.