In this series of interviews, we whisk off some of Britain's best climbers to a lonely desert island (we might give them a belayer to take along, if they're lucky...) and asking them to regale us with tales of their eight favourite routes of all time, before singling one out to have as their "Desert Island Climb." Alongside their chosen route, our climbing castaways will be asked to select a book and a luxury item to take to the island.

This time it's mountaineer, alpinist, writer, mountain guide and all-round climber Andy Cave's turn to select his eight favourite climbs from around the world. Beginning in the depths of the Yorkshire coal mines and rising to Himalyan peaks, Andy's climbing journey has included a mixture of disciplines, styles and locations which is well reflected in his eclectic choice of career-defining routes.

Andy has chosen the complete works of Tolkien as his book, and an iPod with every song ever recorded on file for his luxury item...

"Climbing for me has been about the people, the places and the fun as well as the actual climbs themselves. I feel privileged to have savoured so many beautiful places and to have shared some great adventures with good people.

The mountains and cliffs can teach you a lot about courage and humility. There are so many memorable days; to pick eight is quite impossible. I have left out over a dozen expeditions to Patagonia, Tibet and Alaska, not to mention countless grand days with clients whilst working as a guide. Like a lot of British climbers, I like to mix up what I do, hence the variety in my choice."

Janus E7 6b, Curbar, Ground Up

Climbing on grit is where the journey began. Small cliffs with such big feel routes and strong lines that demand so much. The myth and the mystery is all part of it, as is knowing when the time is right to tie on and get stuck in.

I have done a tiny amount of head pointing, but personally the best feeling is ground up. I waited years before trying Beau Geste and it was a relief to get started – and to get the first big monster whipper out of the way!

I treated Janus with the same respect. This super Dawes classic, requires grace, power, subtle body positions and nerve at times. Once done, I felt a tinge of sadness that the experience was over and that I would never get to climb into the unknown on this bit of stone again.

I took a couple of days off then flew to Africa and did a couple of routes on Mt Kenya, the Diamond Coulouir and the Scott-Braithwaite free.

I was just 20 years old, but up for any challenge that presented itself.

The following year I got invited on 3 Himalayan expeditions, making a couple of first ascents. They were all back of a beermat planning, low-key affairs. Proper adventure.

Laila peak is such a stunner. The rest of the team (Simon Yates, Sean Smith, Tommy Curtis) already had a few Himalayan trips under their belt and proved great mentors. I went on to climb at 8000 metres and climb harder technical routes, but still I have great memories of this trip (and the Tupopdan Expedition just before it). The innocence of it all and the great guys I was with. I cashed in my miner's pension to pay for the 5 months in Asia. Well worth it.

Technical climbing at high altitude is still the hardest of all climbing disciplines to my mind. You need to have a great team to succeed.

The sea, the architecture, the colours, the aura of the climbs; Gogarth rarely disappoints. Dream, Mousetrap, Hunger, Citadel…memories that last a lifetime. This line is top drawer and still unrepeated, I think. The Jub-Jub Bird, Free Stonehenge, Conan the Librarian are all decent challenges, but this one is a step up. A steep, strenuous, spectacular crackline definitely entertains, and a full-body work-out is guaranteed. There's no easy retreat either.

Perhaps the biggest challenge was negotiating the notorious blacksmith bloke to get to the cliff, probably E6 in its own right!

We are so lucky to have the wild unspoilt landscape of Scotland. To me a good day here in winter is unbeatable. I have been fortunate enough to share some tremendous 'spur of the moment' adventures with good partners up north – Citadel, Un Poco Loco, Diedre of Sorrows, Genesis etc – but the Sky Ridge in winter has to be one of my all time favourite memories.

My friend Neil McAdie and I found this in perfect condition, cold crisp neve, no people, relatively still, gorgeous light. What I loved most was the great drops down to the ocean. Technically easy, but you wouldn't want to slip.

When it's in condition, just ditch everything and go. Remember to celebrate in the Sligachan with a fine malt afterwards!

For years, I'd never had the desire to spend a lot of time sport climbing – couldn't sit still long enough, liked to get a view from the top of a route etc - but in the early years of being a dad it seemed to fit well. Having fun, local challenges to keep the focus and motivation is excellent. It's interesting to climb without the danger associated with trad and alpine climbing, it requires a different mind set. You have freedom to explore physical and technical limits. The mental side is tough when redpointing near your limit. It keeps you sharp for when you return to the mountains I think.

There is some good energy on the UK sport-climbing scene and a bunch of great, supportive folk. The UK doesn't have masses of sport routes (and our 'easy routes' are not so easy), but we do have some world-class lines; take Malham for example - from Yosemite Wall and The Groove to Steve McClure's awesome looking route Rainshadow.

Austrian Oak oozes quality. I loved the moves on this right away, a kind of power and poetry fusion. I danced as a kid and remembering all the subtle body positions and precise foot moves on these routes shares something with dance.

A big part of my climbing energy has been focussed on pioneering first ascents in remote places in good style. Thankfully, my climbing path seems to have swerved away from aid climbing, fixed ropes, Sherpas, bottled oxygen, crowds and the like.

Immortalised in Boardman's book, The Shining Mountain, Changabang has always seemed special to British mountaineers. Despite constant storms we found a way up the audacious north face via some great technical climbing.

The descent however was not the stuff of desert islands. Ironically, it was during the easier descent that we ran into problems. Firstly, Sustad and Fowler fell down the South face and somehow stopped and survived. Brendan Murphy and I then joined up with them for the descent of the normal route. Here Brendan was hit by a massive avalanche and killed. The three of us had to remain focussed to survive with two more 6000 metre passes to climb in order to escape. When I stumbled into basecamp I'd been out for 17 days. I had frostbite, Fowler and I had boils, probably from starvation. Sustad had broken ribs. He retired from Himalayan climbing a year or so later.

The awful tragedy was one of the motivations to write my first book 'Learning to Breathe'. While the ascent was fantastic, my memory of it will always be tarnished by the tragedy of our descent. I only include it here because the climb itself was so inspiring.

Watch an extract from 'Distilled' by Hot Aches Productions in which Andy talks about Changabang below:

For a couple of years after the Changabang tragedy I stepped aside from such high level alpinism. I did a few fun free climbs like Moonlight buttress in Zion and some good trips to Patagonia, Torres del Paine and Fitzroy, Always trying to climb fast and light.

Pat Littlejohn tipped me off about the potential on Kjerag, Lysefjord Norway. We encountered incessant rain the first trip, but Leo Houlding and I returned and had a ball. Making the first free ascent of the Shield was a treat: 20 fine pitches over two days. Leo was just 18, but already you could see the potential and appetite he had for adventure. We had basejumpers zipping past whilst searching out crimps. It's where Leo decided he wanted to fly. The big stage doesn't phase Leo and he has great natural ability off the couch. I am relieved to hear he's slowed down on the flying front!

I've had six trips to Norway and made some really good friends. The potential over there is stupendous.

As a guide then obviously I spend a lot of time in the Alps skiing and climbing, it's a good playground even if it feels a bit like Disneyland at times - with all the telepheriques and choppers flying about.

All the best steep climbs on Mt Blanc are in Italy. I've shared some cracking adventures on this quiet side of the peak, Divine Providence, Jori Bardill directissima, Peuterey ridge, Brenva face, Cechinel- Nominee. I always fancied the Brouillard face. Dave Hesleden is as solid a partner as you could wish for on a serious icy mixed route in a serious setting. We first became friends after climbing the Dru Coulouir direct together in '88. Just getting to the base of the brouillard face in winter is an effort. As we ascended to the Eccles bivvy hut we saw a group of Ibex run through fresh powder, a magnificent sight!

We got caught in a proper storm at the Brouillard ridge. I was keen to push on. Dave pointed out we had no bivvy kit or food and our eyelashes were sticking together with ice. To survive in the mountains, you need to know when to go down!

Andy's verdict: A desert island climb would have to be one I hadn't done. The day might go something like climbing a magnificent mixed ridge to a fine summit, followed by a steep descent on stella powder down to a sea of grit boulders. There would be a pub nearby selling pints of Landlord ale and a load of mates.

Andy is sponsored by: Lowe Alpine, Rab, La Sportiva and Petzl. He is also a patron of the Jonathan Conville Memorial Trust. 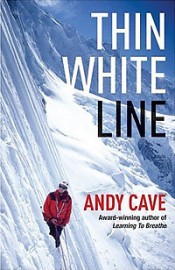 Andy Cave - An interview and extract from Thin White Line