The Making of a Carabiner: a visit to DMM

Share
Dave Gill and Mick Ryan 11th February, 2009
This has been read 11,069 times
Share
DMM, named after Denny Moorhouse, has been busy making climbing hardware since 1981. DMM started life in a small barn in Bethesda, near the slate quarries of North Wales. Now their factory is in Llanberis and DMM employ 130 people, making them the second largest employer in the local area.

The bread and butter of DMM's climbing hardware business is the carabiner - the simple snap link. This essential tool in the climber's rack can be taken for granted, but despite its simple appearance, hundreds of hours of design and work go in to each model.

The process involved in making a modern carabiner is detailed below in this editorial video.

VIDEO - The Making of a carabiner:

The making of a karabiner @ DMM Wales from Dave Gill on Vimeo.

SCENES FROM - The Making of a carabiner: 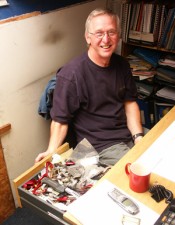 Questions For Chris Rowlands of DMM About the Phantom Carabiner

54ms
11 Feb, 2009
My net connection isn't fast enough to watch video, but in the shots the factory looks very old fashioned. In these days of kit being outsourced to China I find that very reassuring.
Alejandro
12 Feb, 2009
Press play, then pause straight away. Allow it to "buffer up" and load fully, then press play again. You should be able to watch it then. Quite interesting actually. I had no idea they put the carabiners in a giant vibrating machine, to get rid of the sharp edges!
Chris Craggs
12 Feb, 2009
Very interesting video - I don't think I'll try knocking my own karabiners up after seeing that! Makes you realise what good value they are. Didn't much like the look of the guy putting his hand in the machine that trims off the excess metal though! Chris
mark reeves
12 Feb, 2009
That explains all the no handed people in and around llanberis! ;-)
jon
13 Feb, 2009
'course, in the old days, Jimmy Jewel and Paul Williams used to bend the 11mm bar stock around their bare hands. Paul's hands were bigger than Jim's, so obviously he got to do the screwgates.
More Comments
Add Comment
Loading Notifications...
Facebook Twitter Copy Email LinkedIn Pinterest