In the hazy, distant past before the current pandemic, a team of Brits enjoyed their own form of isolation in a remote valley in central Patagonia. In January 2020, Simon Smith, Alasdair Fulton, Graham Dawson and Rob Lovell travelled to the Sierra de los Avellanos in the Aysén region of southern Chile. Their main objective was the 900m east face of the South Avellano Tower which dominates the stunning panorama of this still relatively untravelled massif.

After stagnant days of inactivity and frustration (we wouldn't expect readers to understand!), a weather window allowed the team to approach by 4x4, boat and on foot. A local gaucho's horses proved invaluable, carrying equipment and supplies part of the way to base camp. Unfortunately, an in-transit explosion of essential red wine put the future of the expedition in jeopardy.

'In a calamitous portent of things to come most of the toilet roll was turned to a burgundy pulp. Rationing and sheet prudence became necessary, panic-wiping and scurrilous stockpiling was a constant worry. In retrospect, it set us up nicely for our current pandemic privation....and at least the whisky stayed intact'

During intermittent weather windows while waiting for the main objective to dry out, a foray on neighbouring peak 'Cerro Squareface' yielded a good new 240m E3 6a for Ally and Rob which they named South East Face. Simon and Graham tried to add a new directissima to an established Crook/Bevan E3 on the same formation and solemnly failed in a nod to the route's now less ambiguous name; The Never Ending Story.

Once a storm enforced tent-bound lockdown had been lifted, the South tower dried up just enough to allow for a mad dash in a short weather window. On day one, following the only established route on the East face, Simon and Graham climbed and fixed ropes for Ally and Rob to ascend with bivvy gear to halfway ledges. On the second day in two teams, they made a summit bid on the 2018 Crook/Sim/McCune route (East Face Route E5 6a) climbing several great new variation pitches, both deliberate (Ally, E4 6a) and misguided (Simon, E5 6b). Upon reaching the top of the wall though still some 200m short of the summit, the team decided to retreat due to dwindling psyche and impending bad weather.

'We were really lucky to be able to follow the established route on the wall and utilise the abseil anchors to descend. With such a short weather opportunity we would have struggled with our initial goal of establishing a new free line on such a big wall! Big-up to the British first ascensionists, it's a great route and a mega piece of rock!'

In the remaining time in the area, a few intermittent dry days saw a further flurry of activity. On the unnamed needles adjacent to Cerro Squareface, Simon and Graham established 'Chicken Legs', 180m E4 6a. A route so named due to Simon's 'boulderer's physique' and pathetic inability to carry loads as heavy as the other guys'. Ally And Rob made several unsuccessful attempts on further new routes on Cerro Squareface but were turned back by gnarliness and loose rock.

Simon and Graham also made one final addition to Cerro Squareface, adding the 250m 'Falcor' at a very improbable looking E3 5c through some wildly steep terrain. The rock, while spectacular, also proved to be scarily loose in places and on the 3rd pitch Graham detached a large plinth which the belay-bound Simon only partly dodged. After deciding that the foot probably wasn't broken, the contents of the first aid kit were emptied into Simon's mouth and they pushed onto the summit. The descent/hobble back to base camp was described as 'less fun'!

The team would like to thank their new friends at Kalem Patagonia for sorting out the logistics and the asado parties! They were wonderful hosts and we couldn't have done it without them. Thanks also to Louis the gaucho and our excellent sponsors: Haglöfs, Osprey, Mammut, Edelrid, Crux, Basecamp Foods

Funding support for this expedition came from The Mount Everest Foundation 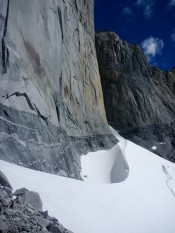 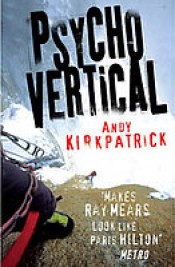 Patagonian Winter - A Puzzle of Stone