You can watch the full 30 min video of the adventure here: UKC Friday Night Video

The one sentence you don't want to hear at 2am on your ninth night on a storm-ridden Patagonian Big-Wall is:

“Can you give me a hand guys? My portaledge has collapsed”

This January and February myself along with Mason Earle (21, USA) and George Ullrich (21, UK) were in Torres del Paine in Chilean Patagonia attempting to put up a new free route on Cerro Catedral, an 850m granite face in the French Valley. The face has 3 previous aid lines, but last season Mason and I heard tell of El Cap quality rock and large and impressive features from ground to sky. The pair of us managed to persuade George to take some time off from university and on January 6th we all started our journey South.

Mason and I arrived on time and began organizing the massive amount of food and gear required while George battled against cancelled flights and crazy re-routing eventually arriving in town three days late. No rest for the wicked meant that we got on the bus early the next morning and along with 3 rather helpful porters we spent the next couple of days getting all of our gear to our base camp at the top of the valley in Campo Brittanico.

From here we soon found that the approach to the wall was around 4 hours but on the first climbable day we were at the base of the wall under a beautiful blue sky. Our plan was to start up the established line of 'La Escobar De Dios' (VI A4 5.10+, Fowler et al '92) and then break out left to some incredible cracks on the steepest part of the face. The first pitch is rated as A4 hooking on the original topo yet George put in an incredible effort to onsight the whole 55m pitch, quite possibly the hardest aid pitch ever onsight free-climbed!

We managed to fix 3 more pitches on some good days and all our gear was poised at the base of the wall. However the weather was far from interested in our efforts and we sat in our cave bivy for four days. Frustrated by this injustice we eventually decided to face the conditions and so we got onto the wall during a day of massive snowfall, hauling and leading through spindrift like we'd never seen to eventually get to our first bivy at 1am. Here began the fun as we realised that one of the joints of George's Portaledge had taken a knock during transport and couldn't support any weight. Exhausted and cold we decided to all bundle into the one solid ledge and spend a tightly-packed night trying to rest.

In the morning George managed to bodge the joint by lashing an ice axe to it and so the climb was back on.

It snowed every day and it rarely got above freezing, even in the ledges. However, we are sure that this is one of the greatest free climbs in the world, incredible rock and massive features with incredible views to boot. Some of the redpoints that George and Mason achieved were incredible feats given the bitter conditions and short windows of usable weather.

And so we reach the fateful ninth night. The wind was without doubt one of the scariest things I've ever experienced, after a few hours of the tightly tied down portaledge being held up with all the suspension straps slack one finds one's mind slightly frayed.

Once we'd rescued George and his gear into our ledge we tried to rest in hope that the weather would be better in the morning and we could take stock. However it never improved and so we made the best decision and began the difficult task of stripping our ropes and gear from our high point and descending the 15 pitches to the floor through upward driven snow and massive winds.

It's always disappointing to bail, especially from such an amazing route, but the decision was right and over the next three days that we spent carrying the bags out of the park the winds raged and it snowed almost constantly.

Overall we are extremely proud of what we achieved and the decisions we made. We believe that when the route is completed it will be one of the best and hardest free alpine big walls in the world. Being possibly the youngest team to ever climb wall style in Paine we are pleased to be one step closer to becoming old climbers and already planning our next adventures!

You can watch the full 30 min video of the adventure here: UKC Friday Night Video

The British Mountaineering Council and The American Alpine Club for their financial assistance, Namaste UK for matching our fund-raising for The Esther Benjamins Trust. For assistance with equipment the team would like to thank Buff and Lyon Equipment.

Furthermore Pete would like to thank Metolius , Evolv , Marmot and Black Diamond .

For more information about the trip and dates of upcoming talks please visit www.peterhodes.co.uk. 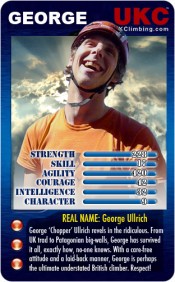 Finding my Place in Climbing