BMC Women in Adventure Films: have a watch!

New Topic
Please Register as a New User in order to reply to this topic.
Team BMC 14 Apr 2021 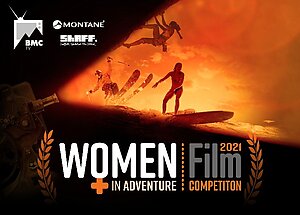 It's time to watch all the amazing Women in Adventure films entered for the 2021 BMC TV film competition! We’ve been flooded with a wave of fantastic fresh entries and have 32 new female-led adventure films to share with you. Ready, set, watch!

It's the seventh year of the competition and the entries are as strong as ever. Gaining more and more engagement each year, the competition, which runs in joint partnership with Sheffield Adventure Film Festival and sponsor Montane, aims to have more women in front of and behind the camera.

Just as exciting is the influx of films eligible for our newly added 🏆 Make A Difference Award, aimed at encouraging narratives that highlight the women and their projects that are promoting the important issues. Whether that be combatting the climate crisis, promoting sustainability, amplifying diversity, or uniting society behind a valuable cause through the outdoor community.

The winners will be announced and screened at Sheffield Adventure Film Festival 2021, with the hope that a real-life award ceremony as well as a workshop for those interested in the film industry will be able to go ahead on 9 - 11 July.

Not only will the winning film be screened at ShAFF and receive the top cash prize, but will also bag themselves free film entry into Kendal Mountain Festival and Banff Mountain Film Festival.

This year is set to be the best one yet. Don't take our word for it, see for yourselves! With all the films now out on our BMC YouTube Channel, we're excited to officially share these high doses of female-led adventure with you:

Report Sent!
New Topic
Please Register as a New User in order to reply to this topic.
Loading Notifications...