Skip over navigation
New Topic Reply to Topic
Please Register as a New User in order to reply to this topic.
Joe Browns/The Climbers Shop 27 Jan 2020 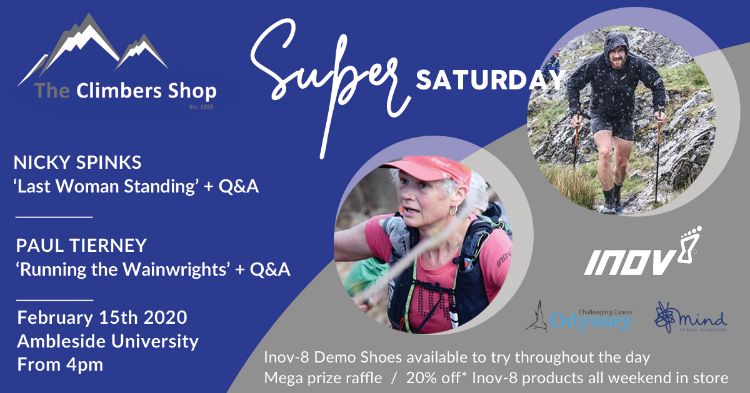 As part of our Inov-8 Super Saturday on February 15th, we are pleased to introduce not only one record breaking runner but two!

First up is Nicky Spinks’ film and talk on ‘Last Woman Standing: The Barkley Marathons 2019’. Paul Tierney will follow later in the evening with his film ‘Running the Wainwrights’. This ticket is for BOTH Nicky's and Paul's film and Q&A session.
Should you wish to book for just the individual tickets, this can be done so here: Nicky Spinks and Paul Tierney.

Nicky Spinks
The Barkley Marathons is the world’s toughest ultra-distance race. Only 15 runners have completed the full 100+ miles since it was first staged in 1986. This year saw one of the UK’s best ultra-runners, Nicky Spinks, attempt to become the first-ever female finisher. Made famous by a 2014 Netflix documentary, The Barkley Marathons see runners self-navigate their way around an unmarked course, tearing pages from hidden books as they go, and returning them to enigmatic event organiser, Laz Lake. Inov’8’s new film Last Women Standing: The Barkley Marathons 2019 follows Nicky, a 52-year-old breast cancer survivor and ultra-running record holder from the UK, as she tackles one of the world’s most notorious and secretive sporting events.

All proceeds will be going to Nicky’s chosen charity, Odyssey.

Paul Tierney
In June runner Paul Tierney completed a record breaking round of all 214 of Alfred Wainwright's Lake District peaks, in a record-breaking time of 6 days, 6 hours and 5 minutes. Inov-8 ambassador Paul completed a total of 214 summits and covered approximately 318 miles, breaking a new record set by fellow Lake District runner, Steve Birkinshaw, five years ago. Throughout this amazing feat, Paul has been raising money in memory of his friend and local athlete, Chris Stirling who tragically passed away earlier in the year. Paul saw the run as a way to raise funds and awareness for MIND UK. So far, donations have reached well over £30,000. Donations can be made via Paul's Justgiving page. Paul’s story is one that not only engaged the local fell running community, but also one that has inspired and amazed the wider sporting world.

Proceeds from this event will be going straight to MIND UK.

Join us for what is going to be an incredible evening in the company of two of the UK’s best runners.

**Ticket numbers are limited so book now to avoid disappointment!**

Please note: Tickets will not be posted. Please either print off your order confirmation or have this available on your phone to show a member of staff upon arrival. Please arrive within good time prior to the films start times.