Share
Michael Ryan 9th October, 2012
This has been read 6,524 times
Share
The winners are Alistair Gurney, Niall Dooley and Adam Wilson all of London. You can pick your tickets up at the door.

All readers of UKC and UKH can get cheaper ticket (Â£5 instead of Â£7) by entering the code SRUKCIP when you purchase tickets online.

More details and to buy tickets go to: www.snowandrock.com/tickets-ines-papert-lecture

German climber Ines Papert is a demon on ice, rock and in the mountains. This autumn, in conjunction with her sponsor Arc'teryx, she embarks on a lecture tour around Europe and this is your chance to win some tickets (and if you don't win you get tickets at a discount) for one of her UK lectures at Snow+Rock, the Covent Garden store, on 20th November at 7pm.

The expedition into Papert's world takes 90 minutes. She talks about conquering summits as well as about failures, about friendship and loneliness, hardships and moments of pure bliss ï¿½ a capturing presentation illustrated by spectacular imagery and video.

One highlight of the lecture is her visit to the amazing "City of Ice" in the Manchurian city of Harbin in China, with renowned photographer Franz Walter.

The city of Harbin has been presenting the international Ice and Snow Festival since 1985. This megacity in the Chinese northeast region is congealed for the whole winter at temperatures below -25ï¿½C.

On a space covering more than 16 soccer fields, a wonder world of ice emerges every winter: the gigantic towers, castles, bridges and cathedrals are built from solid ice, taken from the river nearby.

It took Ines and her team more than a year to finally obtain permission to climb this unique artificial world of ice. Ines describes the adventure in her lectures.

See Ines at Snow+Rock, the Covent Garden store, on 20th November at 7pm

First, all readers of UKC and UKH can get cheaper ticket (ï¿½Â£5 instead of ï¿½Â£7) by entering the code ï¿½ SRUKCIP when you purchase tickets online.

More details and to buy tickets go to: www.snowandrock.com/tickets-ines-papert-lecture

We have three pairs of tickets to give away to UKC/UKH readers. Simply answer the question below.

- This competition is only open to registered users at UKClimbing.com and UKHillwalking.com.
- Competition closes on 14th November at 09.00 GMT.
- The winners will be notified by email.
- Prizes will only be posted to a UK or Ireland address.
- The winners' names will be announced on UKC/UKH and facebook.com/UKClimbing

Ines will also be appearing at Kendal Mountain Festival on 17th November (buy tickets); Needlesports, Keswick on 18th November; and Outside, Hathersage on 19th November.

Want to win some Arc'teryx gear? Head on over to Snow and Rock

Franz Walter, who has accompanied Ines Papert on several expeditions, is an alpine photographer and video artist. His images of Ines' climbs in the Harbin's City of Ice are true works of art. The photographs will be shown for roughly two weeks at each venue and are also available on the project's website: franzwalter.com/harbin 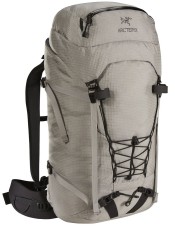 Arc'teryx Alpine Academy: Hauling someone from a crevasse

Arc'teryx Alpine Academy: Ascending out of a Crevasse