Win a pair of Adidas Solo Stealth with Outside Winner

This competition has now closed.
Back in 2011 adidas acquired the Five Ten brand and with it their legendary Stealth rubber, generally considered to be the stickiest rubber on the planet. The Solo Stealth is the first shoe from adidas to feature Stealth rubber on the sole.

In essence it's the same shoe as their popular Terrex Solo (designed in collaboration with the Huber Brothers), but now with Guide Tennie climbing ability.
Outside staff have been enthusiastically testing the shoe this summer. James Turnbull proved their climbing capabilities by nailing Sardine (7b+) at Raven Tor, after which he gave them an unqualified five stars (see full review here).

For your chance to win a pair of adidas Terrex Solo Stealth approach shoes all you need to do is answer the following question: 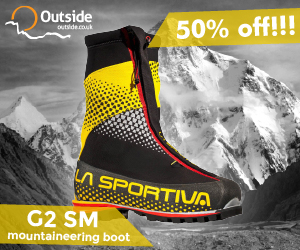 Outside The Panopticon: An argument for living and climbing without social media

Toerag
30 Jul, 2014
It's just a shame the tread depth is minimal and they'll be rubbish on most approaches for that very reason :-(. Why manufacturers can't put the nice vibram mountain commando sole with solid toe edge you find on mountaineering boots on their approach shoes I don't know.
Outside.co.uk
1 Aug, 2014
The chunkier the sole the more weight - it's all compromise. The review does mention that they can be slippy on wet grass: http://goo.gl/jBqr6f but James was so bowled over by their climbing capabilities he didn't seem to care! The new style 5.10 Guide Tennie has had the tread beefed up if you want to take a look: http://goo.gl/KM4nbg and it may also be worth keeping an eye out for the next version of the Camp Four.
Michael Ryan
1 Aug, 2014
Build quality is great, and they are OK for most approaches but not wet grass, they climb well too. adidas do a version with a rocker and more lugs, the scopehttp://www.adidas.co.uk/outdoor-stealth-shoes i had a pair of non-stealth terrex solos, the terrex fast and did a few alpine ascents in them. They took brutal abuse for 2 years and lasted well.
Michael Ryan
6 Aug, 2014
These are the boyshttp://www.zappos.com/terrex-scope
Add Comment
Loading Notifications...
Facebook Twitter Copy Email LinkedIn Pinterest