Toni Lamprecht has climbed yet another top-route:
"Pe'ahi is the name given to a big wave surfing reef break in Maui, called Jaws due to the
size and ferocity of the waves.
The new Kochel-Route in the South of Germany is called Jaws 11 due to the wave-like feature
of the rock, the height of the route and the ferocity of the moves. It is the home of some new-school-climbing including jump-moves and frequent compression bouldering sections, where many specific body and weather conditions must concurrently occur. Although the project is not 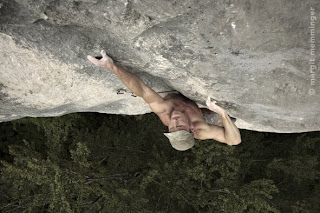 exactly new (I placed the bolts already 15 years ago and played around on the moves once in a while) I started to attempt it more seriously in autumn 2008. After a successful boulder-winter I was able to link all the sections in the beginning of
Mai after working the route for a couple of weeks.
Character: After starting at 15m height with a boulderjump and a hard section following the lip of a fishmouth-looking rock-formation you reach a decent rest. The second part of the route is a hard boulder-sequence that involves a lot of body- and sloper-power. 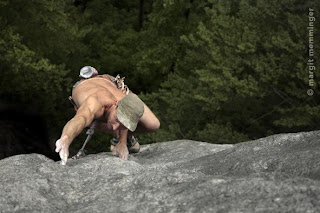 Jaws 11 is a strong contender for the hardest route I have climbed in the area Kochel with a grading potential up in the French 9th grade. Future will show what other climbers will think about the exact grade.
I also managed to do Katze auf dem heißen Blechdach, 8c, a tricky route with a double-dyno finish."
Photo 1 & 2: 'Jaws 11'
Photo 3 'Katze auf dem heißen Blechdach'
All by Margit Memminger