A great man such as John Bachar deserved exactly the send off (memorial) he got yesterday, Monday, July 27, 2009, at Mammoth Lakes, California. Friends drove prodigious distances and flew in from various western states to be present. As many commented, such a collection of American climbers in unlikely to ever reconvene.

On this difficult day, I was witness to a few miracles. I had struggled with accepting that my childhood friend and climbing partner, John Bachar, was really and truly gone. When I first arrived at the memorial, I suddenly felt like I was drowning. If it wasn't for the immediate intervention of Jody Langford and Karl Baba, I would have been in for a very long afternoon. Thanks, boys.

Next, the climbing community can count itself blessed to have Rick Accomazzo. Ricky Emced the event (that ran for better than three hours) and was the emotional glue that held together a situation which in less sure hands could have gone south in a hurry. Ricky's personal memories, poignant commentary and steadying presence behind the microphone set a tone of openness, strength, and, in a word, love, that transformed a potentially dire situation into a rare kind of celebration. I always counted myself grateful to have Ricky as my hometown climber partner. Yesterday, I was proud of him as a human being.

I was especially impressed with the presence of John's immediate family – his father (I cannot imagine having to burry a child), brother, sister, son Tyrus, Tyrus' mother, and John's girlfriend. I now understand where John got his courage. I very much appreciate John seniors (John ll) words to me.

I speak for everyone when I say we were all honored to have Royal Robbins drive all the way there from Modesto and speak to us about John. Early on, Royal was like a God to us, the climber we all aspired to be. Having Royal on hand was like having a high priest there to sanctify an event few of us could really fathom. Rather than cower us with pronouncements, Royal kept things personal, human and real, and we were all much the better for it. Thank you, Royal.

Throughout the event I saw the outpouring of grief and good will cut through whatever differences might have arisen between people. At various times I found myself recounting the most fantastic memories with people with whom I, sadly, had grown estranged for reasons ranging from entanglements and petty misunderstandings to nothing at all. In the process I got reconnected with the people around whom I was formed. I touched into myself in a vital, half-forgotten way and recalled where I came from. These things will serve me for the rest of my life.

For all of those who were not there, I trust your presence was felt and your thoughts and feelings made real to John because that's the way we all roll.

I hope that those who took pictures will take the time to share them with all of us.

And to my friend, John Bachar – I'll be seeing you later. Till then: 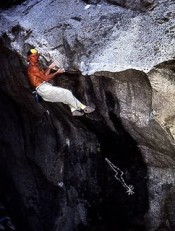 TobyA
29 Jul, 2009
Having only recently got back from a few weeks holiday, last night I was flicking through the three copies of the Economist that had piled up in my post box. I was delighted and surprised to see that the July 16th obituary was for John Bachar, "The world's greatest free-climber, for whom grace was all" and it was all about why style and grace counts for more in climbing than getting to the top. The link is here: http://www.economist.com/obituary/displaystory.cfm?story_id=14029915 I hope it is viewable to non-subscribers. Just to add the context; the Economist is a weekly paper and only does one, full page obituary in each weekly edition. If I remember correctly, the weeks previously had been Michael Jackson and Robert McNamara, and the week that followed was Walter Cronkite. Esteemed company indeed John! RIP.
london_huddy
29 Jul, 2009
Thanks Toby, good tip, I'd missed that.
Richard Hall
29 Jul, 2009
http://www.telegraph.co.uk/news/obituaries/sport-obituaries/5895468/John-Bachar.html
Tall Clare
29 Jul, 2009
There was an interesting thread about that particular obituary here: http://www.ukclimbing.com/forums/t.php?t=364148
TobyA
29 Jul, 2009
Thanks Clare. I missed that when I was away on my hols. It is a measure of the man that he got really quite a number of high quality obits in the upper echelons of the mainstream media.
More Comments
Add Comment
Loading Notifications...
Facebook Twitter Copy Email LinkedIn Pinterest