Share
Björn Pohl UKC 6th February, 2010
This has been read 3,415 times
Share
A while back, Iker Pou made the 2nd ascent of Chris Sharma's Demencia senil, 9a+, at Margalef. I decided it was time to ask the man a few questions. Big thanks to Iker of course, but also to Cedric Larcher, from Kairn, who has translated the interview to and from Spanish.
I know he's gone back to make a video, so hopefully we'll see it soon.

To be able redpoint this route, you've been climbing indoors in order to gain the strengh needed. Do you think there is a limit to the strength you can have while climbing only on rock? Why?
You can reach the same lever of strength or more than if you train indoors. But the process takes more time than if you do it indoors. It's really more effective if you train a few hours well planed indoor than a whole day outside.
The train process when you climb indoors is much faster, but you also need to keep in mind that you lose a lot of technique and visual ability.
For me, I prefer to climb outdoors and enjoy it even even if it means spending more time to reach my goals.

Nearly 10 years ago, after working a lot, you repeated Action Directe. Is there something similar in the process? Have you learnt a lot about the strategy of redpointing routes in these 10 years?
There are not a lot of things in common comparing the process used 10 years ago and now. In order to redpoint Action Directe, I trained hard and a lot, but without a real control. At that time, I was very young, and there was no such knowledge about training as we have now. I trained more on feeling basis.
I think that when I did Action, I came over-trained on the route, really tired by my training.
That was a long time ago, and I think I learned a lot about climbing and training.
Actually I rarely train indoors. Although in special moments like this year, I spent 3 weeks training indoors because of the bad weather. Nearly always I climb and the rocks, it's my way to train. It's not as efficient as training inside, but what I like to climb is in the mountains.

Are you a much better climber now compared to 10 years ago? In what way?
I think that I'm a somewhat better climber now. I have gained a lot more experience of rock-climbing since that time and I climb a bit more powerful and dynamic now.
I would not say that I am stronger, but like I said, I have a lot more experience,and I think that is very important for climbing.
Each experience helps me to know my strengths and weaknesses better. This makes me climb more with my head than a few years ago. After all those years, I've understood that the body is not able to take the same amount of stress during the whole year. You need to know how to plan your seasons and to enjoy other things when the motivation is not here. 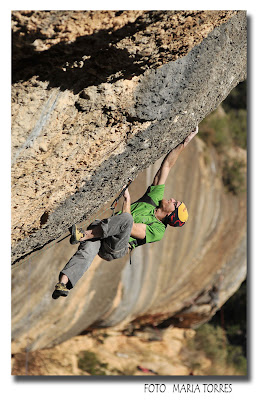 What is your training like?
I have no specific training. Everytime that I can I go climbing, and follow the type of activity I want do in the future. I will focus more on bouldering or resistance.
Usually, I work on resistance trying directly a route. The strength, I use to train it working a lot on boulders, and for aerobic, I use to go jogging a lot.
The basic training is to climb as many days as I can. But there is nothing planned, and I most often do bouldering as it is the thing I like training the most.

You redpointed 9a+, did 8b+ onsight, 8B+ bouldering, and 8c+/9a multi-pitch routes. Is there something that you prefer? Do you change your mental training for your goals? For exemple, in order to do Orbayu's crux pitch or Demencia senil?
The kind of climbing that I like the most for the moment is the big wall. This type of climbing is the one that most fills me with satisfaction. I really like to go on expeditions with my brother Eneko and other friends for putting up routes and for discovering new places.
I really like sport climbing too, but after a few months, it can bother me, and I can lose my motivation. So I have to find new challenges that should most of the time be in alpinism.
I am not used to doing any mental training for my goals. But I use to focus a lot on what I am doing or trying to do at the moment, and to focus all my energy in reaching my goal.
For Orbayu, It's been very hard. The crux pitch is very hard from the ground, really exposed, and we had to really make sure we knew what we were doing in order not to have a big fall. You are not preparing yourself specifically, but you don't go as relaxed as you would be in Demencia senil, where falling is not risky.
Psychologically Orbayu was a lot more difficult than Demencia senil and it also cost me a lot more tries.

What do you think about routes like Eternal flame and Tough enough?
This kind of challenge is what attracts me most at the moment. To free routes on big walls and most of all to climb walls in alpine style.
For Eternal flame, I have been there, and I think that I won't try again to free the two pitches that my brother and I didn't manage to do.
There is still a lot of different mountains to know for not going twice. We did the summit, but the bad weather made it impossible for us to redpoint two of the pitches.
In the future, we will try more challenges in alpine style.
For Tough enough, I would love to try it. It's a place where I've been and from where I have good memories. I would like to go back there. I saw pictures of the route, and it motivates me to go and try.

Is the preparation important for you?
The preparation is important, but the most important is to have a positive attitude in front of the challenge. You have to be motivated, because if not, you can be 100% prepared, but you still won't do it. For that reason, I think that in climbing, as in a lot of sports, 50% of the success is in your head.

What would you say is your speciality?
I am not able to tell you concretely. But in case I had to opt for one, I would say multi-pitch climbing.

Do you know the Facebook group Yo tambien pienso que Iker es el puto amo (~I also think Iker is the boss)? Any comment?
I heard some comments, and the truth is that it makes me smile.

One Grain of Sand - Moorland Climbing