Dave MacLeod Is Back - 8c After Foot Operation

Share
Jack Geldard 6th February, 2013
This has been read 14,469 times
Share
Dave MacLeod suffered ankle and foot injuries in a climbing accident last autumn, but has returned to form very quickly, climbing an 8c sport route on a recent trip to Spain.

Dave's accident occurred when was lowered off the end of the rope whilst sport climbing, falling just a few feet, but clipping his foot on a ledge.

He reported on his blog last October:

"It turned out, the 6b+ slab was quite long and the rope I was using which wasn't mine was a little short. As I got lowered off, the rope ran out about 6-8 feet above the small ledge at the start of the route proper. Neither of us noticed in time and so I plummeted, clipping the ledge with my foot and somersaulting down the turfy scrambling ground below, eventually coming to a violent stop wrapped around a birch tree on the slope below.

As I was flying head over heels I was wondering what the hell was going on! Normally I always take a long rope to the crag so rope length issues don't arise and it hit me that the borrowed rope I was using must've been too short and the end had gone through the belay device. For a minute or two I thought I might have got away with it but very quickly my right foot started to get bigger and severely object to being weighted."

Dave has been blogging about his surgery and recovery over the last few months and has now got back to enough health to enable him to climb.

On a recent week long trip to Spain, Dave has managed to redpoint an 8c called Malsonando at Gandia in the Costa Blanca.

"During the week in Spain I have been doing some 7b and 7cs onsight just to get into the flow of climbing again, but I was also keen to see just how far away from recovering my form on harder routes. So I tried an 8c called Malsonando at Gandia.

I had no idea how I'd get on. Before coming out, since starting climbing again I've had 6 weeks or so of some indoor climbing and started from a very low base of fitness and very gentle climbing on easy ground at first. I did manage to climb the 8a endurance circuits in TCA Glasgow and in the past I've found that if I can do 8a indoors I can usually do 8c or even 8c+ outdoors. Folk sometimes find that weird and don't understand it. Partly it's because my hands sweat quite a lot and so climbing outside in cold conditions allows me to climb a lot harder. However, the main reason is I'm not that strong and so struggle more indoors where I can rely on technique more outdoors.

Anyway, the rule held true and yesterday I was able to climb Malsonando in pretty bad conditions which I was very happy with. My endurance is still barely off the baseline level and I got quite pumped well before the crux, but it's definitely a good place to be 2.5 months after the surgeon was drilling into my Talus." 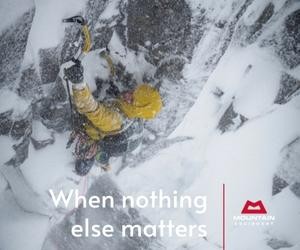 This week's Friday Night Video is Dave MacLeod's short film that documents his time on Neil Gresham's Lexicon (E11 7a) on Pavey Ark, Lake District. The route has now had four repeats fr...

Dave MacLeod has made the third ascent of Neil Gresham's Lexicon E11 7a at Pavey Ark, Cumbria. The route shares the start of Impact Day E8 6c up to a break, before leading straight up an overhanging headwall on small crimps with marginal...

Robbie Phillips has added a new E10 7a to Duntelchaig crag, Invernesshire, which he...

Dave MacLeod has made the first ascent of a bold new Ben Nevis E9 6c on Titan's Wall, Carn Dearg...

Cameron94
6 Feb, 2013
Good to hear. Does anyone know if Dave has big plans in the pipeline for this winter?
Mark Collins
6 Feb, 2013
Thanks for the this. I feel less of a d*ck now for being involved in a similar accident, using someone elses rope many years ago. Glad Dave is well on the mend, and it just goes to show that anyone can make a mistake. You just can't be too careful out there.
Scarab
6 Feb, 2013
Wow, if he can do 8a indoors he can do 8c outdoors. That is indeed odd but makes sense.
steveriley
8 Feb, 2013
Over on the other channel we find he's signed up for the West Highland Way. Awesomeness http://www.ukclimbing.com/forums/t.php?t=531112&v=1
Add Comment
Loading Notifications...
Facebook Twitter Copy Email